Because whether or not Froome was doping, it doesn’t matter.

When the news broke that Floyd Landis had been caught doping, I was mid-way through a ride of RAGBRAI, the massive community bike ride that snakes its way slowly across the Iowa plains and hills. 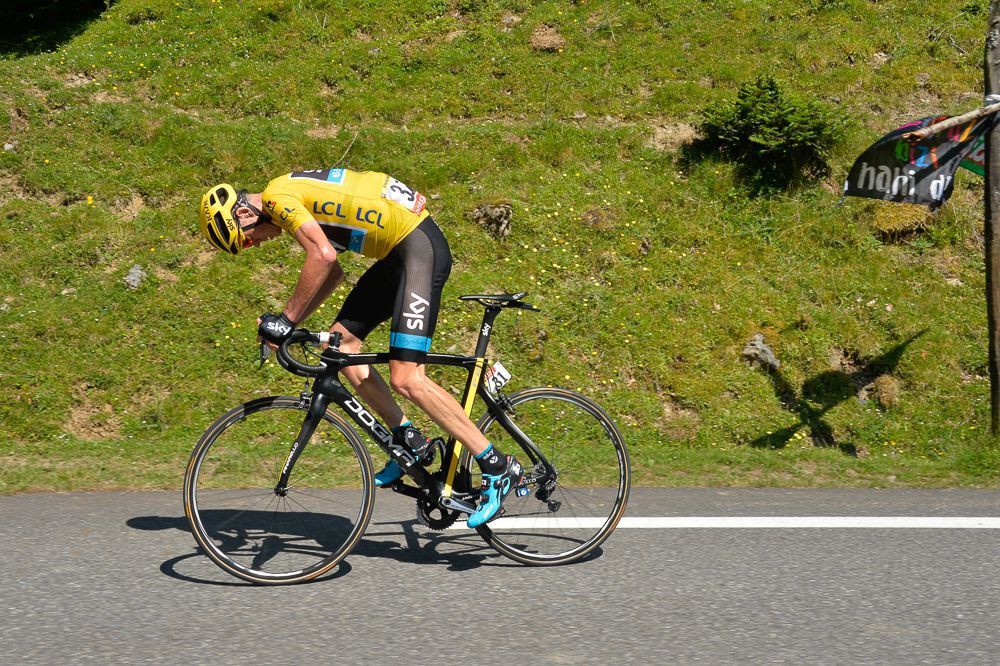 I had, in fact, just spent a miraculous few-dozen miles riding alongside Tour de France hero, Lance Armstrong. To help promote Livestrong, Lance decided to organize a group to do RAGBRAI and he spent his days cruising at high-speed through the country with a peloton of attendants and fanboys.

I was one of those fanboys, and when my ride partner’s wife called to say that Lance had just passed her about a dozen miles before our current position, we figured it would be our chance to ride with a cycling idol.

We found a climb that was steep enough to shed the week riders and waited for Lance to crest the hill. We could tell he was coming a mile off from the noise his group generated, the hoots and hollers of those who recognized him were deafening.

Hitching on we rode at speeds in the high twenties, pulled along by the vortex of celebrity. At one point a young boy on a kid’s sized road bike pulled toward Lance to say hello. We told Lance that a kid was trying to ride to him and the group slowed and parted so that Lance could put his hand on the boy’s shoulder and chat with him while they rode down the Iowa plains at twenty miles an hour.

Sweat was still dripping from my head after my ride when I heard the news about Floyd.

Certainly, this can’t be true, I thought. Certainly, he’s not a doper. Lance, the hero I’d just rode with was suspected of doping forever, but he’d never tested positive, right? How could Floyd have doped? Surely if Lance was innocent so too was Floyd.

You see there was an era of cycling when heroes proved to be demons and those demonized turned out to be heroic. It wasn’t fair, it wasn’t just, but it just was. We were told, in those days, that the race was largely clean. After all, hadn’t the Festina affair cleaned out the dopers? Hadn’t the purge of Operation Puerto rooted out the few rotten apples that were seeking to destroy a good and a noble sport?

Phil and Paul would watch Lance race up a hill faster than anyone else in the peloton—faster in fact than anyone in any peloton had ever raced that hill—and tell us that his cadence was so high, his focus so clear that he could ride and ride and ride. He had a high threshold for lactic acid, he had super-human lungs that could infuse him with oxygen far more efficiently than anyone before.

They’d become excited to the point of stuttering as Lance passed his rivals, broke records, broke his competitors. When Lance stopped to berate someone in the middle of a race, they brushed it off as words exchanged in the heat of the moment.

From my particularly good vantage point to watch the Tour de France this season (I own a coffee shop with a branch inside a local bike store—we broadcast the Tour daily on a big projection screen) I had a better-than-usual chance to reflect on the ins and outs of the race.

This, the commentators told us would be the year that cycling would return to its clean roots. (Ignoring the fact that cycling has never been totally clean.) Leading into the Tour’s first day the same commentators who told us that Festina and Operation Puerto were a thing of the past told us that this year, this tour, this very moment we were seeing the Tour as a clean and new being. A bright and shiny new race full of people who grew up clean and raced clean.

Cut to the interview with Tejay. Cut to Jonathan Vaughters. Cut to Bob Roll bouncing and pontificating about how these new riders grew up in an era where doping was demonized and the sport was finally, finally clean.

And for the first few days, the 100th running of the Tour de France looks pretty darn clean. Riders are suffering. Previous champions like Contador (doper!!!) and Evans fell off the back. On small climbs, the riders would fall apart in the way that we expect clean riders to fall apart.

And then it happened. On a powerfully brutal climb up Col de Pailheres on Stage 8, newcomer Neiro Qunitana from Movistar powered his way up to glory. Phil and Paul cackled with delight as this new rider, this Colombian climber with youth in his legs and altitude in his blood climbed his way to the top of the first climb.

And then the Tour’s favorite Chris Froome rocketed past him, climbing better than the younger, and lighter, Quintana. Phil and Paul told us that Froome was looking amazing. His cadence, they told us, was so high and efficient. His focus so good.

And then on Ventoux Quintana went off again and Froome again was alone able to match him. Paul explained that “Froome…was born at altitude” as if his place of birth extended to him a power, just like being born on Krypton would make Kal-El able to leap tall buildings in a single bound.”

It was during the final real day of the Tour, the climb up Annecy-Semnoz in Stage 20 when Froome rocketed away from his support riders and rode up to Quintana that the cyclists around me all started to make noises of disbelief that I’d heard before. And that’s when I realized that we’re watching the Tour all wrong.

Professional sports, be it cycling or baseball, skiing or football, they’re all recreation.

When you or I play softball for our corporate team, that’s sports. When we race the local crit for points or beer or a small trophy of little significance, that is sports.

But when highly paid athletes compete, it’s recreation. The input of the fame and the money and the media scrutiny makes it as much about sports as Brittney Spears is about music.

The sound I heard the fans make when Froome activated some sort of mutant power to sprint up to Quintana in Stage 20 was the same sound that a table full of craps players makes when the table craps out. It’s the sound that blackjack players make when they hold 19 and the dealer pulls 21.

And that’s because it’s the same thing. It’s the sound of a group of people realizing that the odds are stacked against them, that the house is winning. That the game is fixed.

Because whether or not Froome was doping, it doesn’t matter. We can no longer separate true victories from those purchased from a doctor.

And in a way, that’s okay. As long as we’re willing to look at the Tour and at professional cycling differently. Professional cycling is a massive conglomerate full of parties that are interested in making money and in keeping the game moving ahead.

And so are the casinos in Vegas. But that doesn’t keep people from flocking there. Ask anyone in a casino in Vegas and they’ll tell you they know that the house always wins, but they, they will be the exception to that rule.

We want our sport to be the exception, except in many ways it can’t be. You can’t ask human beings to ride twice up Alps d’huez and have all of them be 100% clean. When people ask me why some professional cyclists dope, I have to explain where many of these european and slavic riders have come from and that winning is the only way they have to raise the quality of their life and make a future possible for their families. If winning has to come in a bottle, so be it.

Here in the states, we have the luxury of being able to do club rides. We can do crits around industrial parking lots and it’s all about our passion for the sport. But that’s a myopic view of professional cycling and it’s not accurate, nor will it ever be.

But from the Vegas point of view, it doesn’t matter. If we watch the sport from the perspective that it’s all a show, that we love watching guys struggle their way up and down mountains and sprinting to finishes. If we take our joy in the drama that is the pain and the glory of riding for three weeks in the rain or sleet or sun, then it’s different.

It’s all a big show, it’s all a big display of herculean effort. If we watch the Tour as entertainment, instead of a pure exhibition of sporting fitness it becomes less of an issue if someone is doping their way up the hill or if they’ve ingested a bit of testosterone with their steak or on purpose.

We need to watch the Tour and professional cycling like a battle between the great gods on Olympus, some of whom would lie and steal and cheat in order to defeat each other. And in that case, the doping is part of the spectacle. It’s part of the show. Watching people crowned and dethroned is part of the Tour, not something that we’re going to get rid of.

Fighting against doping becomes as much a part of the race as fighting to get a better aero position, or doing a mid-time-trial bike change to get a bit of advantage.

It doesn’t matter if Froome was doping because as spectators there’s nothing we can do about it. We can watch him crest the hills under wings of glory and then later watch to see if he flew too close to the sun and those wings shatter and fall off.

In that case the Tour is beautiful, even if it’s full of cheaters. It’s glorious to watch Cadel struggle his way up a hill and it’s glorious to watch Froome rocket up the mountains. It’s all the same as time spent in the casino, a momentary distraction designed to enrich our lives, albeit with a bit of a cost. The energy we spend watching the Tour is the psychic version of the capital we spend to play Pai Gow Poker at The Venetian.

Froome was doping. Froome wasn’t doping. Who cares. Froome rocketed up the mountain alongside a small unknown Colombian cyclist that we never heard of before, and now both of them are part of the fabric of cycling. Maybe Quintana was doping. Maybe Contador was. Who cares?

Take from it the beauty and the motivation of the race. Absorb the ritual of respect and the power of the pack. Forget the dope, forget the cheating. Just watch the Tour to love it as a whole. There will always be fragments to rally against, but there will also always be the beauty and passion.

And nothing can take that away.