Branding and style. It’s how manufacturers enhance awareness in consumers…creates a perception of continuity, ties the products together. Apple is an absolute master at this. Branding is why you have a good feeling about the Apple Watch because you already like your iPhone. It’s why Chevrolet is so careful about updating the Corvette. It’s also why fake brake scoops end up on plebeian family sedans, and how Donna Karen New York makes almost as much money off cheap DKNY t-shirts as they do luxury goods. Branding is also why SRAM burdens all of the Rival and Force cranksets with a stupid hidden 5th chainring bolt.

You see, when SRAM updated their flagship road group Red in 2012, they decided to go with a 5-bolt/4-arm design similar to Campagnolo’s classic Record crank. The 5th chainring threads through both chainrings into an aluminium insert moulded directly into the back of the rightside crankarm. Ostensibly by eliminating the fifth arm of the chainring spider, you reduce weight and improve stiffness. There is no reason to doubt this approach, but arguably advances in carbon manufacturing and chainring design have had at least as great of an effect. Indeed, Campagnolo has recently followed Shimano in going to stiffer chainrings supported by 4 rather than 5 chainring bolts. Regardless, the Red crank was a suitably bold update and apparently has been successful. The problem is how SRAM decided to trickle down Red’s styling to the mid-level carbon Force and aluminium Rival cranksets.

Both of the lower-range cranksets rely on modular spiders, no doubt for the easy (read: cost effective) option offering both 110mm and 130mm bcd spiders (compact 50/34 tooth and standard double 53/39 tooth chainring sets respectively) for the same crankarms. SRAM is certainly not the first to do this, and I’m not sure that one should assume that this entails a meaningful performance penalty. But SRAM chose to clock the 5-arm spider with one arm hidden behind the crankarm. So you still have the same number of crankarms (ie no weight reduction or increase in stiffness), but now one of them is way less accessible. Plus since a mechanic can’t insert a tool into the chainring nut to prevent it from rotating, the 5th nut is made with a knurled, oversized flange such that it jams into place semi-permanently.

Perhaps none of this matters to the typical consumer using these cranks on their 2x road drivetrain, as it rare for all but a few road racers to fine tune their gearing with chainrings rather than cassettes. The users most likely to complain are riders who use SRAM 1x drivetrains, cyclocross riders in particular. On my 1×11 gravel bike (which I also use for CX) I will change out the ring depending on the amount of climbing or technical riding I expect at the event. I keep a spread of 38, 40, and 42 tooth rings for use with 10-42, 11-36, and 11-42 cassettes. I’m not happy about proprietary chainring bolts and awkward access, and I bet other racers and team mechanics feel the same.

One last consideration is the proliferation of oval 1x chainrings such as Absolute Black. Their 110 and 130 oval rings are manufactured to position the point of greatest leverage just before the crankarm rotates past 3 o’clock for conventional 5-arm cranksets. A hidden 5th arm design would clock the ovalization just like the now-disavowed Biopace from Shimano in the late-1980s.

What to do about it? Well, you could buy someone else’s crank, or you could buy SRAM’s S900, a non-series carbon crankset that is nevertheless quite similar to Force…only without the nonsensical hidden arm and chainring bolt. Scratch that, you could just find an S900 spider and swap it onto the Force crankset. This is what I’ve done, and it works perfectly. But don’t take my advice; I just noticed that the recent US national CX champion Stephen Hyde uses similarly modified SRAM Force cranks. 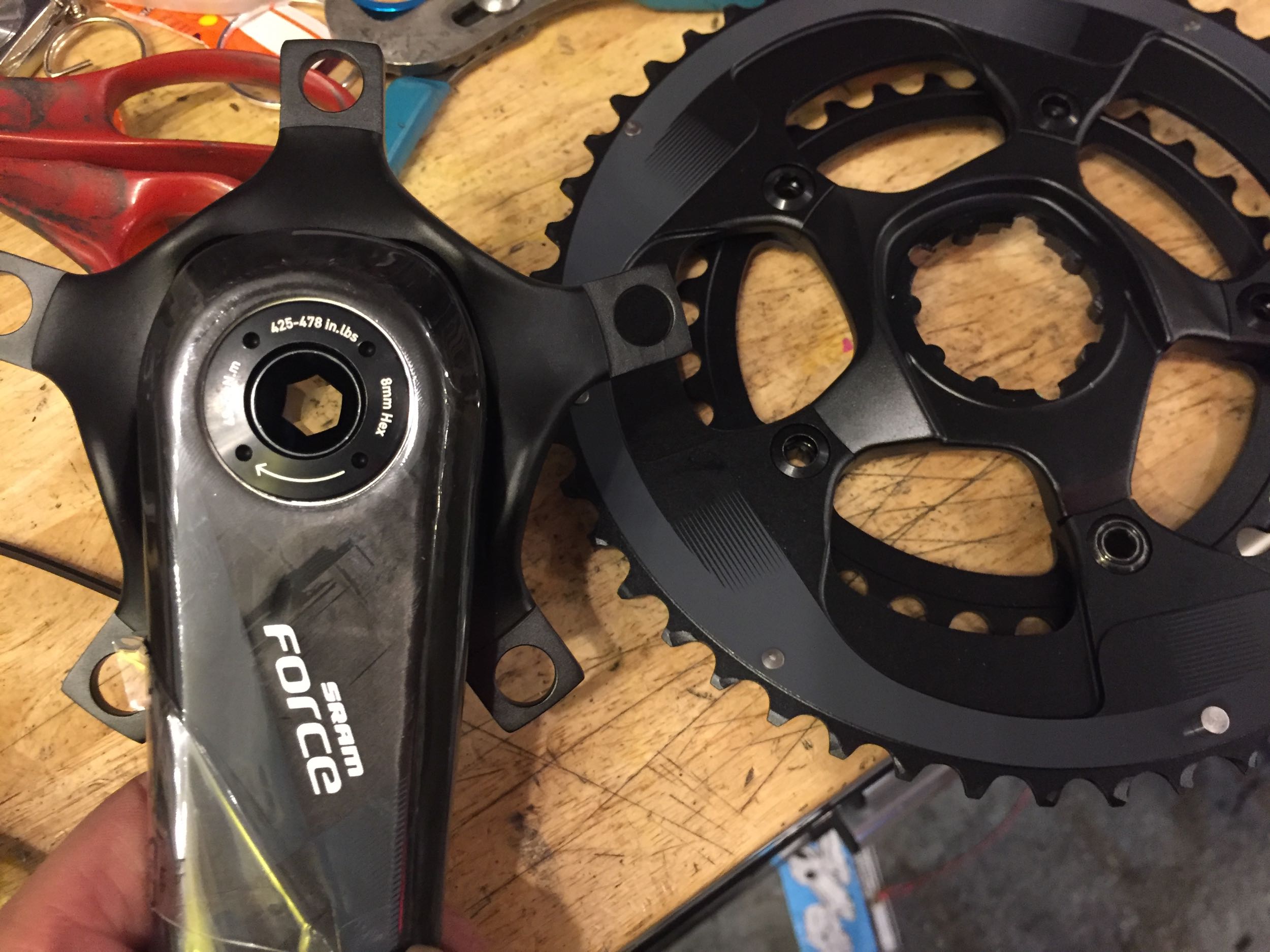 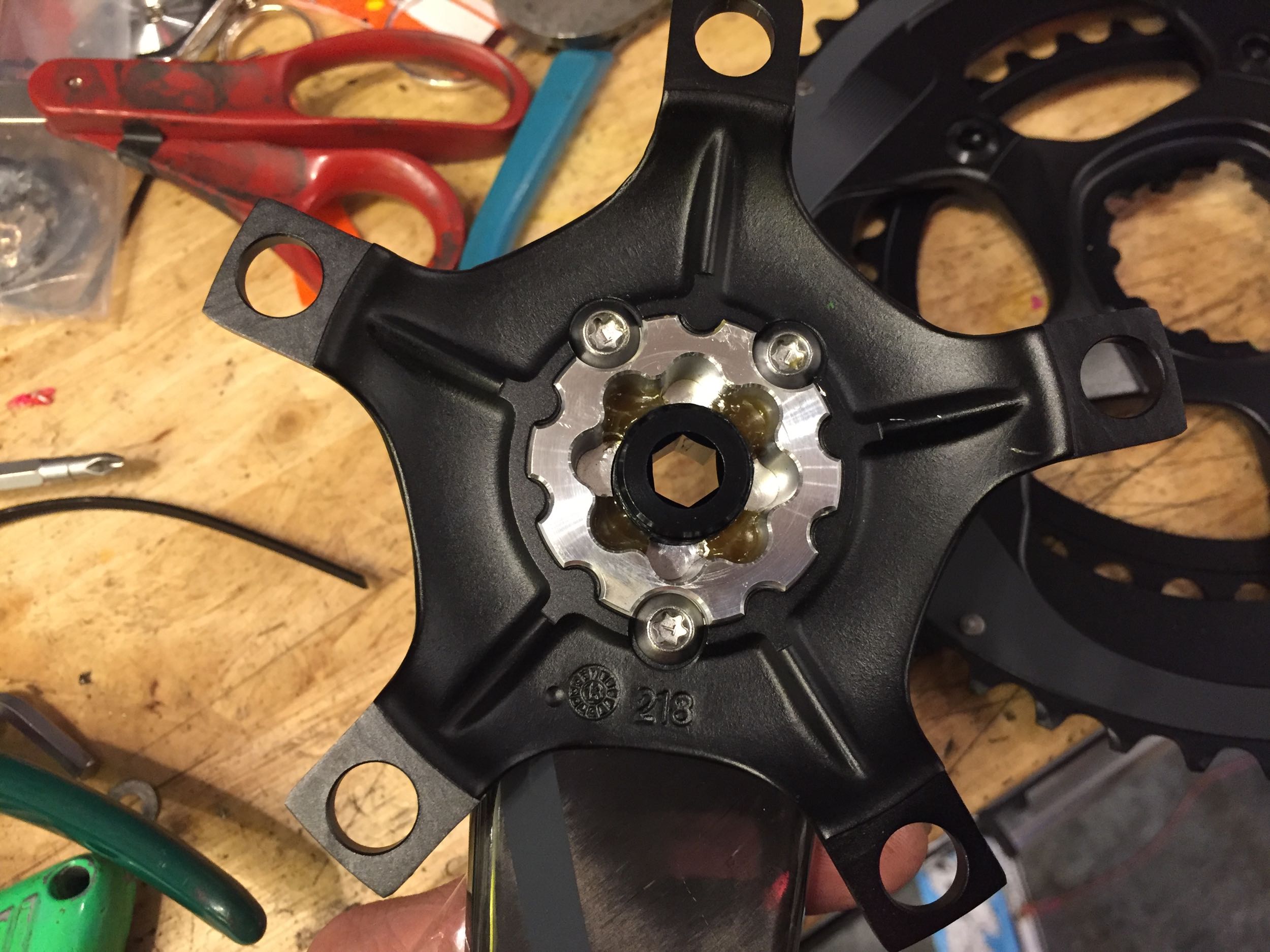