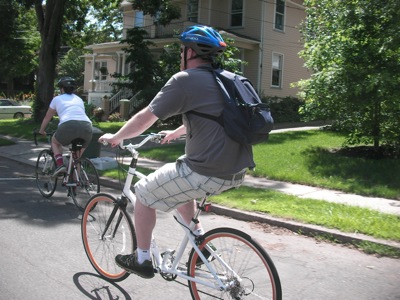 As I wheeled the white-glossy finished Electra Townie Sport 105 out of the bike shop, each employee in turn stopped to comment on the looks of the bike. The strikingly casual frame coupled with a great point job and orange-rimmed wheels is a knockout.

To explain though, let me step back a bit.

Bikes like the Townie are traditionally designed to serve the needs of the very-casual bike rider, the person who occasionally rides to the local store/bar/coffee roaster/Quiznos for errands, or to cruise along a beachfront community. To that end, this class of cruiser bike is often heavy, fitted with coaster brakes or other cheap stoppers and ill-equipped to tackle hills.

Electra has carved out a niche by making pretty and functional bikes that happen to look nice and don’t cost a fortune. But the bicycle market is full of upscale potential for a company that sells a lot of product to the affluent beach house-owning crowd and the Sport 105 is their effort to tackle the advanced needs of these riders without forcing them to switch to a full-on road bike.

The high handlebars make the Sport 105 clearly a recreational bike, but that’s fine with most riders in this class. In the few months we had the Sport 105 for review we put a number of riders on it. All were impressed immediately with the look of the bike, but many were thrown off by the handling. The super-high angle needed to keep the bars so upright makes the bike a poor climber for most, however that had a lot to do with the frame size, which was too large for many of our testers (myself included). As a result we were positioned poorly on the bike for much of our test ride and ended up losing power on the climbs.

The frame size was perfect though for my friend Jason, the founder of a so-called “bike gang” in Brooklyn called X-Speeders, Jason spends most of his time riding with his hipster friends across Brooklyn on second-tier mountain bike and other urban treasures, often clocking 30 mile days on what most high-end cyclists would call junkers. Jason’s been looking to upgrade his bike, but not to a full-on road bike, which is impractical in the city where start-and-stop riding is often the norm. (And where bike rides to a bar are so common.)

I put Jason on the Sport 105 and he immediately felt at home and praised the handling of the bike in the same ways that I had dismissed it, the larger geometry fitting his frame much better than mine. Jason was able to power up hills that found me unable to gain purchase thanks to his correct positioning on the bike.

We rode for some thirty miles, with a few breaks to stop for coffee and snacks, and the bike performed without skipping a gear or missing a beat. Where I had been skeptical about the Sport 105 I could now see the immediate benefit. He’s a bike that looks like your typical urban cruiser yet performs like an entry-level road bike. For a lot of riders, this is a perfect match.

The frame design is eye-catching, with a front derailleur peg that’s integral to the bottom of the frame being necessitated in order to attach the external shift mechanism that’s part of the 105 group. It doesn’t make the frame look awkward so much as different. We had several offers from people to sell them the bike based on nothing but looks alone.

At about $1300 the Sport 105 might be out of the price range of the typical urban hipster, but not out of the range of his time-share owning biking compatriots, and that’s who the Sport 105 is aimed at. The bike, after all, is cheaper than many road group sets alone, and it’s an able performer.

It’s unlikely the bike will ever win a crit, though it might do well in a town-line sprint.