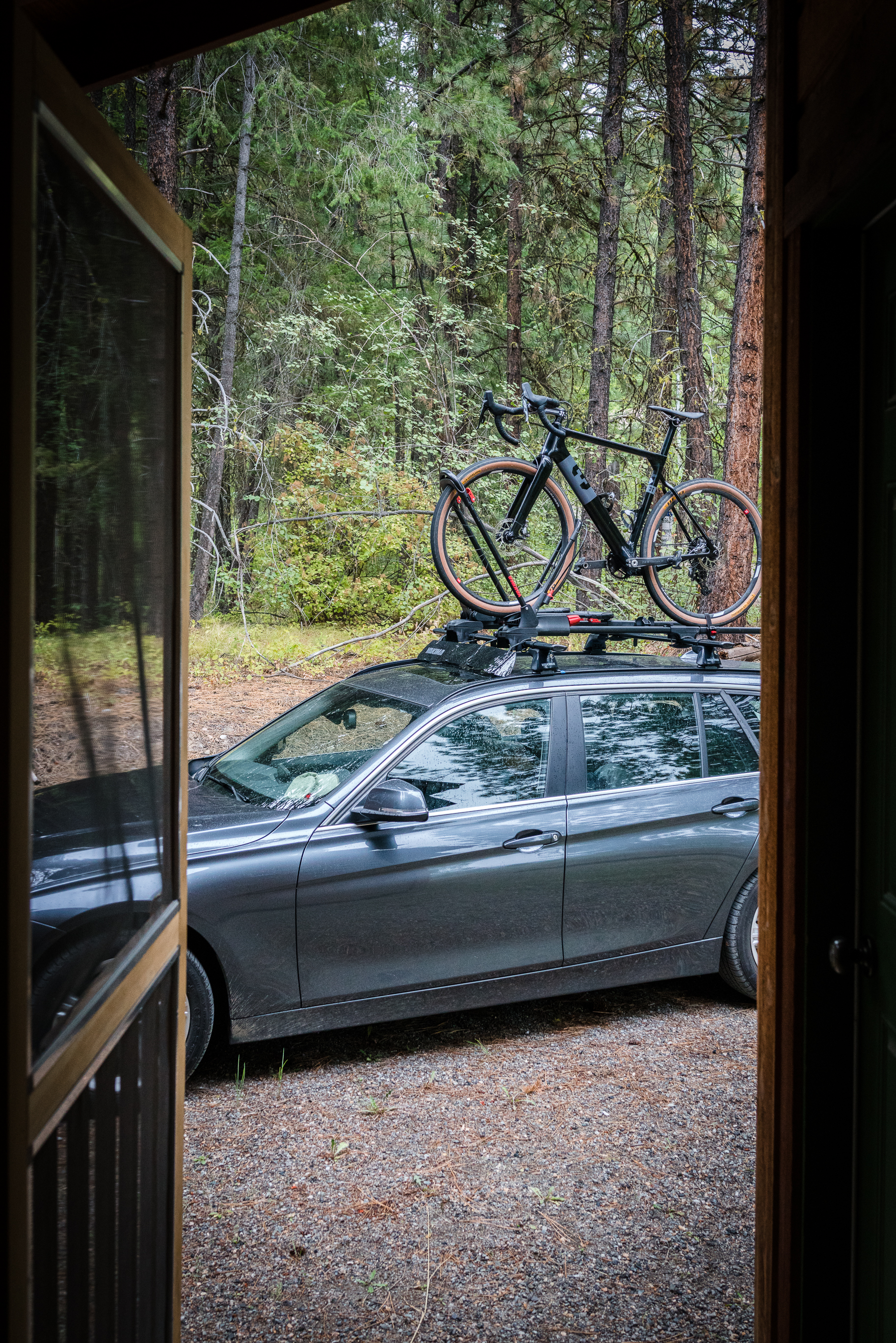 One thing I didn’t understand, is why would you buy a car/SUV/wagon and then attach scaffolding to it, so you can transport bikes. Several reasons for my thinking included: not dooring your bike with it on top of the car or having it fly off in severe wind. Yep, both of those things have happened to me. I drive to rides with a wagon and the bikes are inside. One with the wheels on and two with the front wheels off. My racing buddies use vans and large SUVs for the same reason: to put the bikes inside.

Well, as it happens, since I stopped racing and riding wider, large volume tires instead, I’ve run out of room inside the wagon. A couple bikes, knobby tires, gear, cooler, and it’s cramped, even in a full-size wagon. My needs for more space were well timed for Yakima’s launch of their StreamLine System earlier this year.

The new system offers a streamlined look and installation (a couple hours) and it was developed as a collection to match their bar styles and towers. Of those bar styles, I chose the JetStream that was wind tunnel-designed to reduce noise and drag.  I noticed too that the system is easier to switch out accessories and Yakima seems to have spent much time on the experience of using their racks.

To further quiet the rack, I added a front fairing. I’ve lost about 3 MPG since installing the racks and driving to the Methow and Bend to ride. Not bad at all and those drives were at highway speeds in windy conditions. The racks made some noise, but way less that I expected.

While I’m still not in love with scaffolding on my car to attach bikes, Yakima met my needs for more room with a well designed and made roof rack. If the wagon had a hitch, I’d opt for that instead, but will make due with the racks, and not trade in the wagon for a behemoth like a Suburban…

Aerodynamics, ease of use, compatibility, and attachments aside, where Yakima’s system performs best is securing bikes on the rack. All of my bikes are thru-axle and disc now. Attaching bikes by the front tire, I’ve placed 650b 2.1s on the rack, and 700c with 35s. I wasn’t able to fit a fat bike, but could easily switch out the Frontloader for a thru-axle fork mount, that’s until Yakima releases the FatLoader (I made that name up, it’s not a real product).

The total cost of my setup was about $900.00 and it was a few hours of setup. Yakima’s instructions are quite good, better than Ikea’s. One complaint is their torque wrench supplied with the parts kits gave me no indication of how much torque I was applying and the instructions didn’t explain it either. I placed some tape on the wagon roof rails as a visual aid and noticed the racks slipped a few centimeters after a highway drive. I wrenched the towers down even tighter and they haven’t slipped since. Did they leave a mark on the car’s rails? Probably…but those bikes aren’t gonna fly off, that’s for sure.

I’m still in danger of dooring the bikes. And, Yakima should beef up the cable lock accessory. That seems only a slight deterrent for a thief with cable cutters. Stopping for breaks on our last road trip, I parked so I could watch the bikes and would not leave them unattended for any reason.

Find Yakima’s StreamLine System at a retailer near you or online. The racks opened up more room in the wagon, which I immediately filled with more wheel and tire combos, like the new ENVEs.

Here’s how the racks were ordered: