Like the Digital Sound Projectors post, this one is about the gear and tech I use that isn’t on the bike.

As the publisher of a bike blog and a career blogger, I’ve spent years traveling to take pictures and write about cycling and web technologies. I didn’t consider myself a photographer when I started and I used nothing more than my iPhone and a point-and-shoot. As my love for photography increased, so did my skills, I graduated to a Canon 50D, then to a Nikon D7000. That growth resulted in better photos, but also added weight and complexity to my bag. Sprint a few times between between gates at an airport with bags + a bike and weight becomes a big concern. 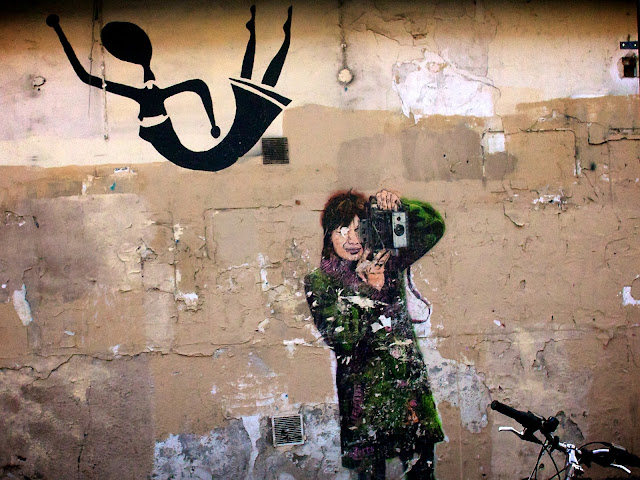 I’m also one of those “perfect pack” people. I travel with a purpose and get rather OCD about what I’m carrying. That’s because I also travel with a folding bike and ride everywhere I go. Depending on the length of the trip, I’ll bring a Macbook Air and/or an iPad with the camera connection kit. I’ve live-blogged product launches and other events by shooting, ingesting, and uploading from the iPad, and it’s worked well but the SLR has always been the biggest weight in my kit.

I want to continue to take and publish better photographs, but also don’t look forward to carrying so much gear. Which is why I’ve started to look at Compact Systems Cameras to help lighten the load. The goal for me is to create the best travel kit that doesn’t compromise on image quality.

On The Road, Again

I traveled to Paris last year to speak at a conference about Social Media. Olympus lent me their newest Micro Four Thirds camera, the E-P3, and three lenses. I read the prerequisite reviews from Kent Rockwell and others so I got myself up-to-speed on the curiously-named format. 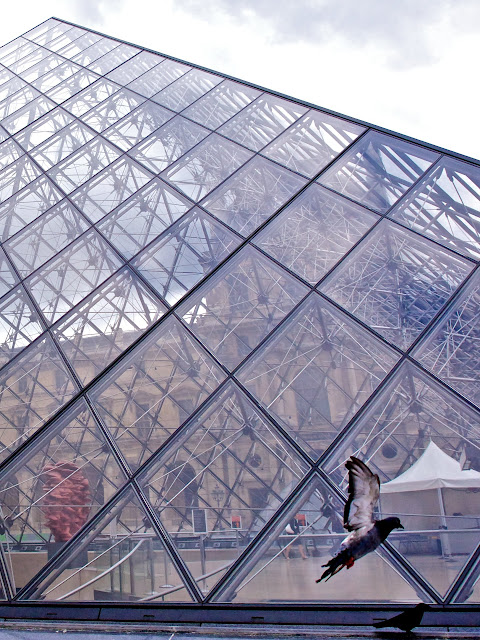 DSLR-quality photos, interchangeable lenses, and a small form factor sounded good. The E-P3 and lenses would fit in the same space taken up by my 1.4 prime lens alone. It’s also better than my iPhone 4 for taking remarkable, in-the-moment photos, right?

Yes it is. By the nature of what I do with blogging and the bike, I’m a street shooter. I’m at ground level, exploring cities, cruising bike paths, and investigating curious nooks around the world. I take photos as I see them. My studio is the street. Something always happens on a ride, always. Like finding myself surrounded by three thousand RollerBladers near Notre Dame cathedral. Take the lens cap off. Then click, pedal, click, click, pedal. Boom! 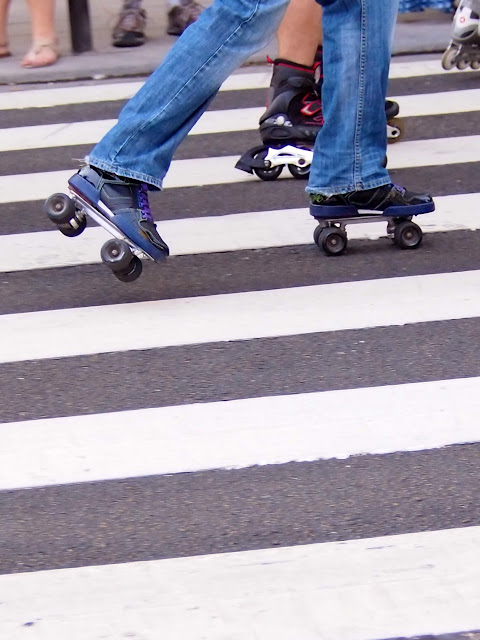 It took a while to get used to shooting with the Live View on the LCD screen instead of a viewfinder. Yes, I put the screen on my face a few times by accident. Olympus sent an electronic viewfinder (EVF), but when compared to the brilliant OLED display on the back of the E-P3, it’s like looking at the lunar landing video instead of looking at a HDTV. 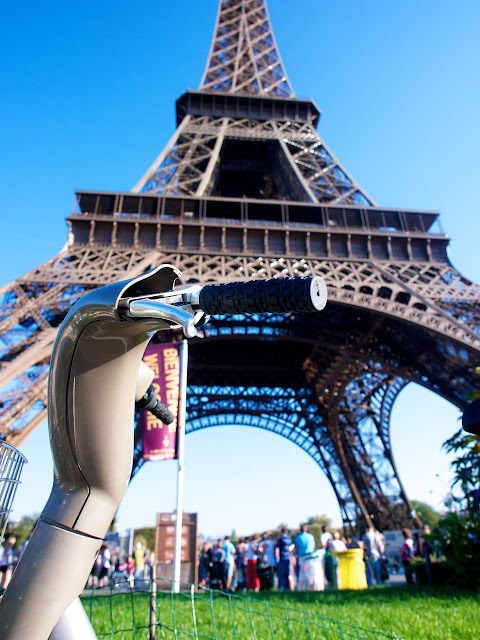 Olympus claims the focus time is fastest in its class and that seems true. Startup time however is slower than an SLR so I just left the camera powered on and would, literally “point and shoot.” I took about a thousand photos and very few were out of focus. Like the iPhone, the camera likes ambient, natural light. It struggled with bright sun and dim candle-lit dinners. The only shots I missed were when the camera wasn’t on and had to start up, then focus. 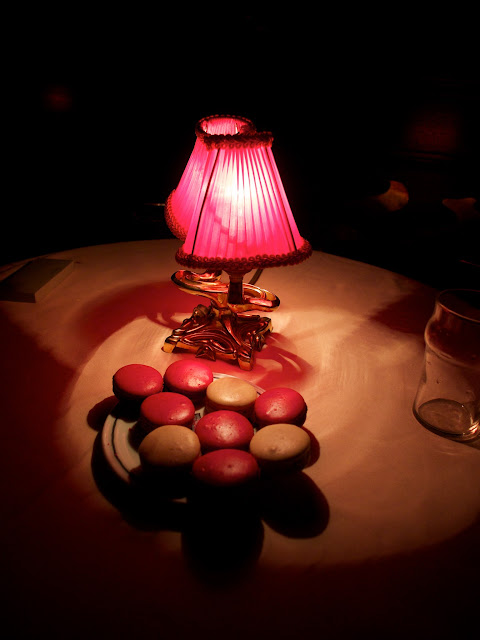 Now that I primarily shoot with DSLRs, I’ve come to rely on a certain simplicity and accessibility of the controls, but most compact cameras inherit the control system of their smaller point-and-shoot siblings. That’s a bit maddening when you’re trying to quickly adjust your camera to keep up with a changing scene.

Button placement is an issue too. I accidentally recorded more three second movies of nothing with the E-P3 than with my SLR, like a blurry little room service ketchup bottle and long looks at my shoes. The red record movie button is right where my thumb hits the camera when I grabbed the camera, it seems.

I weighed the D7000 versus E-P3 and I saved two pounds traveling with an MFT camera instead of the SLR. I also brought four lenses with me instead of one. 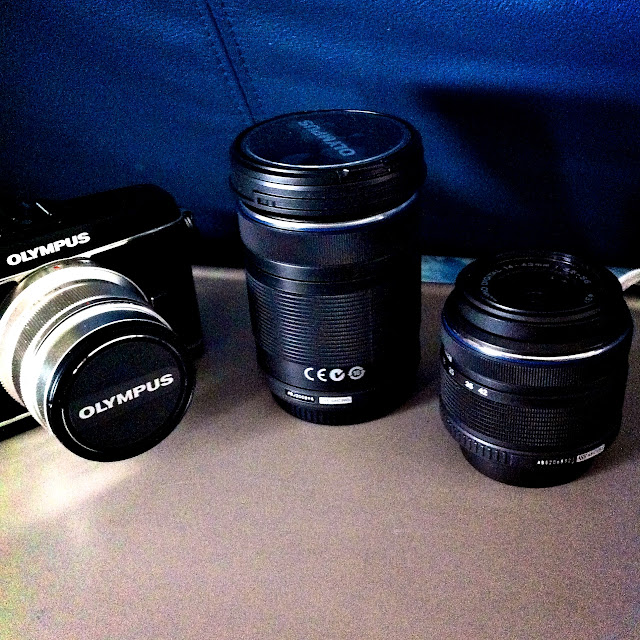 The camera and kit

Bringing only an iPad (something that seemed natural with a small camera system) and not a MacBook Air would have shaved off another pound or so (not even counting the lack of the MacBook power adapter) but I wanted to have the most flexibility with working with RAW images, so I took both systems.

What I really learned was that a small, compact camera is anonymous on the street. I shot tons of candids because the subject either didn’t notice me or care that I was photographing them. When I shoot with the D7000, I often have to ask for permission because the camera gets noticed.

Another interesting phenomenon—subjects react differently to a small camera than they do to the D7000. With a larger SLR people seem to get intimidated and the result is a forced look of concern. There’s something about the small size that is disarming, like they don’t know I’m a blogger. 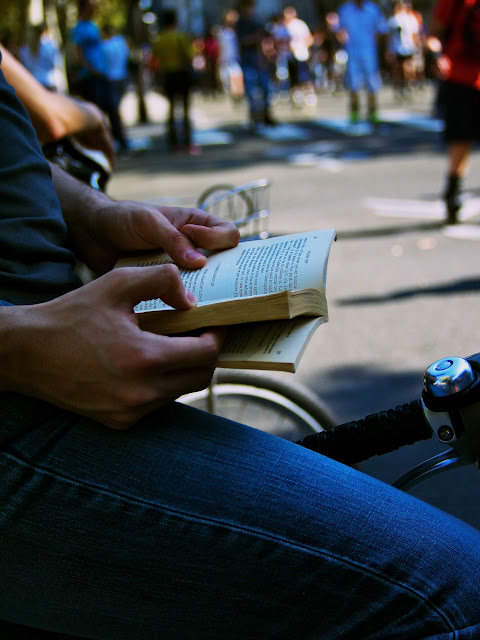 When shooting a group of dogs playing in a fountain, I had to wonder if they would have reacted differently if I were holding a large, imposing camera. Certainly their owner would have noticed. 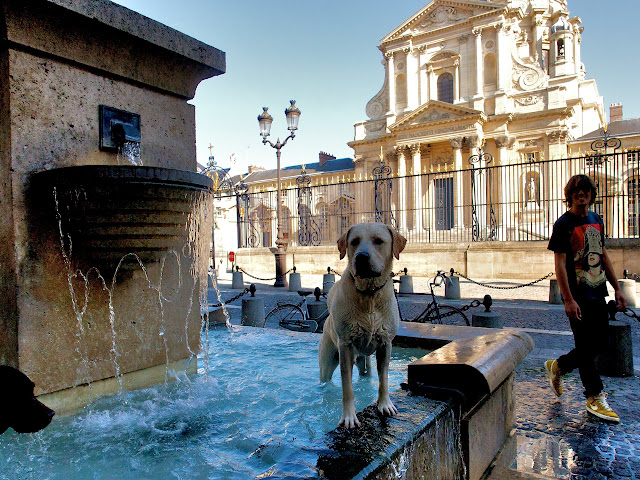 Cameras usually hang off around my neck like a pendulum when I ride my bike and I have to hold them to stop them from swaying when I’m pedaling fast. The E-P3 just dangled there on my chest like a photo-taking medallion on a gold chain. Because it was small, I could take it to dinner and other places where I normally would have left the SLR behind and relied on an iPhone. 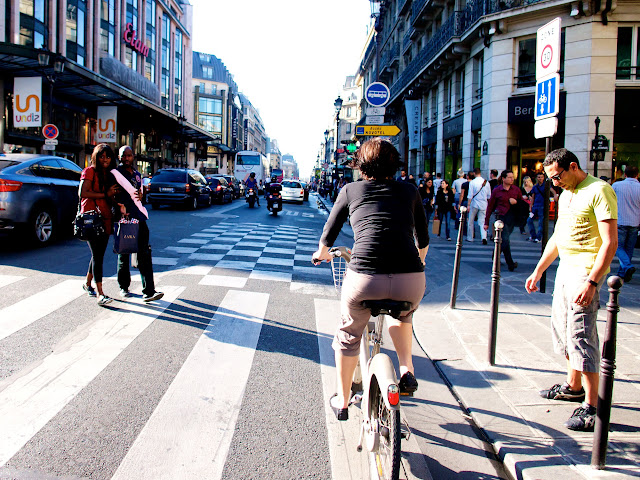 On the bike, on the streets

The E-P3 did cause me some concern when I was packing — compact cameras come with lots of little pieces. I had nothing to put them in and created a pouch in my bag with padded dividers from an old Crumpler backpack. I’d expect to lose various components over time when jet-lagged and fumbling to get out of a hotel room. The battery charger was ridiculously large for travel however, the battery did last for a day of shooting even when I left it on the whole time. [Note: There are a lot of good third-party travel chargers available that are much smaller.]

While I was in Paris, Olympus announced the new 45mm 1.8 Micro lens, which I’d like to take the next time I travel. I’d rather not travel with three little lenses, but one do-it-all prime.

There are some compact cameras with larger sensors—notably the Sony NEX-7 that handle low light and long exposures better. Image quality was there with the MFT sensor, but few photos came “right off the camera” and into a post. Because the sensor is small (relative to a full-frame SLR or even an APS-C sized compact system’s camera) it’s more prone to issues with noise, contrast, and light falloff. As a result, I spent more time tweaking the images than those from the D7000.

The Race is On

Back home I took the E-P3 to a local cyclocross race to see how it would perform. Many bike races feature challenging lighting, fast-paced action and dynamic subjects. The E-P3 was able to keep up with the action focus-wise, but I missed my SLR’s level of control. I found myself fumbling for shots rather than having the camera act as an extension of my eye and capturing shots just slightly too late. [Note: David Schloss shot with the Fuji X100 at an indoor bike race and it took him a long time to get used to the shooting style, but it is possible. With the Olympus system, I should’ve used the EVF during the race, even with the lower resolution. It’s just hard to frame fast-moving sports while holding a camera at arm’s length.]

The Compact Systems Cameras are evolving to a point where they’re the obvious choice for the on-the-go shooter and while they still aren’t as flexible as an SLR camera they’re the perfect second body for the professional. They’re also the perfect primary tool of the photographer looking to travel light and catch the moment.

The best thing though is that CSC cameras like the Olympus E-P3 are still very early in their evolution. As more photographers embrace these cameras they’ll continuing to get better and better. Some day travel-photographers might give up our SLRs altogether, something that’ll make my packing even more perfect.

See the rest of my E-P3 photos on Picasaweb. Also, a post about riding Velibs all over Paris.