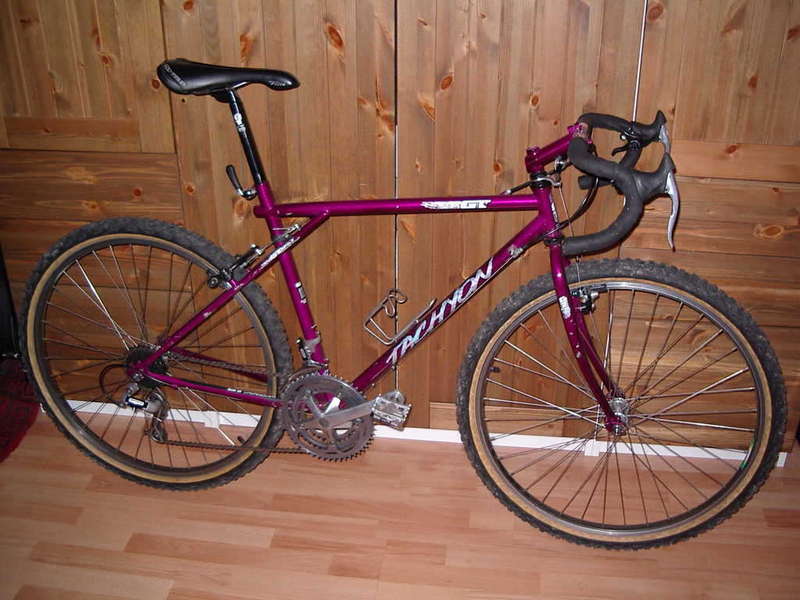 At the end of the 1980s, GT introduced the Tachyon, the flagship of their “Crossover” line of bikes. Their idea was a bike that would give you the best of both road bikes and MTB, and the key would be frames built for a unique tire/rim standard called “700D”. This dropbar bike was designed to take a 2.0” knobby tire on a rim that physically measured 587mm at the bead seat (as opposed to 622mm for 700C or 559mm for 26”) for offroad riding, but it could also take a 1.4” slick tire. With the slick tire, the outer diameter of the Tachyon’s wheel would be about the same as a 700C with a 19mm tire, but of course the Tachyon’s wheel would have a lot more cushion. This concept of having a voluminous tire with the same outer diameter as a racing 700C might sound vaguely familiar, because it is the exact same argument that 650B proponents have used for a half century or more. In fact, 650B’s bead seat diameter is just 3mm smaller than GT’s 700D. Ultimately the Tachyon did not find its niche in the market, and the 700D “standard” has been dead for decades now, but it remains a mystery why GT went out of their way (and the phrase has never been more appropriate) to reinvent that wheel.

In hindsight, the GT Tachyon was really a fascinating bike in its details. The later version had a stem that combined the features of a traditional quill stem and threadless stem, which back then had yet to become established on the market. Similar to some contemporary Tom Ritchey designs, the quill expanded at both ends to secure the steerer and the extension simultaneously. The handlebar clamp used a 2-bolt faceplate, so the angled extension could be flip-flopped to give a low road position for the handlebar or upright for offroad. And the fork had horizontal dropouts to allow the rake/trail to be fine-tuned for offroad riding with big knobby tires. If the Tachyon was a bit gimmicky, GT’s background in BMX probably encouraged unconventional designs, but the bike was not a success. Certainly the weirdo tire standard would have scared off some retailers and potential buyers, but maybe the concept wasn’t quite right for the time. The idea was to bridge the gap between the then-somewhat unfashionable road bike and the increasingly complex MTB, but the market and buying public eventually moved to flatbar bikes with slightly wide 700C tires, dubbed “hybrid” bicycles. MTBs were still in the middle of a boom, and cyclocross bikes were someplace way outside the mainstream.

There were other market experiments at the time. Bianchi had the “Project” series of 700C bikes designed for more technical riding than the decidedly street oriented hybrids, but the tires available at the time were perhaps too skinny to allow those bikes to shine offroad. With wider rubber, those Bianchis could have been the first “29ers” and maybe the whole history of mountain bikes would have been changed. As it was, Bianchi lacked either the foresight or commitment to get a tire manufacturer to make big fat knobby 700C tires, and it would be almost a decade before WTB made a proper 29er tire. Even though a 29er tire is an old standard in the sense that it has a 622mm bead seat diameter like the majority of road bikes, the +2.0” width necessary for performance offroad was essentially the same thing as a new standard. What would it be like today if Bianchi had broken into the market with a true 29er frame and tire before 26” MTB design had become thoroughly entrenched with 26”-specific suspension and wheel systems by the late 90s? The 1993 Project 7 in fact did have a 700C version of the Rock Shox Mag21 suspension fork, so with almost all the pieces seemingly available it’s curious that the 29er trend didn’t start earlier.

Now consider GT’s wager on creating a new category with frame designs specific to a totally unique tire/rim standard. They could have at least saved themselves some trouble by just choosing 650B, considering that the GT’s 700D rims are barely any different. It would be a lot less solid argument, but one might hypothesize that 650B knobby could have ended up being the alternate offroad tire standard instead of 29er. That 650B x 2.0” tire size is large enough to share some of the 29er’s advantages without requiring gross changes to 26”-based frame geometry and componentry, and a big 650B would have almost exactly the same outer diameter as a hybrid’s 700C x 35mm, perhaps allowing 650B to compete in that market segment too. It’s an interesting idea, but it’s doubtful that 650B could have saved the GT Tachyon, much less revolutionized the MTB market of 1992. Those geometry issues for 29er would have been less of an obstacle in the early 1990s as suspension forks were barely in the 50mm range for XC and full-suspension was strictly for downhill bikes. It’s now that even XC bikes have over 100-120mm of rear suspension travel that 650B has some attractive benefits over the larger 29er wheel. My next project bike will likely involve big 650B tires. Or to be more precise, it will use 650B x 2.25” and 700C x 32mm with disc brakes. If a tire defines a bicycle’s abilities more than any other component, then I’ll be able to completely change the character of the bike within 30 sec, by swapping out the wheels.

UPDATE (2012.11.28): Ultimately, I had to set this idea aside, but I had the idea of using a PressFit BB30 eccentric BB allow me to adjust the BB height. At this stage, I am more likely to pursue a 29er MTB so I can do some honest-to-go offroad racing.