Busy week and two press releases—TIME and SRAM (both allcaped)—arrive in our inboxes about the same time, that started an messaging exchange between Mark and I over who’d cover what.

Mark V: Did you get a press release from SRAM about direct mount S900 rim brake calipers?

Me: That’s about as exciting as bike camping/packing but def post.

Mark V: DM brakes from SRAM are interesting since I figure they’ll be a forgotten footnote when everything goes disc.

ME: TIME just launched a new bike, I got a preview of it while in Park City…it’s awesome

Several hours go by and SRAM’s Direct Mount Rim brakes are all over the bike media news; apparently, that story does have traction v. a $16K French bike.

Me: apparently people care about direct mount brakes, it’s all over the bike media.

Mark V: I for one think a superlight bike from Time is less relevant than direct mount brakes from SRAM, because Time is no longer a player. That SRAM is making direct mount brakes means that big brands such as Trek and Canyon are not ditching rim brakes as fast as bike journalists have suggested. It means that SRAM concluded that DM rim brakes needed to be addressed in order for SRAM to be competitive in the OEM market. That means more than French boutique bikes, which don’t mean shit to the mass market and haven’t for a decade. 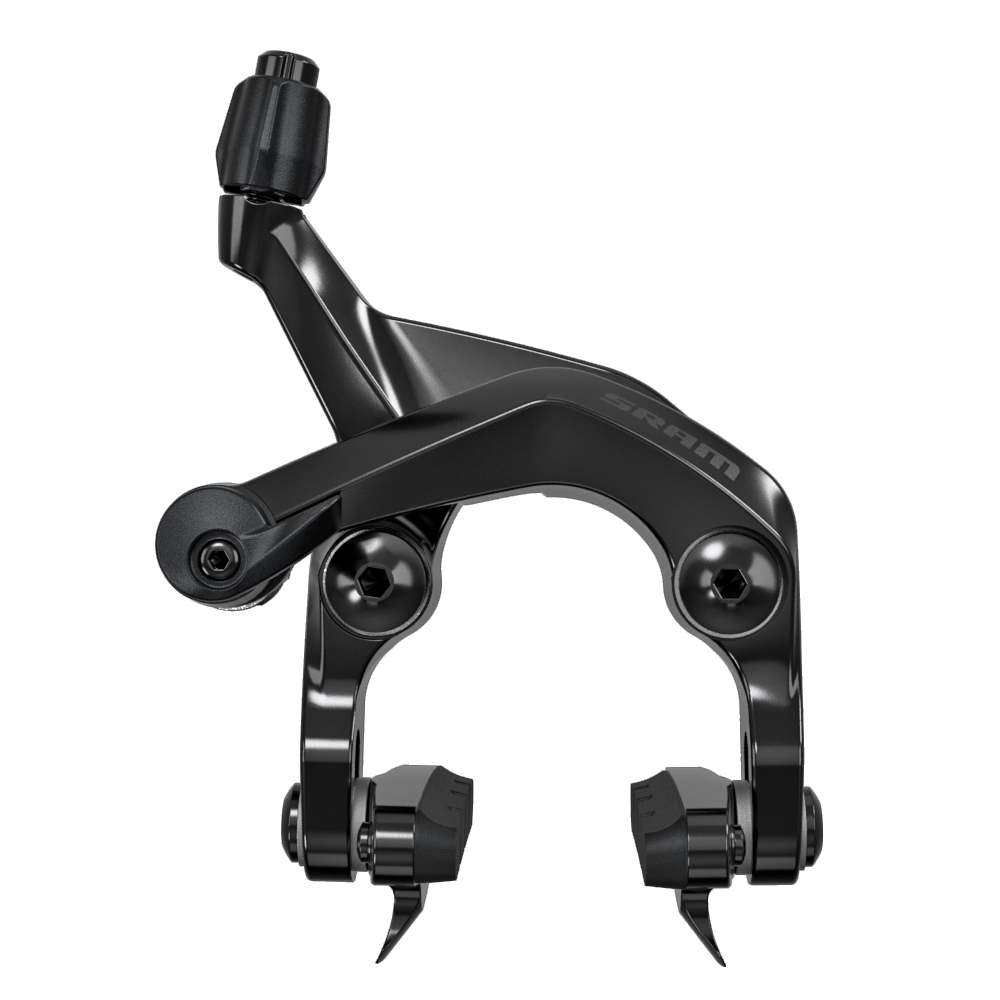 And, that’s a perfect lede, while somewhat buried, to SRAM’s brake news. The new design is something of a departure from the SRAM Red group’s AeroLink cammed single-pivot caliper design. The new DM caliper has dual pivots that are bolted directly into the seatstay or fork crown of framesets using the DM standard. The two pivots are symmetrically situated rather than offset like conventional dual-pivot brakes such as the SRAM’s Force rim brake. Direct mount brakes are much stiffer because the splay force is dissipated into the frame/fork rather than flexing the caliper upon a single central mounting bolt.

As a result, this is a rim brake with superior modulation and great power, no sponginess, and a snappy return. The bikes I’ve ridden with direct mounts braked well, sure. That was another French bike, incidentally. By virtue of relying upon the bike frame or fork to support the pivots rather than metal arch, direct mount brakes also allow framesets to offer a bit more tyre clearance than could be had with conventional short-reach racing calipers, usually 28mm or perhaps even 30mm.

Mark V: By now you should understand that DM rim calipers are not an aftermarket upgrade that you could use to replace your existing conventional brakes. These new brakes from SRAM exist to compete against similar offerings from Shimano and Campagnolo on new bike being made with the DM standard. The fact that SRAM decided that they needed a DM brake means that they and frame manufacturers expect to be selling rim brake road bikes in significant numbers in the future….or at the very least, in the mid- to high-end of the road market where DM brakes are more likely to be incorporated.

Read Mark’s explainer about the DA 9000 brakes here when they were first leaked/spotted in 2013.

SRAM’s direct mounts will ship in March and are being ridden by Team KATUSHA ALPECIN.

And, with a company like Rosignol behind TIME, I wouldn’t count them out; at all.