Motor doping is back in the news this week, after a brief lull in headlines, and this time because of an accusation Phil Gaimon makes in his 3rd book, which has received very positive reviews.

Draft Animals: Living the Pro Cycling Dream (Once in a While) has been out since October of this year and people are either slow readers and just getting to the incriminating passage or it’s not number one with a bullet on the holiday reader best seller lists. 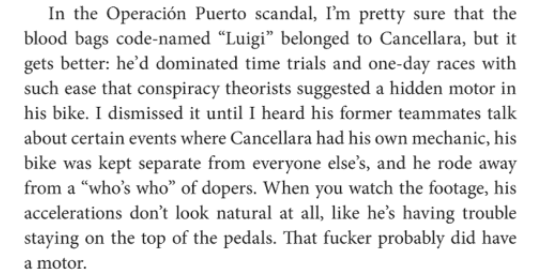 Either way, I haven’t read it, and not that engaged in racing anymore, but when he tweeted upset that people were just reading that one doping part, we had this exchange on Twitter.

in context that part was actually dismissing the whole motordoping thing, but that is what I think happened, so I had to say. Serves me right. Just not what I'd like the book boiled down to.

So what’s going on is a “nothing new to see here” claim about Cancellara and eyeballs. Phil is a gadfly of an ex pro making a living riding a bike for fun and gets tons of eyeballs. Now that the book is getting more eyeball tonnage, it’s best to work the topic, and work it he does while also discussing his teammate Danielson’s doping.

In case you missed it, the conspiracy theories about motor doping started with Cancellara and suspicious behavior on his bike at a classic.

We’ve covered the topic since then and what’s important about the story is less the prevalence of motors in bikes, but that doping following the Omertà narratives that were initially dismissed as outlandishly false.

Not to say that there isn’t a little spectator value in the UCI’s new president Lappartient investigating claims of motor doping dating back to 2010.

Well, as it turns out, motors do exists in bikes, and I’ve seen them firsthand. The problem isn’t the cheating so much, but the suffering hero narrative sold to fans of the sport for a century. We’re supposed to believe those that race bicycles do so out of a some higher calling and with moral fortitude.

Despite what we’re sold, it’s not glamorous, but a blue collar sport more like another one driven by motors, NASCAR. The working hard aspect is what Phil’s book is supposed to be about. And, racing is rubbing, sure, and we shouldn’t be surprised by any new devious method to cheat.

What is surprising is that fans still believe that athletes don’t cheat and honestly the fact that Gaimon called out Spartacus so blatantly.