Go Slow Faster is 3T’s mantra for their award-winning Exploro gravel frameset, and the Italian brand’s Aeronova Team Stealth carbon handlebar turns out to be a fine compliment to the bike. While designed for long breakaways and sprint-triathlon, the Aeronova proved to be surprisingly comfortable and ergonomic for gravel riding.

With stunningly innovative handlebar designs for triathlon/TT and track racing, there could be little doubt that 3T would eventually market an aerodynamic road handlebar, but making a dropbar that reduces air drag without sacrificing ergonomics or stiffness is no easy task. The Aeronova is 3T’s entry into a product category that traditionally is full of curiosities but lean on mass appeal. Over the past four decades there have generally been just one or two basic shapes that were popular at any given time. Typically today road bikes are fitted with what is called a “compact drop” handlebar with a drop dimension of 127-135mm, reach 70-80mm, relatively flat ramps, 0-4 degrees of flare, and a hook beneath the lever that creates a smooth, non-segmented bend.

Perhaps borrowing some inspiration from their unique Sphinx track racing bar, 3T made the Aeronova longer in reach. Compared to 3T’s Ergonova handlebar, the Aeronova is stretched out by almost 30mm to 104mm, but instead of forward sweeping the flattened tops, the Aeronova’s tops extend perpendicularly from the stem. The increased reach comes almost entirely from the long ramps (the fore-aft bar sections behind the levers). This is a boon on long rides because the rider can move their grip aft and alternate their position over the bike to relieve fatigue, while still keeping a wide stance on the bars for control. To keep those long ramps from getting in the way of forearms while grasping the drops, the Aeronova flares outward 6 degrees at the shoulders.

Alongside the stem, the bar keeps a round 31.8mm section far enough outward to allow clip-on aerobars, likely as an appeal to triathletes. Then the bar goes immediately into slippery, 3:1 aspect ratio, bladed sections that slope down as they extend outward, before rapidly curving up to meet the generous ramps. This creates a bit of a ledge that a rider can rest their forearms against while stretching into the so-called “sphinx-position” frequently employed by breakaway specialists on the road and points-race on the track.

The Aeronova is internally routed for the levers through a triangluar window where the ramp meets the bladed top and exists a discreet port underneath and near the stem. I chose to leave the tops mostly untaped for aesthetics as much as aerodynamics, and anyways I don’t spend that much time with my hands gripping the tops. I did make sure to run the tape the full length of the ramps, which required a little overlap on the tops. The feel of the ramps is not unlike that of vintage randonneur bars such as the Nitto Randonneur, the rounded aft section of the ramps nestling into the palm of your hand. I might even go so far as to describe the Aeronova’s shape as the result of using a wind tunnel to blend together a Nitto Randonneur and a compact bend dropbar.

Thankfully, the curve of the Aeronova’s drops is not quite as abrupt as 3T’s Ergonova, which is so tight that mechanics sometimes have problems getting certain lever designs to clamp onto the front of the bend. The Aeronova better accommodates variations in lever design and mounting angle. The more gentle curve also puts the hook closer to the lever, a boon for riders with smaller hands. Still, the Aeronova’s bend is a bit sharper than the virtually faultless Deda Zero100, so the 3T perhaps makes a better match with levers that have adjustable reach (e.g. all current SRAM and Shimano) than those that don’t (e.g. all Campagnolo, older Shimano).

The Aeronova bar is offered in levels: the premium LTD, Team, and the aluminium Pro. The LTD and Team are both carbon, presumedly using the same moulds but with different carbon composition and layup. In this review Bike Hugger had the $350, 220gr Team version with the all-black “Stealth” logos. I have actually tested the other aero road bar in the 3T catalogue, the Aerotundo; however, the Aerotundo I rode was of the LTD construction. Admittedly, the two bars are not the exact same shape, but they do share similarities like the bladed top section. So I can kind of infer that I think that the LTD makes for a legit lightweight bar but ends up much too flexible for my tastes. On the other hand, the Team Aeronova struck a fine balance between smooth and stout. I actually used the Aeronova on the Exploro in the last races of the cyclocross season, and though I could feel the flex while torquing the bar on short technical climbs, it was far from being a liability. On the sometimes long descents of gravel riding, the Aeronova provides just a little welcome suppleness without sacrificing control.

The long ramps of the Aeronova do get a bit in the way while in the drops, depending on your sprint style. If you’re the type to really work the bike side to side, sprinting on the drops while out of the saddle, your forearms will tend to bang into those long ramps. The Aeronova’s shape, having a little less reach and a little more flare, is better in this respect than the Aerotundo, and I have found that if I’m a little more conscious of my positioning while sprinting then the issue is largely forgotten. Still, this handlebar would not be my first choice for criterium racing due to the shape. Larger riders may also find that even the Team construction may not provide the ultimate stiffness  for sprint melees, though I would willingly trade that out for the Aeronova’s forgiveness on long, rutted roads. To be fair, I have yet to see an “aero” road bar by any manufacturer that was remarkably stiff. Zipp had a bar called the Vuka Sprint which was laughably flexible in actual sprints. 3T makes a track sprint bar that IS stiff, but it weighs a ponderous 368gr for the 35cm size, and I’m pretty sure I could beat a man to death with one.

Due to the significantly longer reach dimension, I strongly recommend that riders choose a shorter stem than normal with the Aeronova to keep the riders’ reach to the control levers constant. Many bike fitters fail to consider bar reach when fitting clients, which would almost be excusable given how ubiquitous the “compact bend” road bar has become. But the Aeronova’s reach is definitely an outlier. I ride 100-110mm stems on bars with 75mm of reach; for the Aeronova I sized down to an 80mm stem to put the levers the same distance from the saddle.

One other reason I chose the long reach Aeronova is that I wanted to run a short stem that would better accommodate a handlebar bag. For gravel rides I use a small rando bag that attaches to the bar via the well-regarded KlickFix system. The KlickFix mount grasps the Aeronova exactly where the clip-on aerobars would otherwise go. By using a shorter stem, the bag’s weight is moved closer to the steering access for better handling.

Potential buyers should also know a little about how 3T measures bar width compared to the rest of the market (note: see recent updates in the next paragraph). Like they do with all their bars, 3T measures the Aeronova center-to-center at the bar ends. Be aware that the Aeronova’s 6-degree flare makes the bar distinctly narrower at the shoulders. Much to the chagrin of Bike Hugger’s chief, Byron, there is no universal sizing convention for dropbars. The 40cm width Aeronova review sample measures about 38cm c-c at the shoulders, which is very similar to an FSA Energy Compact. However, ENVE Compact Road bars also have flare but are instead measured center-to-center at the shoulders. So a 40cm ENVE Compact Road bar is more comparable to a 42cm width in either FSA or 3T. Just to mix it up, Deda Elementi measures their bars outside-outside and have zero flare, so the 40cm Aeronova is like a 40cm Zero100 at the hoods but closer to a 42cm Zero100 at the bottom. For me, I had previously used a 40cm (c-c), zero-flare bar for CX racing and a bar that was 36.5cm at the shoulders and 39cm the bottom (both c-c) for grave riding. The 40cm-size Aeronova has proven a capable compromise between the two, but admittedly I prefer narrow handlebars in general. My road bikes use 35.5cm (c-c) bars, and I have a nearly archaic 56cm flat bar on my MTB. Many riders and product managers have chosen to equip bikes with bars that are wider and perhaps flared as much as 12 degrees. It’s personal tastes, but I’m a smaller rider and I like narrow.

UPDATE 2019.01.02 : I have recently discovered that 3T has changed their sizing method for their handlebar lines. 3T nominal bar size is now based on the width at the hoods rather than at the ends. In regards to the Aeronova, the actual shape and dimensions of the three sizes are unchanged, but the sizes are now given as 38, 40, and 42cm. So the “40cm” size tested in this review is now designated as “38cm”.

What we at Bike Hugger did not do was run comprehensive tests in wind tunnels to determine how fast the Aeronova is. Whatever aero advantage it has, I’m sure that it is not going to be the dominate factor in my gravel riding, and in fact it will be rendered irrelevant when the handlebar bag is fitted. But reduction of aerodynamic cross section is a proven method of reducing drag. As long as the bar is not an impediment to fit or comfort, then arguably the Aeronova’s aerodynamics should help in certain conditions. As it is, the bar has surprisingly met or exceeded all my other expectations for gravel, as well performing admirably for cyclocross. I would not recommend this bar if you are currently using less than 90m of stem with a typical compact road bar, because you might not have room to shorten up the stem to compensate for the Aeronova’s longer reach. Like any dropbar that both is lightweight and has thin aero sections, the 3T is not rock stiff. This is a bar that was designed for powering away on long breaks on the road, and I’ve found that the road doesn’t have to be paved for the Aeronova to be outstanding. 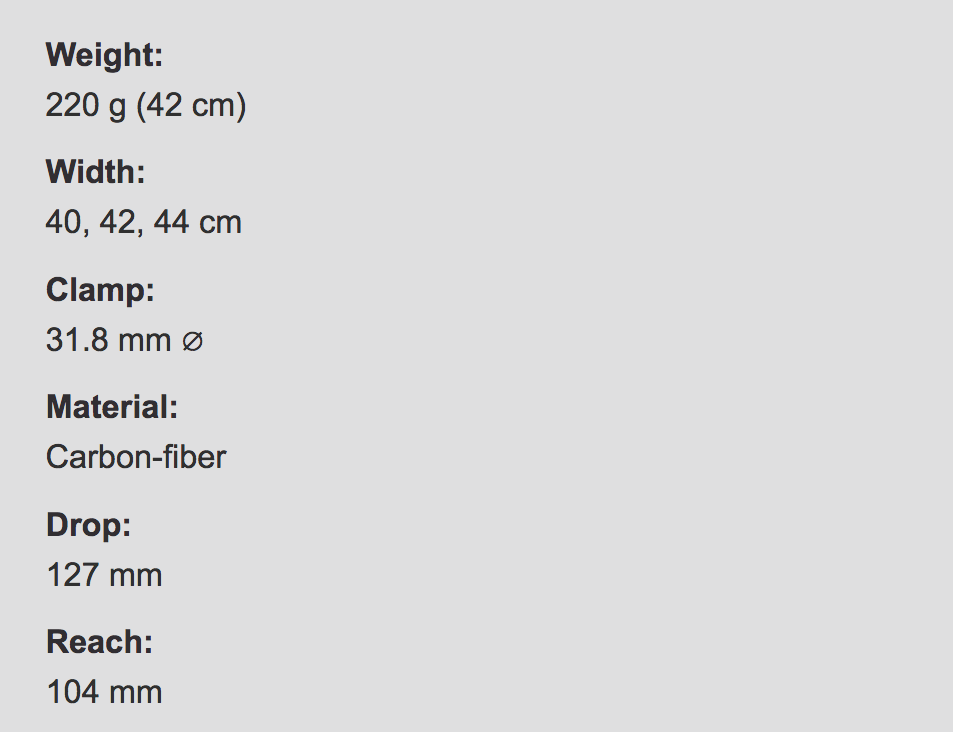 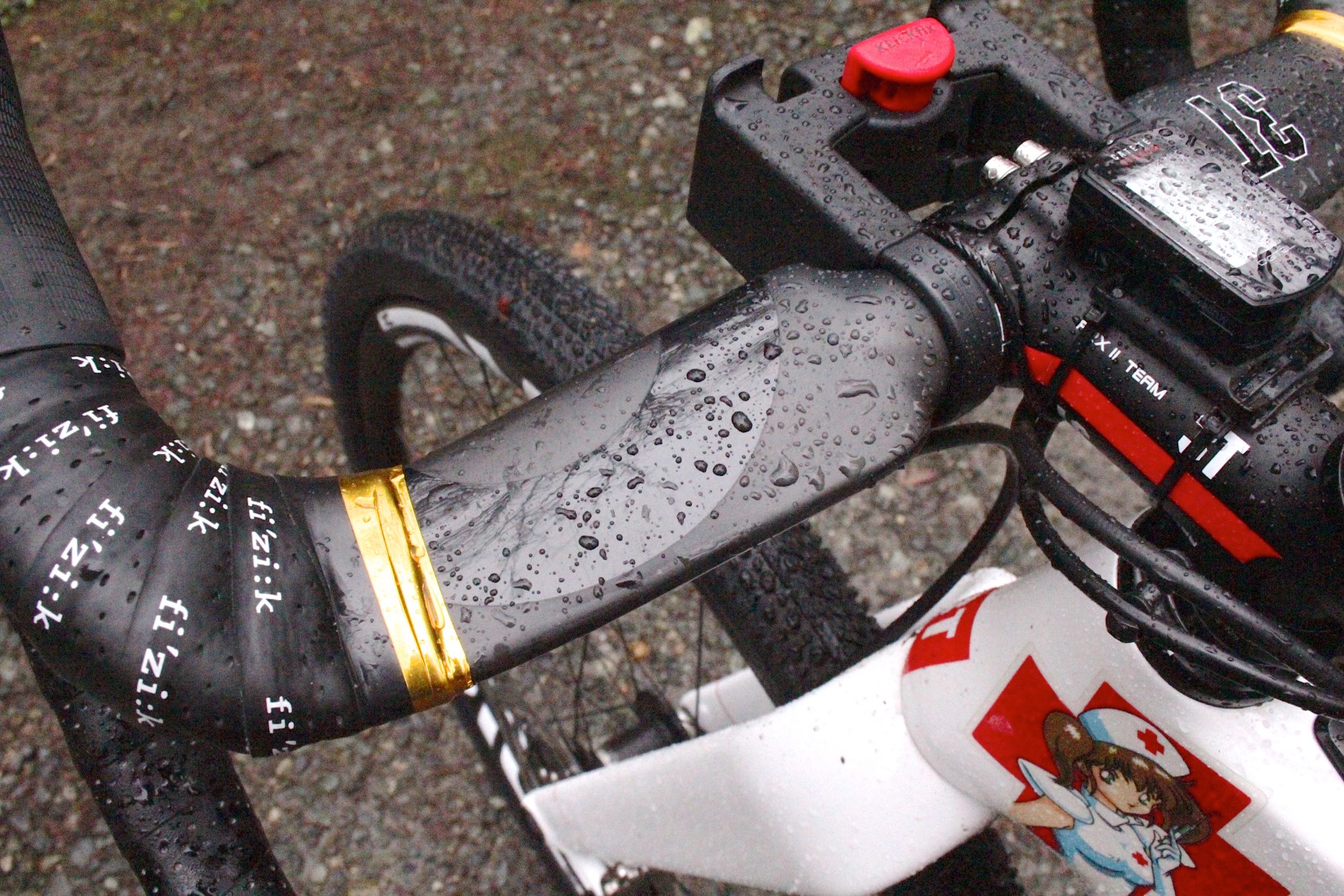