If by chance you become the sole survivor following the collapse of the human race, due to a global pandemic, a not-so-limited nuclear exchange, or a new Scott Baio reality show, you won’t need a bell for your bicycle. You won’t need a bell because as you ride through the desolate wastelands desperately scavenging the rubble for food tins and penicillin there will be no one to whom you want to signal your approach. And the last thing you want to do with only a handful of 9mm bullets left is to attract the attention of ravenous Chachi zombies searching for brains. Keep this firmly in mind when you consider putting a bell on your bicycle’s handlebar. It’s nonsensical to have a bell unless it is to signal to the people around you, so get one that grabs people’s attention. If you can do your part to delay the apocalypse, let Bike Hugger help you choose a bell that will serve you well. We looked at four, well-made bells from Spurcycle, Crane, and Knog.

In the minds of many, bicycle bells are a cycling-related commodity similar to inner tubes that you might grab at the strip mall department store while looking for padlocks and braided wire cables, perhaps near the toy aisle. Even among cyclists who have become sufficiently sophisticated such that they can condescend to accept the existence of Huffy as a foil to their own Pinarello, there are those who think a bicycle bell should cost no more than a box of cereal…or perhaps should be found as a prize at the bottom of one. Yet this is an age where you can spend $50 on a CNC-ed alloy bracket to simultaneously hang a $500 GPS unit and $200 headlight in front of $90 leather handlebar tape. I’m not trying to glorify conspicuous consumption, but I will point out that all those fancy things just mentioned do nothing to break the trance of pedestrians held rapt by smartphones, wandering the bike lanes like blind moles who found themselves bewildered above ground. Relative to handlebar accoutrements that do nothing in such situations, a good quality bell yields tangible benefits from a meager investment. 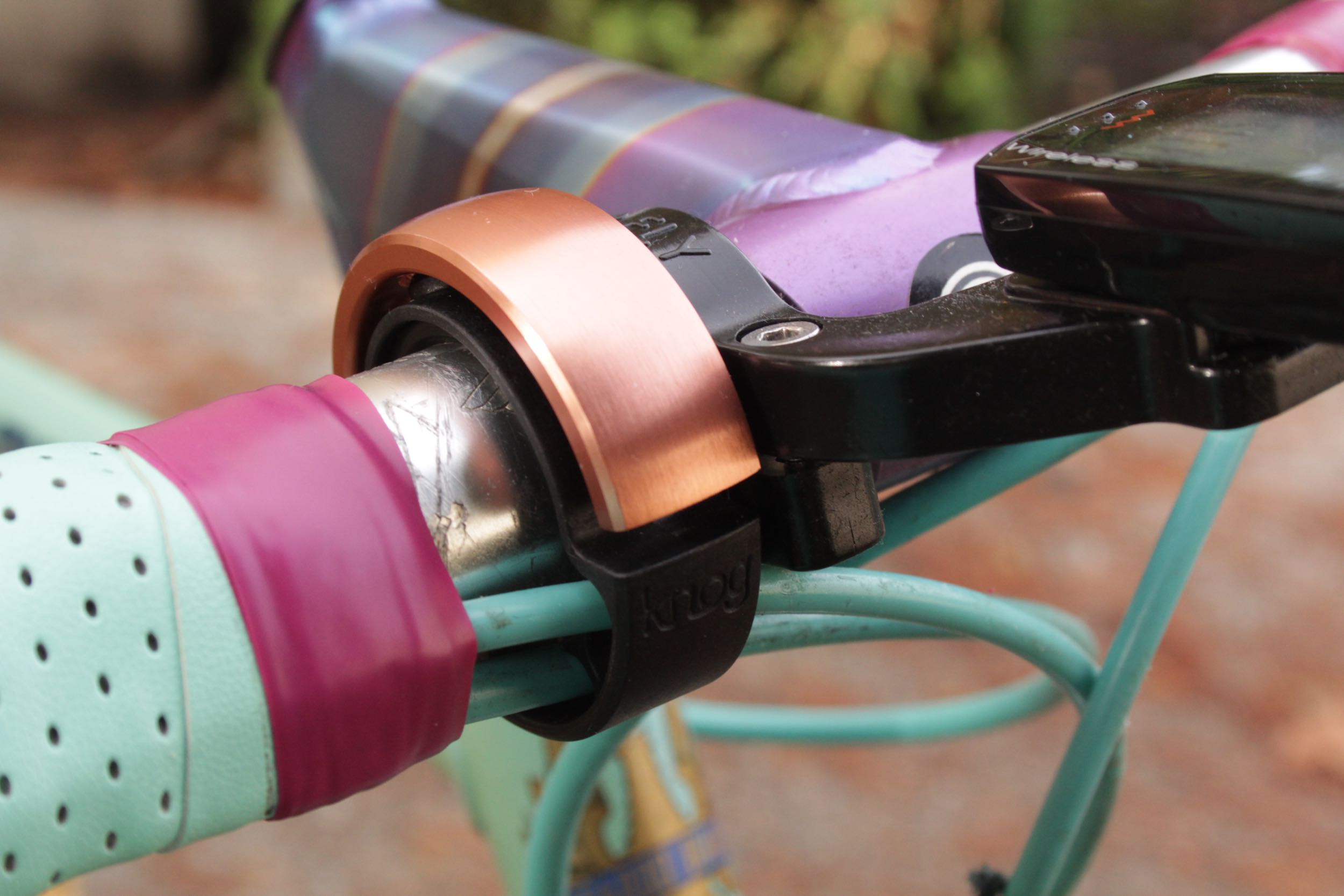 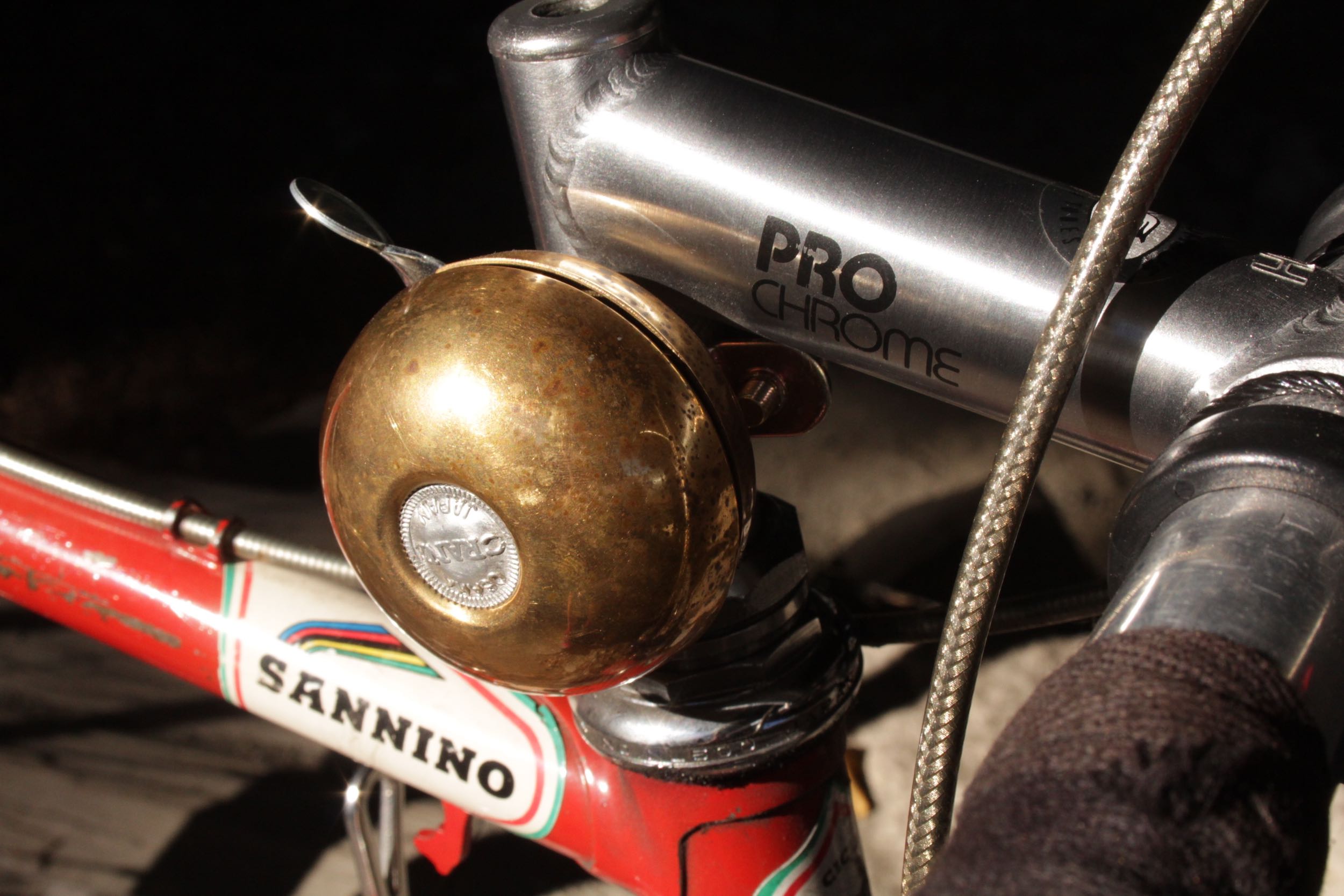 If you’re a traditionalist, then you might not make it past the first bell on the list, the Riten made by stalwart Crane Bell Co of Japan. It’s large brass dome with stamped steel fittings is a time capsule for mid-20th century manufacturing processes, and its rotary striker yields a delightful multiple note voice that is instantly and universally associated with the joy of cycling. On the other hand, you have to be a traditionalist to use this bell, as the Riten’s clamp is restricted to a range of 22.0 to 26.0mm, ruling out current OS handlebars. Its 57mm diameter dominates a lot of handlebar real estate, and the angle of the Riten’s trigger limits the possible useable orientations.

I mounted the Riten on my vintage Sannino, on the quill of the stem to leave room for the handlebar’s bag mount. At 118gr, the Riten is a right chunk of metal, but that hardly matters when mounted to the battered Italian bicycle. What is important is the glorious soundtrack the Riten brings to the whole experience….the supple ride of traditional steel floating on voluminous tyres and a warm, sun-drenched day in the summer. If you like your cycling experience infused with sonic nostalgia, the Crane Riten is the vinyl 45 of bicycle bells at US$23-29.

It is inevitable that the next two, more modern bells on the list are compared, closely resembling one another as they do. Spurcycle’s bell seems to have narrowly predated Crane’s E-Ne model, if that matters to you. The Spurcycle bell is made in California of high quality materials, and maybe it means something to you that Spurcycle chose to keep the manufacturing and design at home rather than simply sourcing it out to the cheapest factory overseas. And if it doesn’t matter to you, then you can still be amazed at how loud and audibly piercing the minuscule, 30mm diameter device is. The high-pitched note stands out amidst the ambient street noise, cutting through to automobile interiors and ears shrouded by headphones. I wouldn’t characterize it as musical in the manner of the Riten, but the Spurcycle is certainly effective at announcing its presence. The Spurcycle is priced at $49 in a “raw” brushed finish and $59 for the black DLC (diamond-like coating). The thin, hard DLC finish isn’t paint, which would diminish the bell’s sustain. 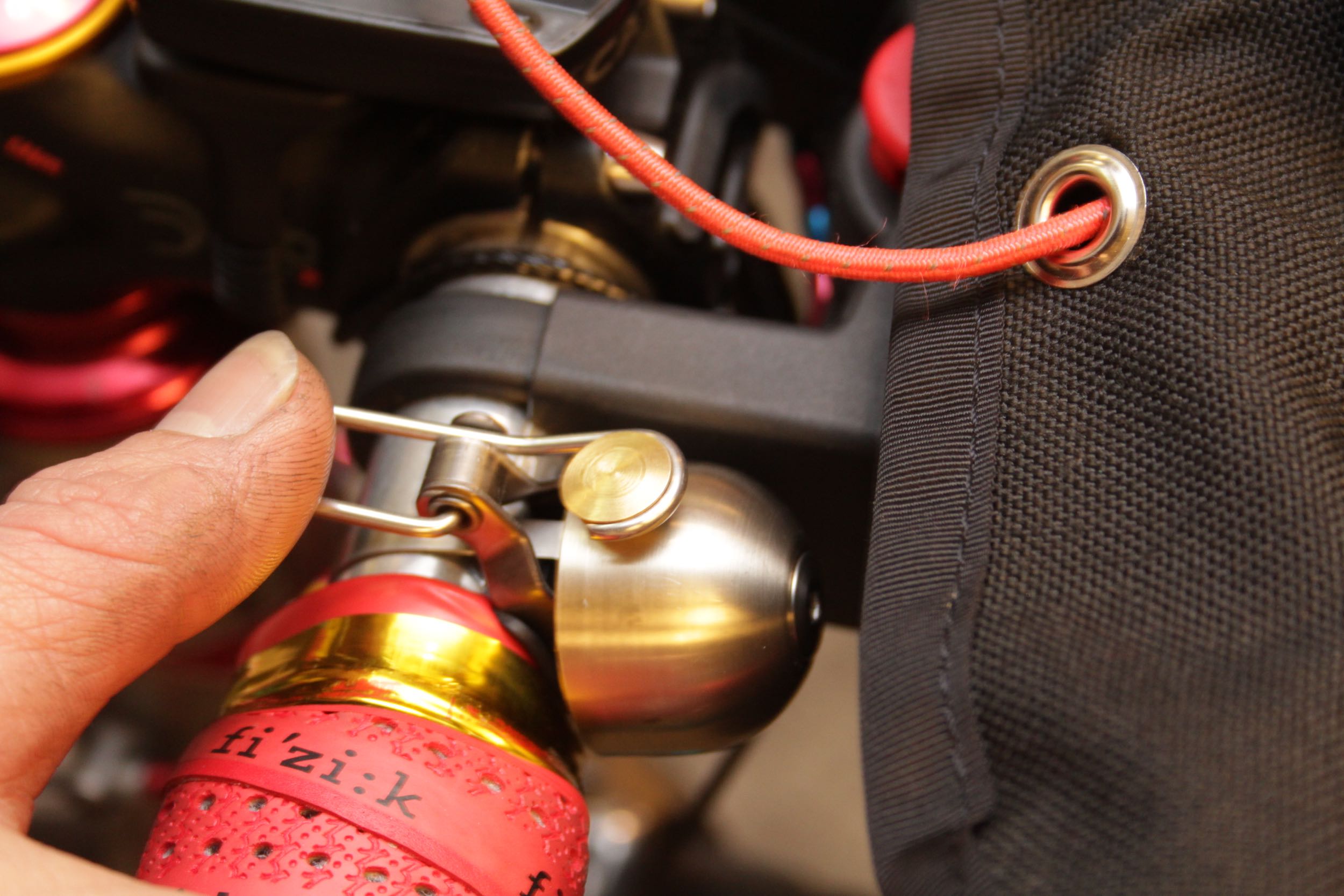 Photos above and below: Spurcycle 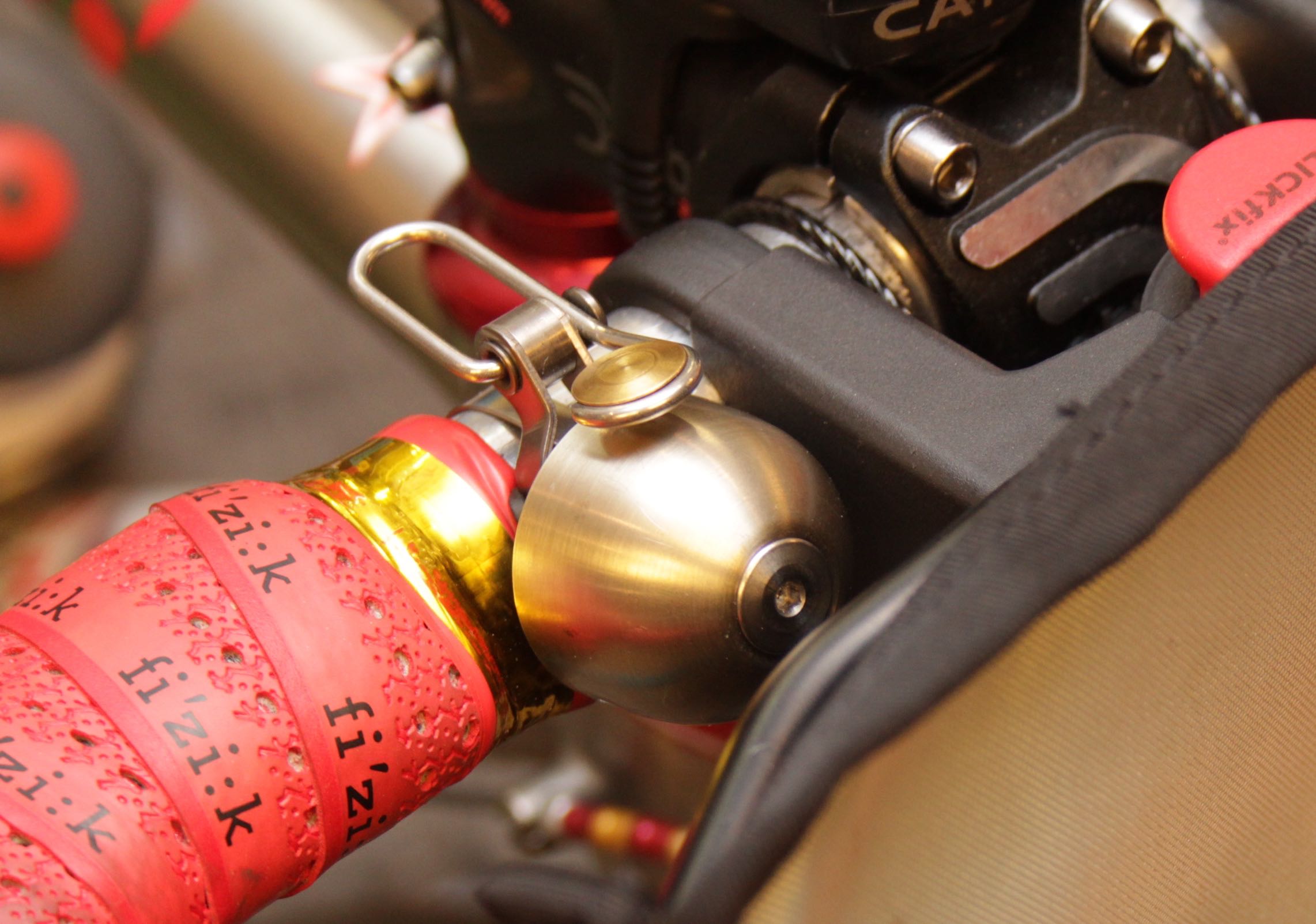 Crane’s E-ne hit the market close on the heels of Spurcycle, and the clamp mechanism so closely resembles the American product that any rational person would have to assume that Crane copied the design. In fairness, Crane does make a quality item that has proven to be durable, and they don’t make their own item so similar that a consumer might think they had purchased a Spurcycle bell under a different brand label. 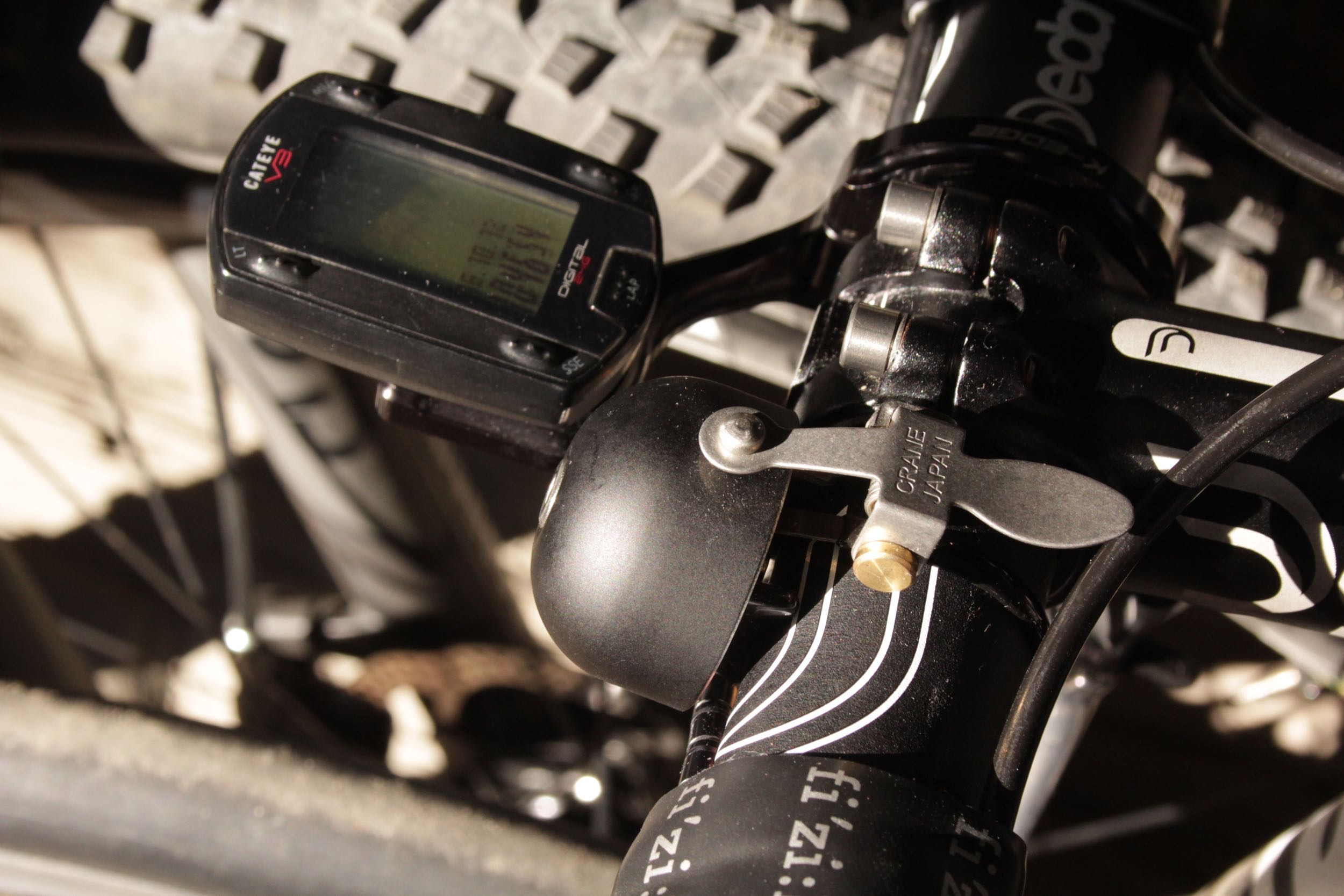 Photos above and below: Crane E-ne bell 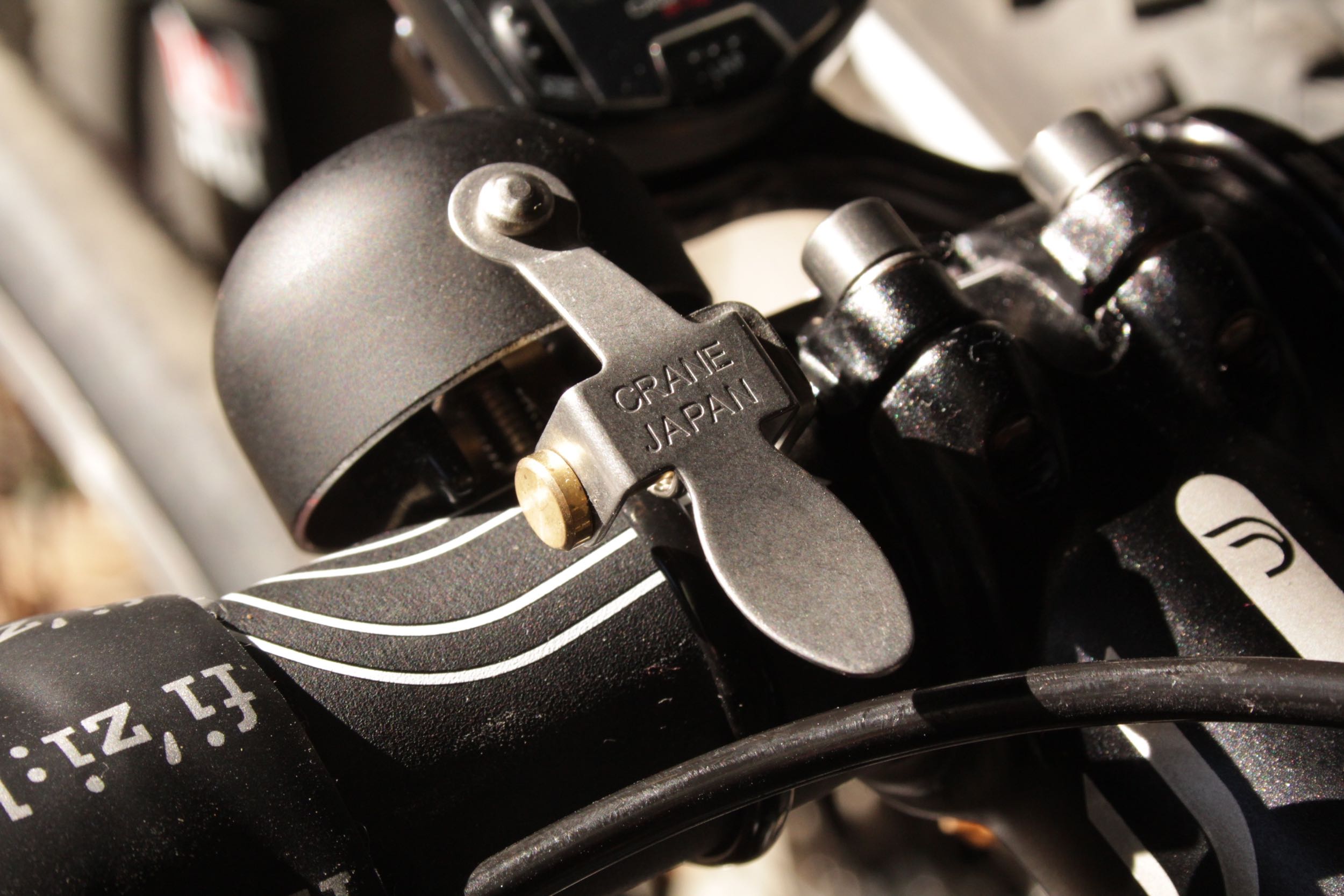 To be sure, there are blatant copies of the Spurcycle on Amazon and eBay that sell for a fraction of the authentic item’s price, but they don’t hold up well and their sound is completely inferior to either the Spurcycle and E-ne. I fully realize that many people out there cannot be convinced that quality materials and manufacturing would a) add to retail cost and b) make a difference in performance. To these people, I’m sure all of the bells on this list are a complete ripoff. But there are people who knowingly buy knock-off carbon fibre handlebars and forks on eBay from cowboy counterfeiters, basking in the self-satisfaction that they are beating the system. That’s f***ing stupid for reasons I shouldn’t have to enumerate.

But back to bells…

In a head to head comparison, the Spurcycle is louder but higher pitched than the E-ne, and the Crane’s sustain is noticeably shorter. The Crane’s stamped metal striker doesn’t quite feel as robust as the Spurcycle, though in two years of use it hasn’t distorted or failed. One curious characteristic of these two bells is that when you try to rapidly ring the bells, there is a ringing speed beyond which the sustain masks individual strikes. In other words, you can ring the bells as fast as your digits can move the strikers, but at a certain point it just sounds the same, the individual tones blending together. This threshold comes sooner for the Spurcycle because the sustain is better.

As previously mentioned, the E-ne clamp closely resembles the Spurcycle, but instead uses one size band to fit the full range of handlebar diameters, instead of a large and small band like the American-made bell. This is probably facilitated by the E-ne’d larger size, as the band has more range of adjustment as it pulls up into the E-ne’s deeper 37mm dome. This is convenient when you consider that one might choose to move a bell from an oversize handlebar to a traditional bar (like I did with my Spurcycle bell) after a year and find that the size small band had long since disappeared (mine had). However, Spurcycle sells spare parts for their bells directly from their website, and for just $2 I got a new small band within a few days.

The E-ne is available in brass, copper, and matte black finishes for $25-30. Curiously, the E-ne weighs less than the Spurcycle (39gr vs 44gr).

Starting with miniature LED lights, Aussie-based company Knog made a big impression on the cycling scene through clever design and innovative use of materials, and fittingly their Oi bell is like nothing else out there. I mean, at first glance you wouldn’t even think it was a bell. The Oi consists of a moulded plastic handlebar clamp that suspends a strip of metal that curves a little more than halfway around the clamps perimeter, and you ring the bell with a single-action plastic striker just big enough for the tip of your thumb. Rather than a bell dome fixed with a band or clamp, the Oi is basically a 15mm-wide, single-note xylophone that wraps around your bar. It’s a deeper note than either the E-Ne or Spurcycle, but neither its volume nor sustain seriously challenge the other bells in this test. Make no mistake though, the Oi is more than a novelty item. It’s a real bell, and although the initial test was limited to just a couple weeks, its smart construction seems likely to give a long service life. One clever feature is the window in the plastic clamp that allows a smooth passage for brake and shift cable housing, although I had trouble fitting the Oi to one of my bikes that had housing along both the front and back of the bar. 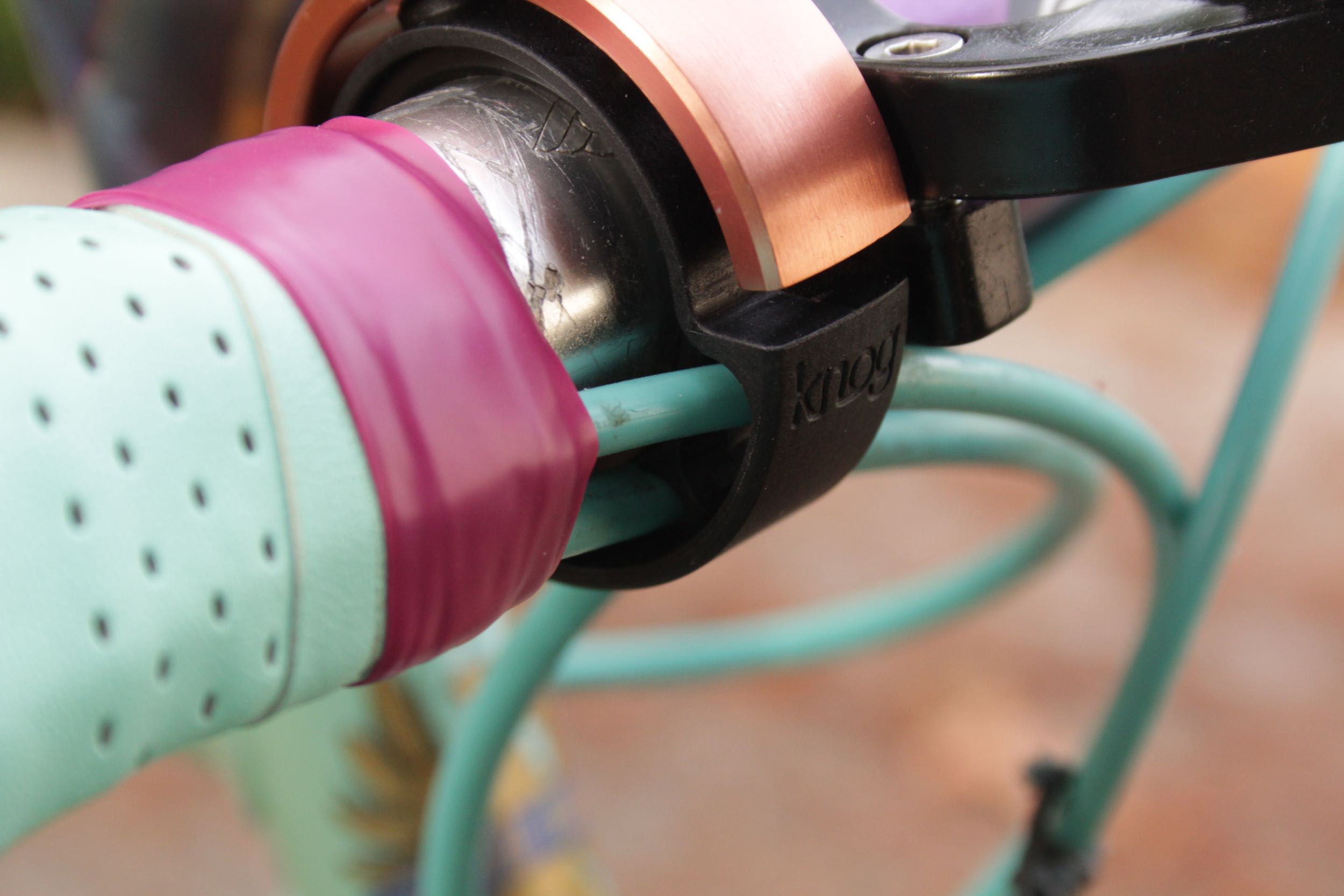 Photos above and below: Knog Oi 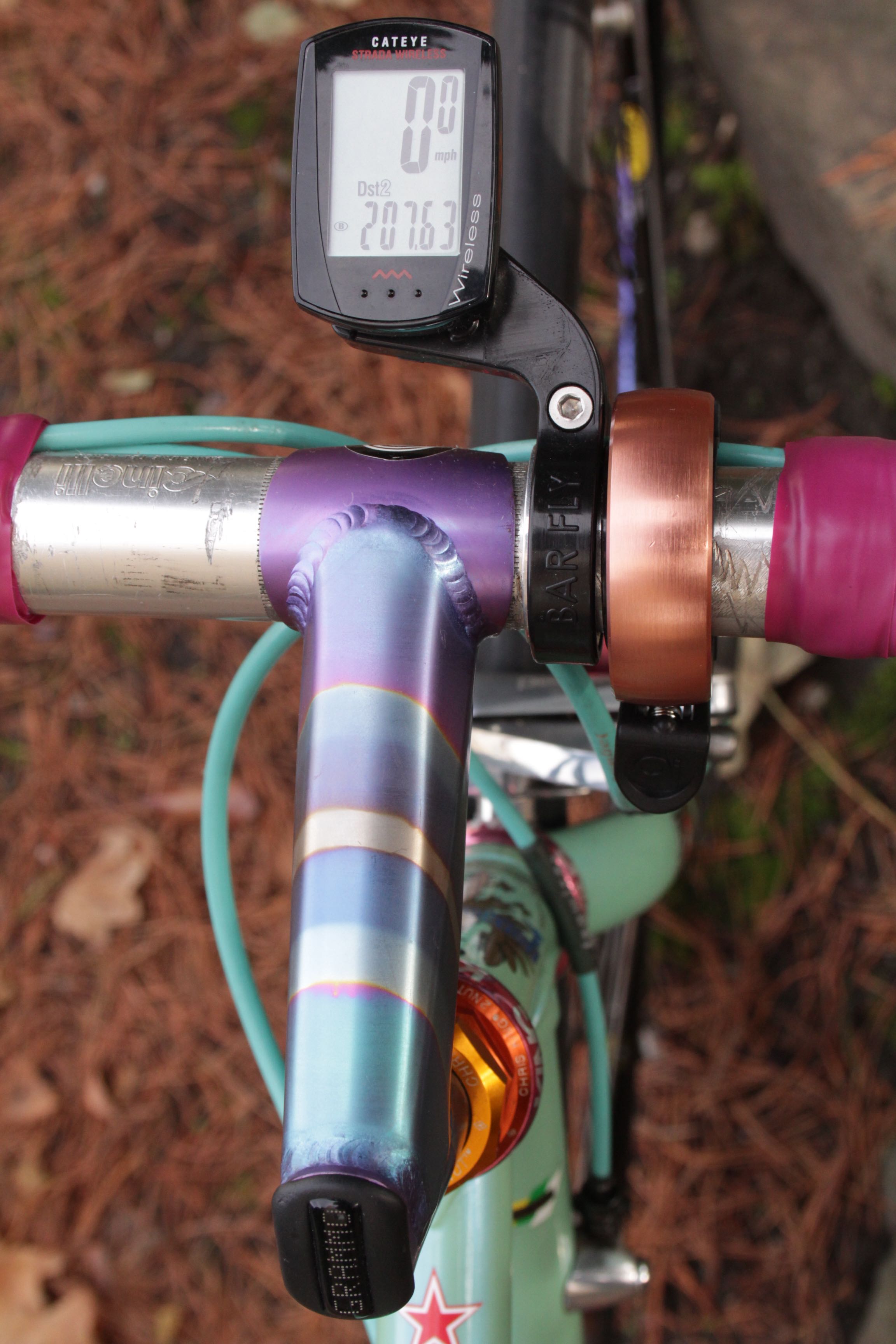 If you are looking for a lightweight, non-traditional bell, the 26gr Knog Oi stands alone. The Oi comes in two clamp sizes; one is 22.2 for the thin section of flat, riser, and cruiser handlebars. The larger model fits 23.8 to 31.8mm with the aid of a shim, to fit the thin section of road bars as well as the stem clamp area of both classic and modern road & mtb bars. Note that the Oi needs to clamp to a round section, while the the E-ne and Spurcycle are a bit more versatile when fitted to more oval bar sections. Attractively priced at $25 retail, the Oi comes in brass, copper, or silver finish.

Get the Bells on Amazon

The Spurcycle is available direct for $49.00.