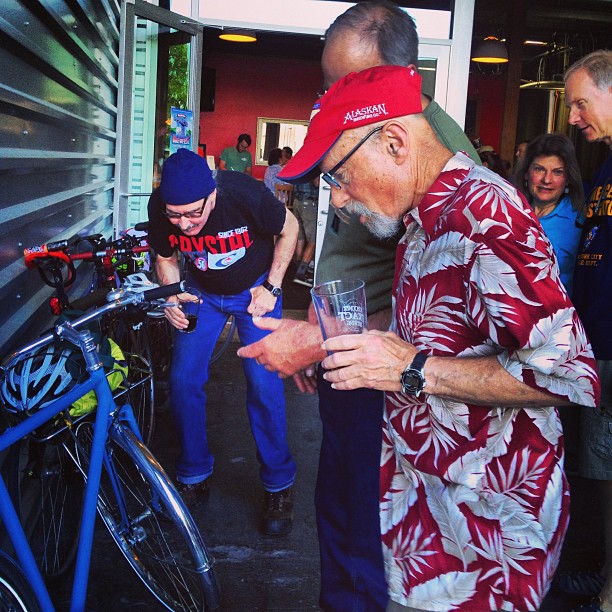 Rode the Shinola Runwell to Schooner Exact (a Seattle Microbrewery) this Summer and it attracted some attention. At first glance, fellow cyclists wanted to know where it was made, of what, and by whom. It has an Alfine 11 speed? Yep and from Detroit. The backstory to Shinola, as it was told to me by their President Jacques Panis, during Interbike goes like this…

Our company said, “you got to do at least some market testing.” So we assembled a group and showed them two pens. One made in China and the other in the States. The made in the USA one cause 50 cents more. The study group said, “nice that it’s made here, but for the money, would save the money and buy the one made in China.” Shinola then presented them the same pens and explained the more expensive one was made in Detroit. “Go Detroit!,” they replied. “We’d buy that one.”

And that’s what Shinola is about: Detroit. As a city bike, sure it rides well, has a wide gear range for the flats and hills, nice paint and the details you’d expect from a Sky Yeager spec (oddly only one bottle cage mount). It also carries a premium price compared to imported bikes. You’re into Detroit and bikes assembled in a former Willy’s Jeep factory? Then this is the bike for you, it’s not about the premium price, it’s identifying with an American brand and what it represents. You can find Shinolas at a shop near you and online. Watch the Shinola pitch at Interbike on YouTube.