A Rant About Women’s Bikes 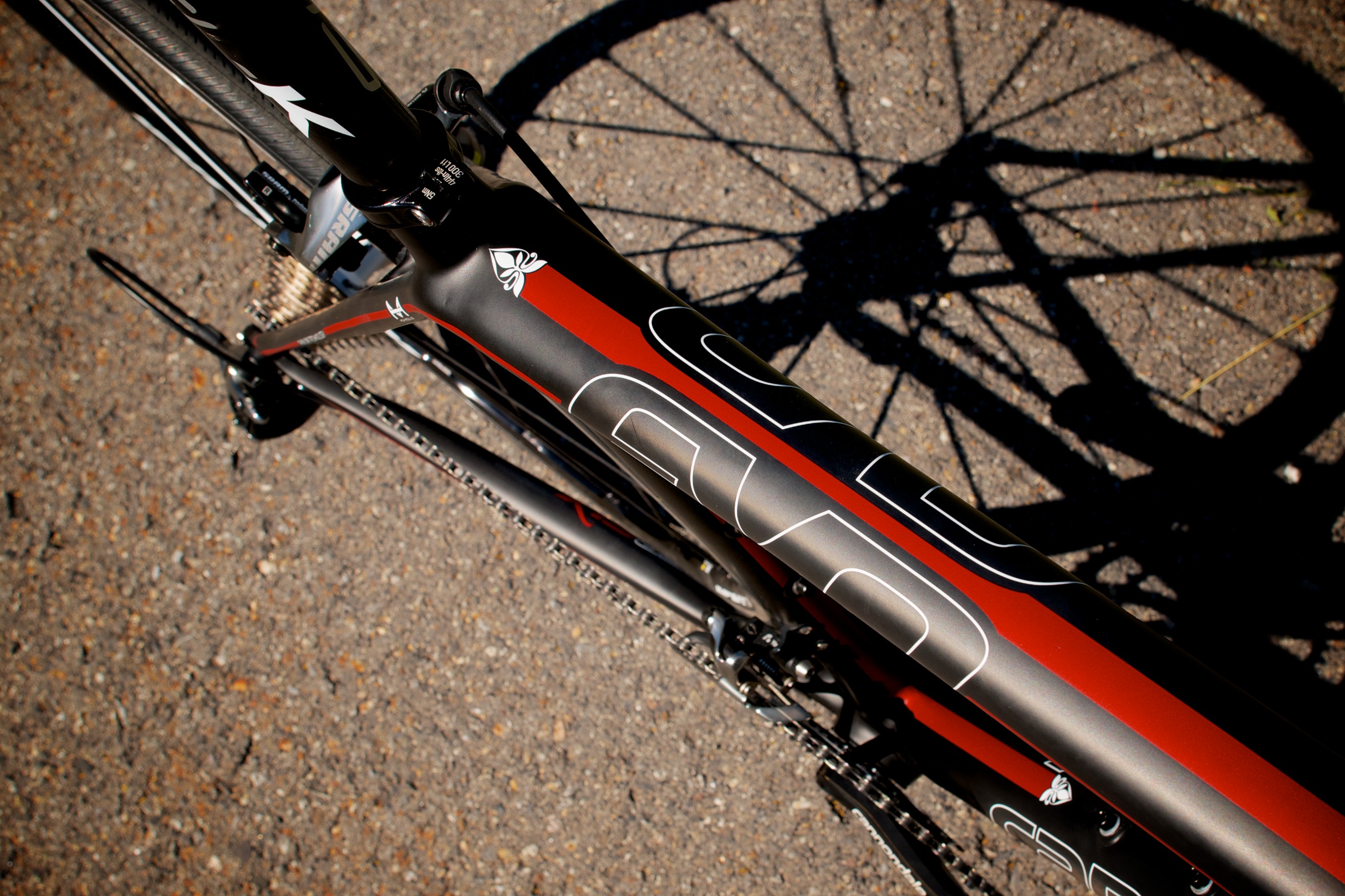 I have always been a bicycle nerd. During most of my bike riding I’ve had nearly a dozen bikes in my stable, ranging from lowly beach cruisers to mountain bikes to custom road bikes. As aluminum replaced steel I made the switch from the ferrous ride to the non-ferrous.

See more photos of the Evo in this post.

As titanium rose to the top of the material podium I purchased a Litespeed Classic, which accompanied me all over the world (even before I had Bilenky Cycle Works add S+S couplings). My Litespeed has ridden around the lakes of northern Italy and the lavender fields of Provence.

But when carbon fiber bikes started to trickle down from the Tour to the weekend club ride, I started to search for the “perfect” bike. This was an era when the best carbon in the world came out of plants in the United States (and Asian carbon was referred to as “cheap”) but most bicycle companies were still just tinkering with carbon. Trek was a pioneer of carbon, having introduced a full carbon bike in 1992 and Giant was backing T-Mobile with their TCR Composite but even stalwart manufacturers like Cannondale and Specialized (who are now known for their carbon engineering) were producing mostly aluminum frames at the high-end price point.

In 2004 I had the fortune of riding all day in Sonoma, California with longtime friend in the bike industry Scot Nicol (aka Chuck Ibis). Scot, a veteran racer, was taking the time to crush me on a beautiful climb outside of Healdsburg and I told him of my quest for a new bicycle. I was celebrating a bit of a milestone in 2005 and wanted something super-special. And I wanted something carbon.

Scot, who knows absolutely everyone in the bicycle business suggested I check out Craig Calfee and his company Calfee Design. Calfee was the builder that created the bikes that Greg LeMond under the original company name CarbonFrames but those bikes were rebranded for LeMond and so not as many people know the name Calfee as they might otherwise.

The Calfee Dragonfly ended up being the perfect bike for me. Custom spec’d tubes, hand woven lugs and super-light. I spent seven years on that bike, constantly upgrading from one parts group to another and shaving gram after gram from the bike. At its lightest (without making compromises for weight over comfort) the bike weighed 12 lbs 4 ounces.

While I loved my Calfee, after seven years I was ready to make a change, feeling that I’d gotten great use out of the bike, but I wanted to see where technology had come. After all, most other high end bikes in 2005 were aluminum or titanium and now they were almost all carbon.

Once again I started to do research into bikes, checking out every bike on the market. My research kept pointing me to one bike, the 2013 Cannondale SuperSix EVO.

The EVO had only been available to journalists but it was already gaining praise. The German bike magazine Tour had called the 2013 EVO “the best bike in the world.” In the medium frame size the EVO comes in well under 800 grams, so that would give me a hell of a platform to go all weight-weenie. And the stiffness numbers make the EVO one of the best on the market. Byron rode EVOs at PressCamp at SRAM’s 22 Hydro Launch (see Issue 01).

My Calfee while “custom” was still the stock geometry for Calfee’s Dragonfly, which put the top tube 1-2 centimeters too long for my body. To be fair, I was younger when I bought the Dragonfly and more flexible and so it was only a touch large on me, but a few years after I got the Dragonfly I went for a proper and intensive fitting and found out that I should have gone for a shorter reach.

The only problem is that the Cannondale EVO isn’t any different than most other race-designed bikes. While top tube numbers look similar in both the men’s and women’s EVO frames, the “reach” is different.

If you’re not familiar with reach as a sizing tool, it’s the measurement of the distance from a line drawn vertically from the bottom bracket to the middle of the headtube. (A great resource on this is on Cervelo’s website) The reach on the men’s 52cm men’s frame is 38.4cm (longer than my Dragonfly) and on the 50 it’s 37.6. On the woman’s frame the reach is 37.2.

And as light as the Dragonfly is (about 950 grams for the frame) the EVO comes in more than 200 grams lower. That’s a great platform for a weight weenie like myself. Before I go any further, I have to say that the Dragonfly has been a stunning bike to own. It’s a dream bike. It’s hand made by craftsmen in the U.S., and Craig is one of the nicest people in the bike industry. If I didn’t already own a Dragonfly, I’d go out and buy a Dragonfly. But I wanted to try something different.

My local bike shop had a Cannondale dealer demo day and I rode my Calfee Dragonfly down and took out the 51 women’s frame. I found myself sprinting up hills, racing myself to the top of a climb. Of course I was partially reacting to the newness of the bike, but I was also hammering on the SRAM Red 2012 group (instead of the 2010 on my Dragonfly) and feeling the power under each stroke.

You wouldn’t think that .4 of a centimeter would be a big deal, but in test rides the difference produced a completely different feeling bike. When I finished off with the women’s EVO I jumped on the 52cm men’s frame and suddenly the bike felt gangly and twitchy. A few days later I took out a 50cm from the shop and it felt equally awkward, albeit better.

The shame here is that I’d have loved to to buy the incredibly expensive Cannondale EVO SuperSIX Evo Black Inc., the incredibly pricy bike that’s a touch lighter than the standard EVO frame but they don’t make the model in a “women’s” frame. Which brings me (longwindedly) to one of the things that bothers me about the bike industry—the marketing of bikes for men and for women. While women generally have longer legs and a shorter torso than a man, there’s no such thing as a standard person. I know riders with long torsos and short legs, long torsos and long legs and so on. It doesn’t really have a bearing on their genitals.

Of course, at least Cannondale recognizes that different sized humans need different frames, this goes the other way as well. Santa Cruz recently spun off a line of mountain bikes called Juliana, that are “the original women’s mountain bike” and Bicycle Retailer and Industry News reported “Frame geometries have not been altered from corresponding Santa Cruz models, but the bikes have different model names and a separate color palette.”

They also have narrower handlebars and some shorter-reach geometries, but really, they’re prettier versions of the Santa Cruz mountain bikes they’re based on.

Can’t we just accept that there are different shaped people and that they might not fit into the “men” or “women” molds? Does my bike really need a flower-shaped decoration on the head tube? Does a “woman’s” racing bike need pink accents and handlebar tape, or can a kick-ass racing pro woman be able to ride without the color-based gender stereotype?

In any case, the EVO arrived after a bit of early-season backorder and it’s been an incredible bike. The 2012 Red is infinitely better than the 2010 on my Dragonfly. Completely built the bike is at 13.4 lbs, and a few choice upgrades will drop the weight in the coming months as some lighter parts get added. By the time I’m done, including pedals (Crank Brothers Quattro 4ti) and wheels (American Classic tubeless) the bike will register under 13 pounds. With tubulars and lighter pedals, the bike would come in closer to 12—without even going to tricks like a lightweight chain and all-carbon saddle.

The bike rides amazingly and it’s even proven its durability when I unexpectedly, on my second ride, slammed into the back of a parked car while looking at my GPS (that’s another story, in Issue 01.) There is not an ounce of flex in the bike, and yet it’s more comfortable than my Dragonfly. I’m able to bust out a sprint with no delay from pedal stroke to acceleration. But I’m also able to bounce over cracked pavement or cobblestones and not have my teeth chatter.

The Cannondale SuperSix EVO really is a superb all-around bike. Light, stiff, and strong. If only I were a woman, it would be the right bike for me.

Ed. Note: Sent David a Bike Hugger decal to cover the flower on the top tube.