About a week ago, a couple of twenty-somethings from the British Isles traveling to California for holiday were detained by Homeland Security, due to some of the couple’s messages on the social networking media, Twitter. Irishman Leigh Van Bryan tweeted something along the line of the two coming to “destroy America” and “dig up” the grave of Marilyn Monroe. When they arrived in the states, agents detained them for hours, questioning them, and finally deporting them. According to Van Bryan’s travel companion, Brit Emily Banting, agents did not find the messages very funny. Agents actually searched their baggage looking for spades/shovels for grave-digging Monroe’s corpse. So instead of long holiday of partying stateside, which the suspects claim was meant by “destroying” America, the couple were sent right back home.

I am continually shocked by how government officials overstep their authority. I’m not talking about firm action against perceived threats broadcast on Twitter. This is a necessary move since Twitter became the preferred media to disseminate revolutionary manifestos from 21st century intellectual giants like Paris Hilton and that one college kid on the Gringrich staff who knows how to use the app. It is for our protection that Skynet automatically scans the entire Twittersphere tirelessly looking for dangerous instigators. If at 2:15am on Sunday I tweet that I am looking for co-conspirators to go pissing in public fountains, you should feel relieved that the government will move to keep the peace. No, what I am disturbed about is how Marilyn Monroe’s grave has been upgraded to a national monument without the proper public process. Even if JFK thought that was a sweet piece of tail, there are proper procedures for doing these kind of things, even if we have an immediate need to defend her 50yrs dead booty from foreign nationals.

But underneath the apparent farce, it is clear that Homeland Security has missed the true dangers to our society, the threat from within.

Twelve years ago skateboarder and film auteur Jeremy Klein created “Destroying America”, a virtual Devil’s Cookbook of subversive acts. Also involved in the film were Erik Estrada and a young actress/martial artist named Ming Tran. And today, Estrada is a deputy sheriff and Ming Tran is an airline pilot. Surely this is neither a coincidence nor a joke. We don’t need to look to other countries to have something to fear. 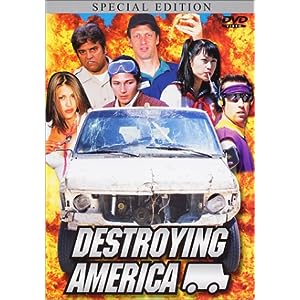