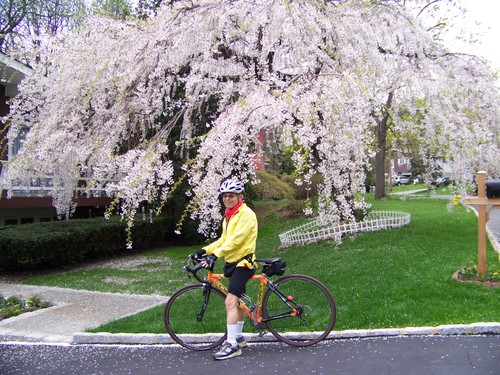 This is a photo of Merrill Cassell, a cyclist, father and former director at UNICEF.

And this is a photo of the bus that killed him last friday in Westchester County, New York.

You’ve probably already guessed that he was riding his bike at the time of the incident. Reports seem to indicate that he was brushed by the bus and ended up being run over by it (though the reports are still a tad unclear–the newspapers without any witnesses to back this up–are saying he “collided” with the side of a bus while traveling parallel to it. I’m not sure how that’s possible.) The bus driver is already back on the route.

His daughter, Tania, today asked the cycling community to take part in Thursday’s funeral by riding their bikes in formation at the head of the procession with the hearse from Our Lady of Mt Carmel Church, 59 E Main St, Elmsford, to Ferncliff Cemetery, about two miles away. The funeral mass, which begins at 10:30 a.m., is expected to be over by 11:30, when we will ride to Ferncliff.

The Westchester Cycle Club and the Westchester-Putnam Bike Walk Alliance are reaching out to their members to show our support for Merrill’s family and commemorate his tragic death. There will be a wake Wednesday from 4 to 9 p.m. at Edwin Bennett Funeral Homes, 824 Scarsdale Avenue, Scarsdale.

Here is a link to the church on Google Maps