In this last in a series of three posts discussing long reach handlebar alternatives to the run-of-the-mill compact road dropbar, I look at a modern reincarnation of a French archetype, the Compass Maes Parallel 31.8 handlebar. 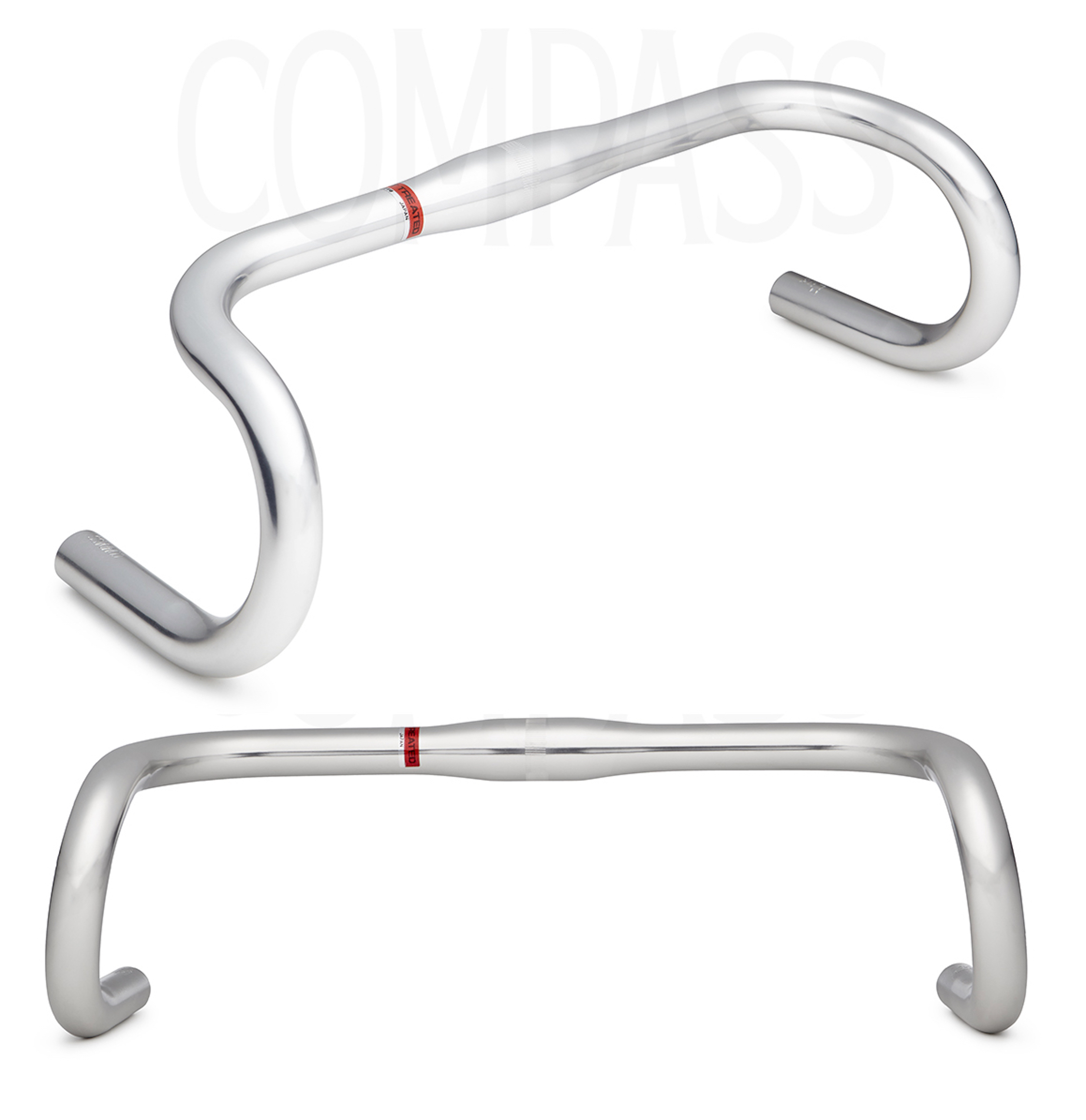 Once upon a time in the mid-20th century, there was a handlebar known  as the “Maes” that essentially established what we today consider the classic handlebar shape for road bikes. Not too much flare, the top flats of the bar running roughly straight outwards from the stem, lower drops not too angled away from the ramps….virtually the picture book definition of what we would define as a “dropbar”. From about 1960 on, the majority of road bikes were equipped with what could be generally considered a “Maes”-type handlebar, even as the brand itself faded away. But eventually the term “Maes” lost its usefulness as a way of differentiating the variety of handlebars that subtly evolved from the blueprint of that Maes archetype. In the context of current products that one can buy, Compass Cycles offers a handlebar that is inspired by the early expressions of the Maes form and yet fits in a modern 31.8mm clamp stem.

Perhaps it is more precise to say the Compass Maes Parallel is patterned off early models of the Atax Philippe Professionnel handlebar from France. In contrast to the later more influential Italian brands, the Philippe Professionnel had a long reach, moderate flare, and nearly parallel drops (relative to the ramps). Whereas the shorter reach and often deeper drop of the archetypal Cinelli models (#64, 65, and 66) reflected the flavour of intense, shorter events that have come to define modern sanctioned road racing, the longer reach French-style bars maintained a certain fidelity to the endurance events and sportive touring activities that found popularity in immediate post-war Europe. Multiple hand positions are the express purpose of any dropar, but the Maes’ long ramps extend the range that hands can roam behind the levers, which was especially important in that era when brake levers were little more than mechanical pivots quite inhospitable to hands.

As dropbar levers evolved into integrated brake/shift controls, the levers grew larger and more ergonomically shaped; the ongoing move to hydraulic road levers continues this trend. Today’s ubiquitous “compact” road handlebar attains its short reach by largely eliminating the ramps of the classic dropbar, which is only tolerable because integrated levers are by themselves now large enough to comfortably be the default hand position for the modern rider. Still, a rider who habitually racks up more than 3-5hrs in a shot may be searching for more options to perch the hands. The Maes Parallel allows the rider to shorten up on the bar and sit more upright on a climb, perhaps resting the lower back muscles a bit. Riders suffering from cramped hands may also find relief on this bar. The longer the ride, the more this is necessary, and that is why the Maes Parallel is ideally suited to long distance rides like randonnees and touring.

Oddly enough, this once common handlebar shape had largely disappeared from the market dominated by the compact dropbar.  There has not been a classic Maes-type bar to fit modern 31.8mm stems, even while there are numerous modern copies of those Italian designs. Enter Compass Cycles.

The $115 Compass “Maes Parallel 31.8” handlebar is an adaption of a previously existing 25.4mm version, both of which are made with the utmost quality for Compass by Japan’s venerable Nitto. The Compass Maes Parallel is largely faithful copy of the old Philippe Professionnel, though the dozen or so Professionnel handlebars I have personally seen had ramps that were almost parallel to the drops, while the Compass is exactly so. Like the older French bar, the Compass is relatively shallow drop (125mm) and distinctly flares out below the shoulders. Because of this, the Compass bar is about 4cm narrower at the levers than where it measured at the bar’s ends (so a 400mm  size bar is 360mm at the shoudlers; the 440 is 400). Seen from above the Maes Parallel drops remain parallel at the bottom rather than angling outward. But before you rush to swap out your current handlebar, you need to think about the stem length.

With a reach of 115mm, the Compass Maes Parallel 31.8 have 30-40mm more reach than the typical modern “compact” handlebar. As compact dropbars represent more than 90% of the typical options on the current road market, and I strongly suggest that any potential buyer re-evaluate their stem length choice when they choose this handlebar.  A strong argument can be made that the most relevant aspect of bike fit concerning handlebars is where the lever hoods sit relative to the saddle, and obviously this Compass bar pushes the levers far forward. Where I would use a 100mm stem on a compact handlebar, I might chose a 70-80mm stem for use with the Compass Maes handlebar…otherwise the levers might end up uncomfortably outside my reach. In both cases the lever controls are the same distance:

…or close enough given that stems usually come in 10mm increments. Keep in mind that if you already use a stem shorter than 80mm with a compact bar, finding a short enough stem is going to be difficult (but not impossible).

There is one quirk about the way Nitto manufactured this bar, that it is only 31.8mm exactly where the stem clamps. The bar cross-section tapers immediately on either side, which leaves no room for accessory mounts that need to clamp onto the 31.8mm area. For instance, K-Edge mounts for GPS units won’t fit; you will want some kind of stem mount alternative.

On my own bikes, I have used the Compass Maes for commuting, gravel grinders, road riding, and cyclocross. For cyclocross I use the hoods and drops exclusively because a cyclocross race is always 30-60min of high output. There’s not much point to having more hand positions since there’s no time to relax. Also, the long ramps got in the way of my forearms when sprinting, even though the Compass’ flared drops keep the bar’s shoulders narrow. I liked it best for commuting, with the bar run a higher than on my stripped down road bikes.

The Maes Parallel was for me a mixed experience on gravel grinders. Most handlebars targeted at the gravel market are similar to compact road bars in terms of short reach and shape of the hook, but are generally wider with twice the amount of flare, but my personal preference for narrow bars finds no fault with the 40cm size Maes Parallel. The Compass Maes’ longer ramps really did save me from hand pain during those 6-9hr gravel grinders. With the shorter stem, the bar tops were 2-3cm closer, so I  could sit up higher and relax my back occasionally on the long climbs. Probably due to the long ramps bending like a spring when you grip the levers, the bar has noticeably more flex than typical roadbars…but not so much as to hamper control. On the contrary, the added give made washboard surfaces seem more manageable. Overall the Maes was a distinct improvement for comfort on really long, grueling rides compared the typical compact dropbar, but in my case this was entirely because of the bar’s roomier upper portion.

There was a drawback to the traditional bend of the bar below the levers however. The Compass bar would be my first choice for a loaded touring bike where the bar would be higher for more relaxed cruising, and then the drops could be more accessible for descents or muscling into headwinds. But on the long, rough, and  fast descents common to the gravel grinders here in Washington state, I prefer to ride on the drops for the more secure grip and control. With the Maes bar, reaching that far down and forward put too much strain on my back, and my weight distribution was a little too forward.  Raising the bar height would alleviate that issue, but that would put the levers higher than my preference for fast riding. My ideal bar for gravel riding would have the long ramps of the Compass Maes Parallel but the more ergonomic lower bend of a compact bar, something similar to the Bontrager XXX VR-C. The takeaway is that handlebar shape should match the bike, type of riding, and the rider’s fit.

A rider has three points of contact to the bike: pedals, saddle, and handlebar. Of the those, perhaps the one chosen with the least consideration is the handlebar. The industry tells us to pick one that is light, stiff, and perhaps aero, but does any of that really matter compared to comfort? Almost all road and gravel bikes on the market right now come with a variation of the compact dropbar; the main differences in geometry are the widths and amount of flare at the drops. Taking inspiration from older French bars designed for long distance touring and racing, the Compass Maes Parallel offers riders room forward and aft on the tops of the bar. This allows the long distance rider to alternate grip and body position for happier hands and less back fatigue. The Maes will require a shorter stem, and the traditional bend below the levers makes riding in the drops more of a stretch if you are used to compact dropbars.

Part 1 of the series