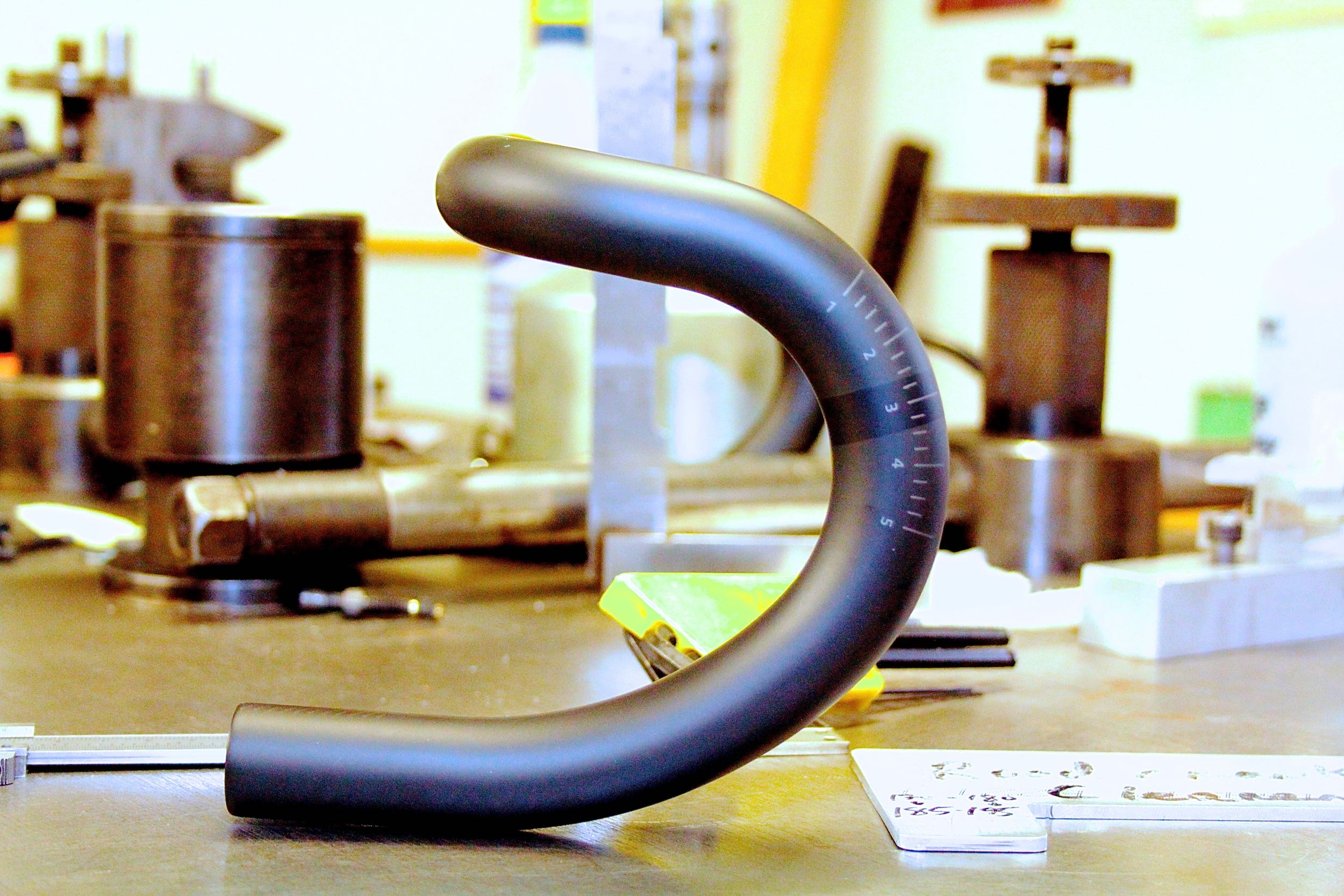 For convenience, I will once again define a “compact road handlebar” as a dropbar with relatively short reach and drop dimensions (70-80mm and 120-130mm, respectively). The curve below the lever attachment point (sometimes known as the “hook”) has a curve that starts as a tight radius where the lever attaches and then gradually increases in radius to form an elegant swoop to the bar ends. Again, this shape is an excellent choice for modern integrated brake/shift levers, but the short horizontal reach dimension tends to compete for the space into which one might want to fit a handlebar bag or randonneur bag. The Bontrager XXX VR-C might be the perfect solution.

Bontrager is a sub-brand of Trek Bicycles of Waterloo WI, a company with a long history. Of course, Bontrager used to be a bike brand unto itself, before Keith Bontrager sold the company to Trek during a time of rampant acquistions in the early 1990s. Just prior to that, Trek had an in-house brand of components known as “Trek System,” and in a curious parallel the Trek System road handlebars had a lot more reach than contemporary offerings from Cinelli, 3ttt, and Profile, though still with a traditional round hook bend. They did in fact seem very French influenced, being similar to the earlier Philippe Professionnel bar, though I don’t know if this was because at the time French style generally held sway over touring bikes (ex: Huret Duopar rear derailleurs). Whatever the reasons, these long reach bars disappeared from Trek bikes by the mid- 1990s when Trek System was replaced with the brand Icon, and later when Trek rebranded their housebrand components as Bontrager during the Lance Armstrong era. Their bar designs generally followed contemporary trends. And now much like other brands, Bontrager’s road bars basically fall in line with all the other short reach, compact dropbars on the market….with some notable exceptions like the XXX VR-C.

This Bontrager bar has a 124mm drop, much like any compact dropbar. The very designation VR-C stands for “Variable Radius – Compact”, which succintly defines how a compact bar’s bend continuously increases radius from the lever attachment at the top of the hook, down towards the bar ends. However the “-Compact” descriptor doesn’t accurately relate the reach, which is surprisingly long at 100mm. Long enough to prompt a reevaluation for stem length choice. If you consider that the lever hood is the default hand position for a rider on a modern bicycle, any bar with so long of a reach should warrant shortening the stem to keep the overall reach the same.

I think a lot of bike fitters ignore the effect that bar reach has on the overall fit of a bike.

The Bontrager gets it reach from the length of its ramps, the section of the bar between the levers and the shoulders. Since the shallow angle of the ramps blends them in smoothly with the levers’ contours, a rider can use the combined length of the levers and ramps as a contact surface for the hands. The rider stretch out while grasping the hoods, or shorten up aft on the ramps to sit more upright. Separate from the handlebar bags, this ability to incrementally alter one’s position on the bike can be a godsend on long distance rides, when changing the body’s angle can prevent a back fatigue from becoming an excruciating pain. According to Bicycle Quarterly’s Jan Heine, it is this versatility of positioning that made long reach drop bars popular in the golden era when European road races were longer

If you only consider the portion of the handlebar below the levers, the XXX VR-C feels largely indistinguishable from the Zero100, and that’s a good thing. Unlike compact bars with sharper bends (eg 3T Ergonova), the gentle curve of this Bontrager gives you the ability to fine tune the angle of the lever upon the bar, while striking a practical compromise between limiting the rider’s additional stretch to the drops and still keeping the bar close to the lever. Some handlebars marketed to smaller riders have such a sharp bend below the levers that it pushes the hands too far away from the brake lever. Bontrager wisely avoided such extreme shapes.

If the XXX VR-C bar has a fault, it is one for which it is unfortunately not unique. The Bontrager’s carbon surface is a bit too smooth at the stem clamp area and where the levers attach. Carbon assembly paste is an absolute necessity for preventing the bar from rotating in the stem. And to keep the levers firmly affixed (in this case the levers are SRAM eTap), I had to rely on one of my own special tricks (someday I’ll reveal in a separate post). Truthfully, a lot of carbon handlebars suffer from this, even if the manufacturers have provided a textured surface to prevent slippage. FSA and Vision carbon handlebars come to mind, but even alloy bars that are painted rather than anodized can have these problems (I’m talking about you, Ritchey Design).

In the third part of this series, I’ll review the more traditional Maes Parallel 31.8 alloy handlebar from Compass Cycles.