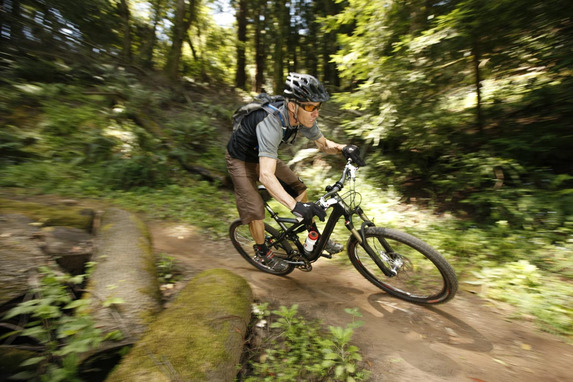 Specialized has just announced a super-incredible program whereby a few lucky mountain bike aficionados will get hooked up with a 2010 Stumpjumper FSR and a full kit of gear in exchange for “tales of sweet singletrack…” as well as photos and videos from the members of said crew. Specialized will even invite these lucky bastards test riders together a few times a year “at some incredibly sweet riding location…” also on the dime of Big S.

Aside from being a sponsored pro racer, this is about as sweet of a deal as you can get, and all it takes to enter the contest is some sort of example of the super-awesome riding coverage you’re thinking of doing to help promote your membership in the Trail Crew. When you’ve got your submission in order, just send a tweet to @iamspecialized with a link to a blog post or photo entry for the contest.

So, let me take a moment here to make this my official entry and let me tell you why I am such a perfect candidate for the Trail Crew.

I think that I’d be a great member of the crew for the same reason that you’re reading this–I tend to blog a lot about cycling, and I happen to do it in front of an audience of cyclists that’s pretty darn large and pretty darn rabid. An audience that you are a part of. An audience that likes to read the word Specialized over and over. Here, I’ll prove it–Specialized.

See, look at that big smile on your face.

I’m also an adventure sports photographer (see these examples here and here) or check out the pretty bike photo that I took, below. What would make that picture better? Me holding a Specialized.

Worried that I don’t tweet or have a Facebook page? Oh, I have that covered. Does this keep getting better, or what?

Maybe visibility isn’t key to winning this contest? Is it journalistic and cycling chops? In that case I’d like to submit my 14 years of mountain bike lust (starting with a GT Avalanche in ‘95 and including a custom Spooky Mothership with the original XTR still on it) that included founding and running GearHead.com (which was later sold and shuttered) the world’s first major mountain bike magazine online. And how many people entering this contest were actually at the Mountain Bike Hall of Fame induction for Dan Koeppel anyhow?

How often do I ride? Every friggin’ chance I get. In fact, most of my career choices have been based around the motivating desire to ride my bike(s) as much as I can. What’s the biggest limitation to my current mountain bike riding you ask? It’s the lack of a bike made in this century. After I parted ways with a truly-too-large FS rig last year I haven’t found the perfect companion for my trail wandering ways, and have been limited to asphalt and pavee instead of singletrack and babyhead-sized rocks. Gosh, if only I had something to ride on with a shock more sophisticated than my Spooky’s Amp B3.

Okay, that’s my entry. You guys probably don’t consider us media folk anyhow, it’s part of the burden of being in the fourth estate. But I do hope that a BikeHugger reader sees this post and aims high enough to tweet you guys over at @iamspecialized and ends up part of the trail crew. Preferably one that’s about 5’7” tall, rides a medium framed bike, lives no more than five miles from my house and is extremely generous with sharing his or her ride.