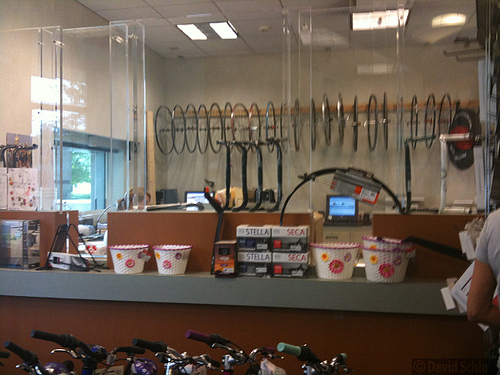 The bike store Cyclesport in Park Ridge, NJ was devastated by fire in April. No one was hurt though it was a close call–one of the tenants in the residential part of the building rushed back in to save her cat and could have easily died if it were not for the heroic firefighter who carried her out. (The cat’s safe too.) Because of the four-alarm blaze, the longstanding staple of the bike community was left homeless.

But that doesn’t stop a good shop. While the landlord waits for the insurance rebuilding to begin, Cyclesport has relocated to a former TD Bank building. Thanks to the terrible economy, the space became available rather suddenly and the bike store temporarially moved into it. The great thing is that they’ve left up the bank’s original structures. The owner of the bank building obviously will try to pick up another bank for the space, so they’ve still got the partition walls for the bank officer’s offices (now filled with bikes) and the vault, as well as the full teller window.

This actually looks really neat, and it’s spawned a desire in me to open a bike store with small rooms focusing on different product categories, much the same way that high-end stereo stores would create small listening rooms aimed at different budgets. I’m also thinking of opening up a shop in a former fast food building, and leave the drive-through window up. Imagine cycling up to a shop window and ordering a cappuccino and a Clif bar.