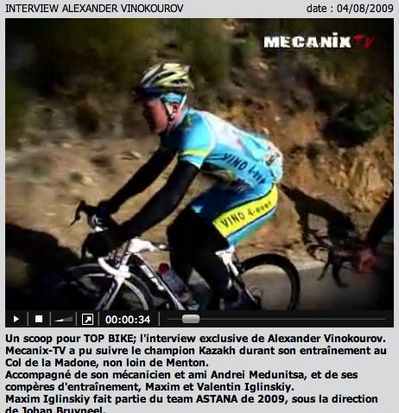 In this oddly soundtracked French interview with Alexander Vinokourov on Mecanix-tv.com, the doper racer is seen wearing new Astana kit with “Vino 4-ever!” on it.

Odd capitalization issues of the slogan aside, why exactly would anyone really want that written on a jersey? Perhaps he’s trying out this bonne mot for a spate of yearbook autographs.

In any case, the video is in French and I’m just going to warn you right now that the music in the intro will make you want to punch yourself in the spleen. Hard.

While my French is a bit rusty, I believe that what the caption under the video says is

A scoop for Top Bike: An exclusive interview with a lying doper, Alexander Vinokourov. Mechanix-TV has followed around the Kazak as he trains on the Madone [the mountain not the bike] to skirt UCI anti-doping rules.

Accompanied by his mechanic and friend Andrei Medunitsa, he practices concealing his EPO use with a catheter supplied by Maxim magazine and Valentin Iglinskiy. Some other guy in this video was partying on Team Astana, while being bossed around by Johan Bruyneel.

I’m not entirely sure about the camera work on the lead-off to this video and the loving camera pans, but I’m pretty sure that Vino wants to go to prom with me.