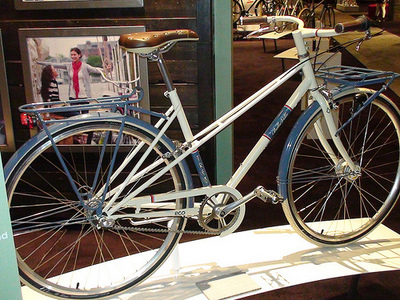 One of the things that surprised me when looking through images from TrekWorld was this beautiful Mixte frame. (A mixte is a drop-tube bike with standover. They’re often called “women’s frames” but that’s a sexist generalization that comes from the history of bicycles and doesn’t related to modern riding.)

The Trek Belleville is a sophisticated looking bike, with a killer paint job and some smart touches. This is a bike that’s part of an overall trend to make commuting and errand bikes actually useful. To wit: the pannier racks actually allow for easy-on-easy-off connection of panniers, something that seems to be a commonly difficult process on many power commuter bikes. This bike reminds me of the steel-framed Raleigh “woman’s frame” bike I rode when I got into cycling.

Like that Raleigh, this bike is driven by a three speed Nexus hub (where my Raleigh was a Sturmey-Archer), which provides just enough gear range for your average flat cities. (Riders in San Francisco should probably look to other models, unless your entire commute is down Market.)

Trek is using the Belleville and other models to make a statement, they’re trying to step away from being thought of as a mass-manufacturer of hybrids and road bikes and instead be seen as an innovator. 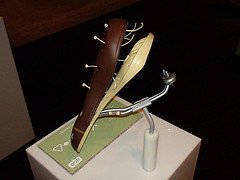 While I don’t think it’s a great design choice, the zip-tie assembled saddle is designed to allow the seat to be recycled after it’s worn out. While it’s a neat idea, I’m not sure I want a saddle that can be disassembled with a pair of scissors.

But I don’t think the design is the point, so much as the fact that someone in industrial design thought up a more environmentally-friendly saddle and someone in accounting signed off on the idea. It’s small touches like this that will someday lead to a greener world. And it’s the way that Trek shows people that they’re thinking more like Saturn than GM.

Thinking of the bike as a whole is a rather new idea in the industry, and Trek worked with Alchemy to design recycled rubber bags that mount to the pannier racks on the bike.

At $659 the bike won’t break the bank, which is good because an economy in which we’re running out of fuel and jobs at the same rate needs a solid price point for a commuting/errand bike like this.