Went through all the stages of suffering on that climb: denial, grief, and finally acceptance. I was on a folding bike with 1/2 the gears and twice the weight of what I’d normally climb a 3.5 mile, 2,000 ft ascent, with an average grade of 10%. It’s a brutal climb on any bike. There are no switchbacks or rest from the start to the end.

Tramway Road is on the toughest list and I’m sure shared on Strava. I measured the ride with Bike Brain, as a memento, cause I wasn’t going fast. Maybe I set a folding bike record, at least a personal best; it was a grind with constant pressure on the pedals and very brief pauses to take photos. Folding bikes don’t reward you for extra effort, like pulling on the bars, or standing up. It’s best to just settle in and pedal. Oh, and Tramway Road has no switchbacks. That’s the first pitch of many. Photo uploaded to Flickr by Bosco.

Put together bikes in No Tell Hotels, Holiday Inns, 5 Stars, and this Tern Eclipse S11i at the Rat Pack Riviera, Palm Springs, CA.

It never gets old, arriving at a hotel room, unfolding a bike, and riding it a minutes later. The day before, I just stretched the legs and rode to downtown Palm Springs and back on the Tern Eclipse s11i. I’d heard about the climb, it was a mile away from my hotel, and decided to go for it. How hard could 3.5 miles be?

The first 1k ft of climbing came and went with my hamstrings letting me know the upright position wasn’t how we usually did this or in that uncomfortable of gear. They were sending signals to the bridge that the legs were giving it all they got, Captain. I wasn’t listening, cause I was focused on breathing the dry air and in the denial stage.

Why was I doing this? Who paved this stupid road with no switchbacks and where does the tram go? Will this bike handle the decent? Are there buzzards in this desert? 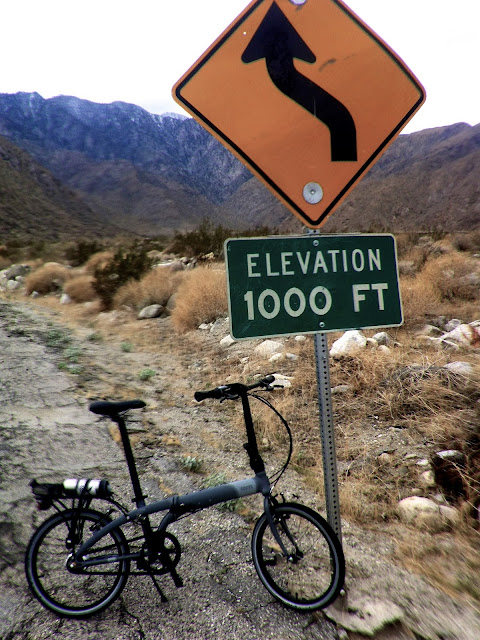 Climbed it on the Tern Link D7i, with another, even harder 1000k ft to go 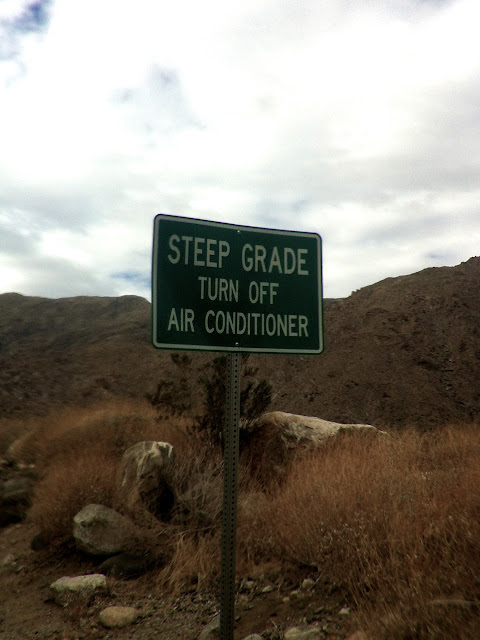 Turn off the air conditioner? More like shut up legs!

I could smell the newness of rental cars burning off as they worked to get up the hill too. Drivers gave me plenty of room and an electrician yelled an exaggerated distance when I asked him how much further to go. Then the grief sent in.

The last few meters of the road are the hardest, at 14.3%, and I was nearly broken, but had accepted it wasn’t going to feel any better. I learned forward to keep the front wheel on the ground, as I forced the pedals around. Also imagined cowbells and a season worth of Suffer Faces coming into the parking lot. No one greeted me though. Just tourists putting on the coats and heading to the tram. I gathered myself with a drink of water, pulled my arm warmers on, zipped up, and bombed back down.

Here’s where the disclaimer comes into the story and I’m not suggesting you do this or recommend it. I held the brakes close, pulled them hard occasionally, and carefully watched the road. Terns are about the ride with their massive OS hinges and I was confidant, just didn’t take too many risks. Because a bike with flat bars connected to a steering mast that holds a small wheel can get squirrelly real quick at ludicrous speed. You can imagine how fast a ~ 10% grade descent is with a Rouleur on board who can’t climb, but descends like the title of Meat Loaf’s second album and hit song. 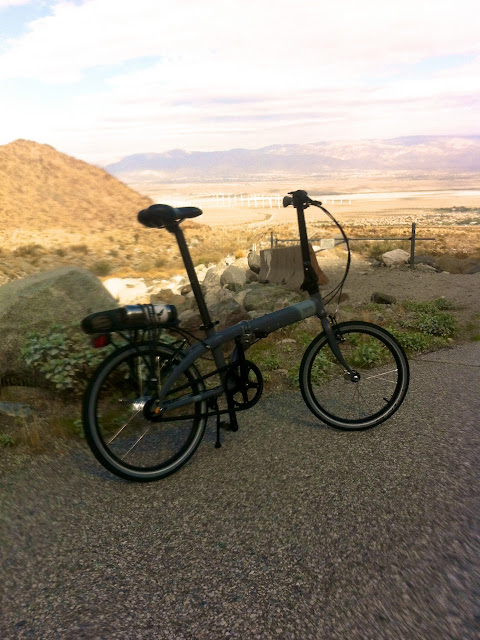 The sightseers who heard me yell, “Woohoo!!” knew the fun I was having and I carried that speed right back into town.

I rode Tramway on a Tern cause I could and it was there. I’m not introducing a new folding bike extreme sport and I don’t suggest you do this ride like I did. Terns ride so well, you’ll likely want to take the long way home and add in another climb with a long descent. You can push yourself into suffering and learn how hard you can go on a folder and they’ll surprise you. Earlier in the year, I toured on a Brompton back East.

Note: I took the photos with an iPhone in the Biologic Reecharge case. They tell the story, but are blurred from the sweat dripped on the case and camera port.