For a couple years I’ve worked at a custom framebuilding operation at the southeastern edge of Fremont, a cozy little Seattle neighborhood. The shop is right at the corner of 35th and Stone Way, which is an important arterial street for cyclists, pedestrians, and automobiles. The intersection is also a vortex of stupid, a paranormally odd location at which assumedly normal human beings spontaneously act with wild disregard for safety or any semblance of rational sense.

Some blame surely falls on the city for not painting turn lanes on either side of 35th, prompting confusion and frustration from drivers, but that alone cannot explain why they do the things they do. I’ve seen south bound drivers on Stone Way suddenly feint right and then crank their car through every lane possible, as if the intersection was a roundabout to go back north, against a red light. Once a saw a car back up at 15-20mph north on Stone Way, whip a backwards righthand turn, and continue speeding on 35th backwards.

Cyclists aren’t innocent of these shenanigans either. There’s a marked bike lane on Stone Way, but casual cyclists love to use the narrow, uneven, and often crowded sidewalk at 15mph plus. And when they’re in the bike lane, too many cyclists are giving drivers too much credit for being aware of their surroundings. I’ve seen more than a couple left crosses lead to a cyclist’s fall…

But somehow the pedestrians annoy me the most. Take this woman below, pictured at the NE corner of the intersection: 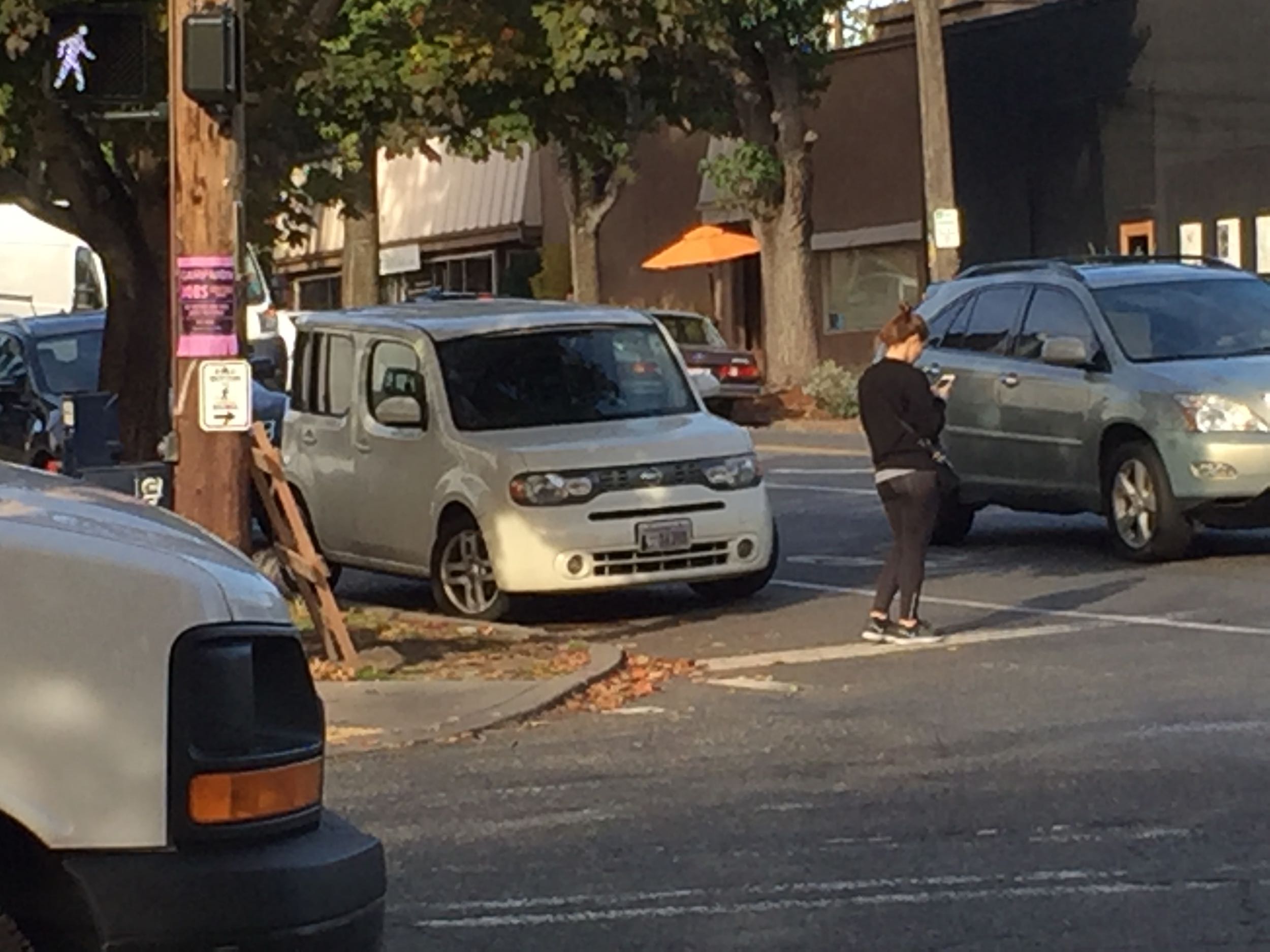 She’s standing at the edge of the bike lane, waiting for the cross signal. Or rather staring at her smartphone. Why is she there? I don’t mind if pedestrians jaywalk, as long it is well-executed and smartly timed. But she’s obviously not looking for an opening to sprint the intersection. She’s not even looking for the cross signal. She’s just there…right where cars and bikes would need to cross to make a right turn. And she stayed there for 2-3 full traffic light cycles.

People do this all the time. Once, there was a guy standing in the exact same spot as a southbound transit bus was attempting to make a righthand turn. Buses not being known for tight turn radii, the driver had to stop because the idiot was in the apex of his turn path…and continued to stand there clueless as the driver eventually had to blip the horn and yell out of the side window for the dude to move aside. He just stood there clueless, like a cat that accidentally crapped in the kibbles instead of the kitty litter.

Then there’s this girl: 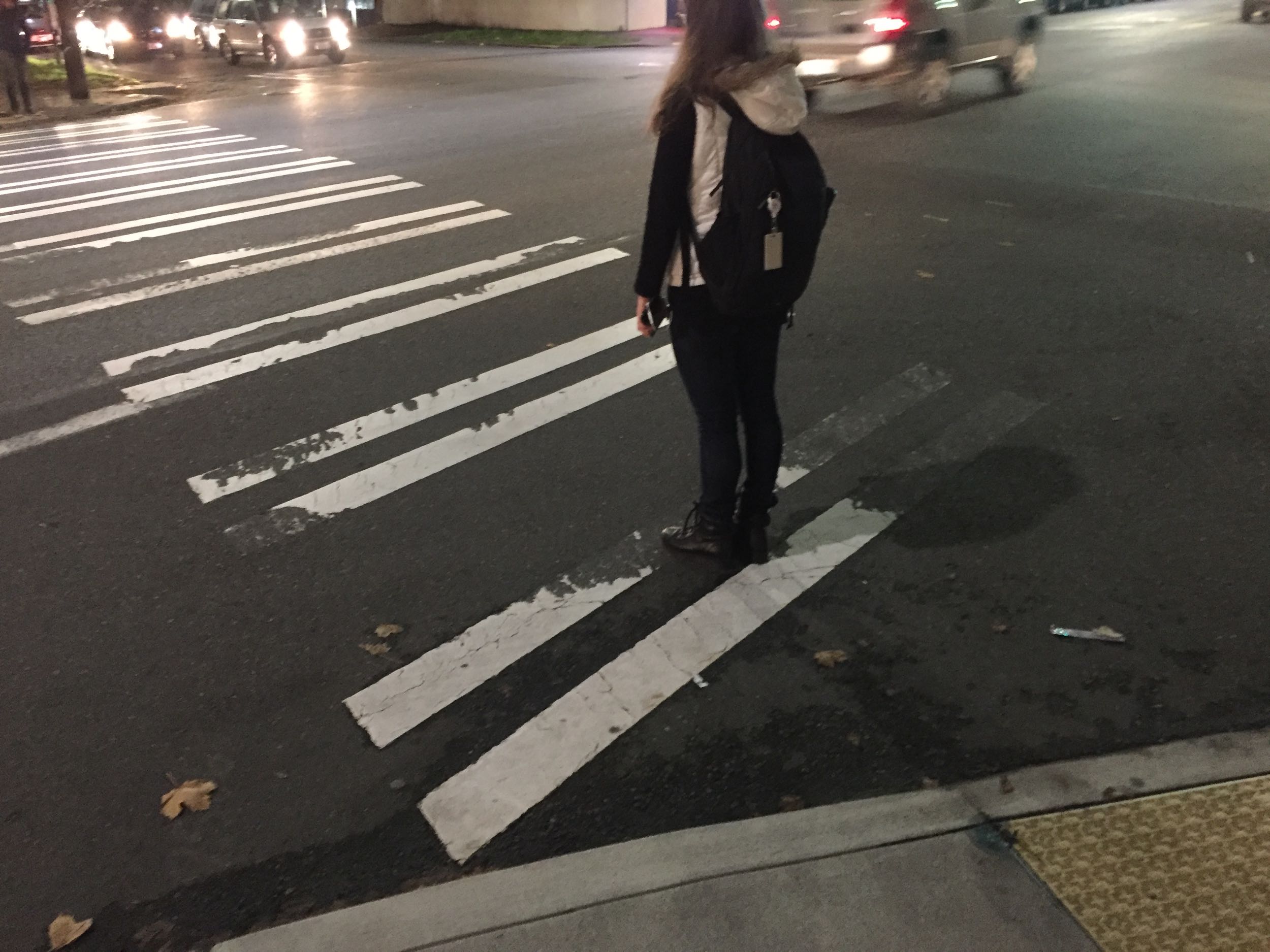 She’s waiting for the cross signal and standing right in the bike lane. So often I see this when I’m commuting. What am I supposed to do? Should I swing out into the car lane to pass in front of her, knowing that there are cars possibly trying to overtake me at that exact moment? Should I cut behind her, and risk that she might spook when I finally register in her peripheral vision? She could spastically leap back for the perceived safety of the curb, the resulting vectors of our respective action creating a collision. What about cars that might need to make a right hand turn? Distracted by an unnecessary obstacle in front of them, they’re more likely to catch a cyclist traveling at their hip with a classic right hook.

The young woman stared transfixedly at the cross walk signal and didn’t move an inch more before the proper time. If she was so concerned about the legality or etiquette of crossing an intersection, what was she doing out in no man’s land for the duration of the red light? Leading off base? What did that gain her? 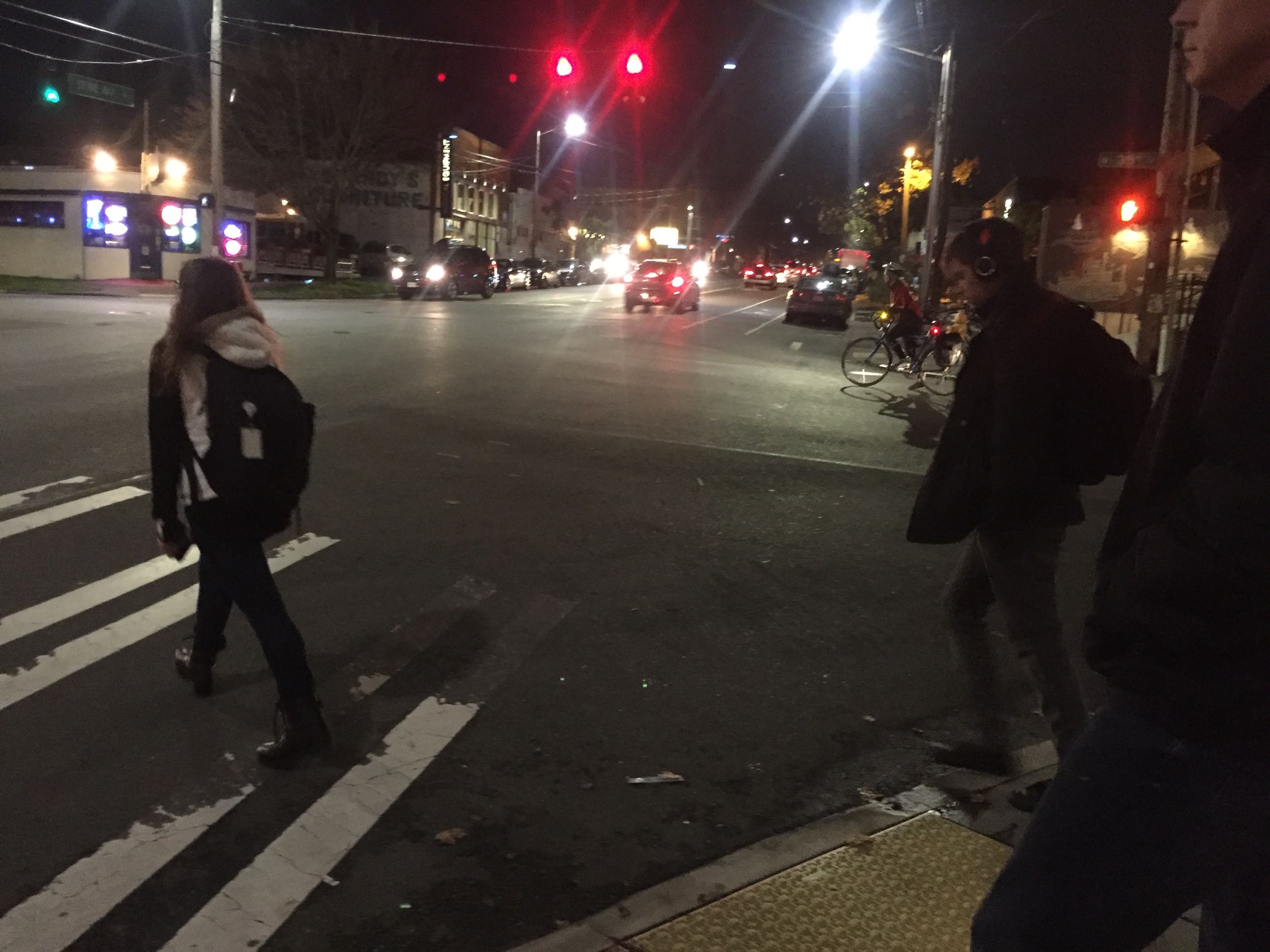