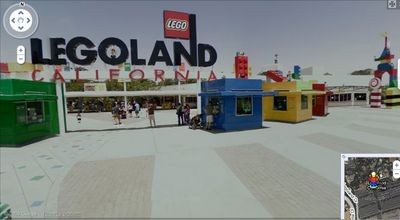 So people get pretty steamed at the idea of Google Streetview the mobile mapping project that is slowly creating a street-level 360 panorama of just about every spot around. I think it’s dandy–I’m a photographer so I’m already used to taking pictures of things wherever I go. I don’t really mind if someone wants to tool around in a car and take cooler kinds of pictures.

Until now there’s been no real way for the Google team to go out and record places like parks, trails and pedestrian malls–the camera and GPS system was originally car-based. Thanks though to a genius idea from one of the product team members while riding a his mountain bike, Google has unleashed the Street View Trike, a cool three-wheeler that’s hitting the road, and the paths, and the sidewalks.

You can even nominate places for the Trike to ride, like the super-cool tour of Legoland in our photo.