The Vanilla Workshop shared PR today about an annual Speedvagen tradition that dates back to 2007. Promising

No hints. No regrets.

“Surprise Me” owners join a unique little family of cyclists who pay for a custom bike and then get what they get. Watch the edit below about the surprise bikes and there’s a Q and A too. 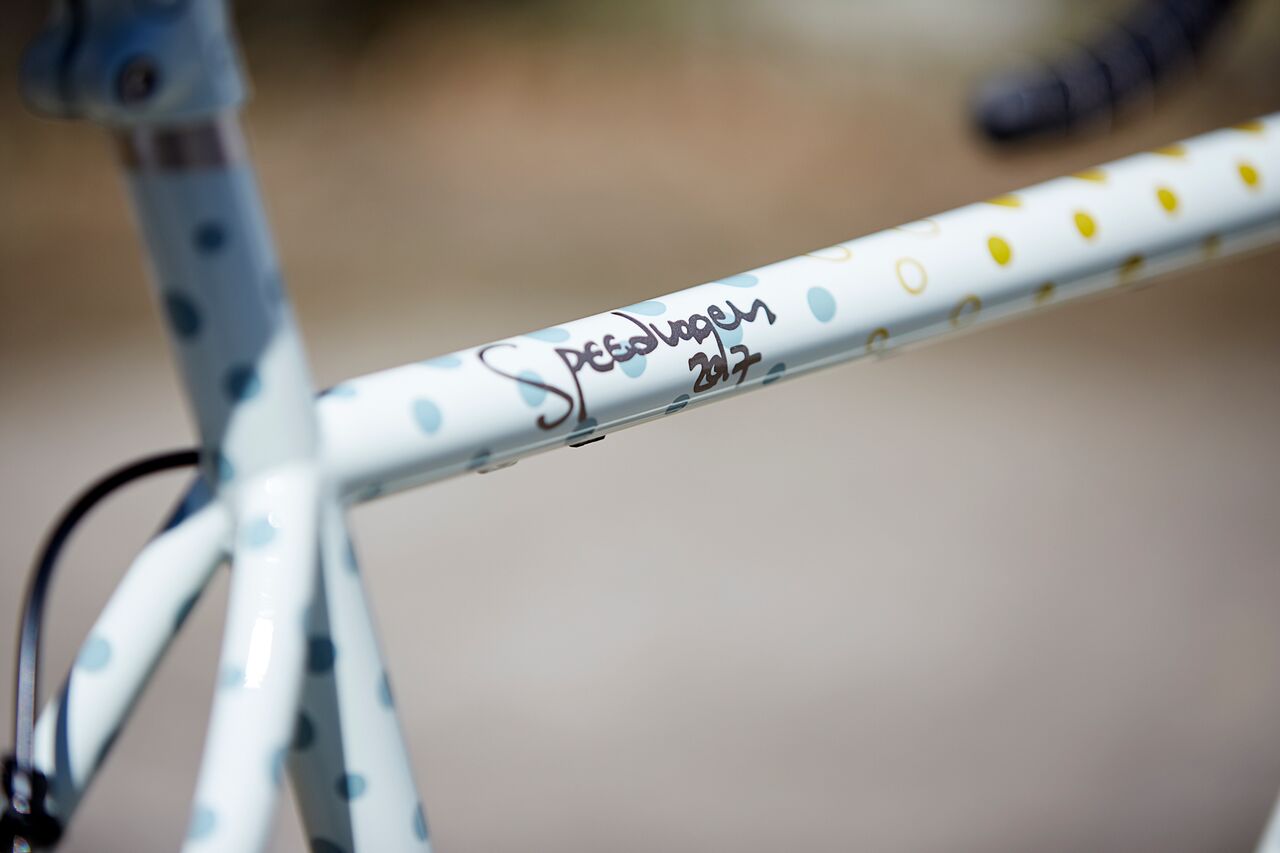 Hope the owners like Polka Dots, cause that’s what they got…..

Q: Philosophically, from the widest possible aperture, what does painting mean to a Vanilla or Speedvagen bike?

SW: It sets the tone for a product. It conveys to the person who sees it, on a very gut level, part of the attitude of the piece.

In the case of my bikes, color has always been a way for me to play with the tension between classic and modern, soft and mean. Picture a superman race bike, modern components, deep carbon rims, but the frame (and some parts) are painted in the softest, prettiest lavender. That bike exudes confidence and perspective and the ability to laugh at itself.

Contrast that with an all black everything bike and, on top of being the same as everything else out there, it’s also playing it safe and in my opinion not particularly exciting.

Q: How does this one component (paint) fit into the whole concept of the bike for you? How is it a reflection of what a Speedvagen bike is and functions?

SW: In addition to the above, I will say that there is tension for me with paint between 1) liking (loving) to go ape shit and take a project to its pinnacle. This usually involves intricate paint work in addition to all of the other stuff that’s going into the bike. The other side 2) is that I know that fancy paint is also something that is prettying the bike up and has the potential to get in the way of the rider, instead of just riding, having somewhere in their mind that they don’t want to scratch their paint. Or even thinking about what another person is thinking about their Speedvagen. These are the kind of distractions that I feel (and know from experience) can detract from the experience of just riding and enjoying.

Q: Paint is typically a pain point for builders, but it seems to be the opposite for you. How did that happen?

Q: Talk me through the technique for painting here at Vanilla?

SW: We start with design. I usually make some crappy napkin sketches and pass them off to Jenn. She’ll turn them into a real illustrator file, then I’ll make tweaks to the colors, tones, placement, and size of graphics and the overall balance of color, then give it back to her to do the final production work on and get it ready for paint. It has started to become more collaborative, but the above is mostly true still and has been since the beginning.

If it’s a new scheme, we’ll do samples, to check graphics sizing and placement, real world color combinations (things can get dicey when you’re combining 4,5,6 plus colors that were never really supposed to go together, in the traditional sense), make changes and then go for in on the bike itself.

Our paint methods are special in a couple of ways:

We mix all of our own colors. This means that we can make small changes to get the tones just right or even create something that doesn’t exist. It also means that we don’t have a bunch of waste (if someone orders a pint of paint and only uses half on a bike frame, chances are (unless it’s a very normal color) they aren’t going to use the rest. That can add up quick. All of our graphics are applied with a series of masks and paint. So any intricate graphic work is all painted on, rather than using decals.

This takes more time (A lot more time) than decals but gives us the freedom to always be changing and improving, rather than being married to one style.

Q: What was the genesis of the first “surprise me” scheme

SW: I think I was talking about things when first starting Speedvagen, the cycling world had come to trust in my aesthetic and people were coming to me telling me “do what you do”. Basically giving me complete creative freedom. Well, Speedvagen, with its sass and irreverence seemed to want to take that a step further and formalize that complete and utter trust in our design sense.

Q: “Trust” is an interesting concept to associate with a paint scheme, but it’s so fitting because your clients’ willingness to be “surprised” by their color scheme speaks to the sort ultimate level of trust they’re willing to put into your creation of these bikes. Curious to hear your thoughts in more detail on that idea

SW: I got into this a little bit above. It is a little funny though, paint is usually the hardest part for people. It might feel the most permanent somehow. Maybe it’s kind of a relief to just hand it off. Kind of a Jesus-take-the-wheel moment.

Q: Imagine it comes with some combination of responsibility and flattery?

SW: True, I definitely like to have a little bit of direction. Historically, if someone is leaving it completely up to me, I try to get a sense of what they like and don’t like for colors.

Q: Bikes are one of the most researched purchases one makes. Being “surprised” is completely antithetical to that. Why do you think the concept of being surprised is so appealing?

SW: Not sure. Maybe the thrill? How many surprises to people usually get in life? As I’m writing this, it occurs to me that I actually love surprising my friends and family too. Things like showing up to visit my daughter for her 18th birthday in Europe and taking her road tripping for a week. That, for me, is the kind of stuff that life is all about.

Q: Where do you find inspiration for the Surprise Me schemes?

SW: It can come from anywhere. One year, I was in the water (surfing) and came across a guy who was riding a board that had broken in half and had been repaired. The repaired section was sanded through and showed the stripes of the paint underneath. It looked rough and a little punk rock, but also completely fresh. That’s where the notion of the distressed graphics came from – the ones that first showed up on the 2014 road surprise me.

Q: Where did you find inspiration for this year’s Surprise me scheme?

SW: I’ve been loving polka dots on our bikes since we started using them on the Leave It On The Road bikes a couple of years ago. I have been talking about and thinking about how to use them more and while they’ve made their way onto portions of bikes (like last year’s SM’s among others) I have still been hungry to do a full polka dot bike. We messed around with a bunch of other concepts and I still came back to polka dots, telling my design partners (Jenn and Richard) “you guys, I really just want to do full polka dots!” This scheme, as are most of them, was a compulsion I guess.

Because of the crispness and simplicity of a bunch of round circles, I also wanted to bring in some rough elements (again the balance/tension that I talked about above), so instead of crisp geometrical text, we did a hand drawn Speedvagen logos and some of the circles are done by hand as well.

Q: Imagine these are like children and you love them all, and i won’t ask you which one’s your favorite, but say you had to ride one bike for rest of your life, which Surprise Me scheme would paint it with?

SW: Probably 2015 with the Ichico text. It’s subtle and understated and also super complicated. It’s beautiful and also mean. And different than anything else out there.

I also love the pink 2016 SM. On paper, this scheme should absolutely not make sense: 3 pinks, two blues with polkadots and a bright reddish orange?! But it really speaks to the ability to bring a bunch of extreme elements into balance.

Q: What’s the meanest thing someone’s ever said about one the surprise me schemes?

SW: “I can’t believe he would just put stickers on top of a raw frame”. This was a forum-ite who didn’t actually know what was really going on with the paint scheme. Imagine that, someone who lives on a forum talking about something that they don’t actually know about…hehe.

Q: You retire the each years scheme, why?

SW: The reason for this is a couple:

I love the idea of only a handful of bikes like this existing in the world. It’s special that way. I love the idea of something not being available forever. It’s ok to want something that we can’t have, especially in a world where some people have become accustomed to getting whatever they want when they want it. I feel like there’s a nice lesson somewhere in not being able to “have” sometimes.
Like we say on our site, SM is not meant to be timeless. Timeless is often “safe”. Surprise me is meant to be a snapshot of where we’re at at the time. Last year the pink SM was that. Is that who we’re going to be in 2 or 3 or 5 years? Not likely. But it was the most potent representation of the Vanilla Workshop in 2016. Some people want a piece of that.

Q: Once customers have seen the Surprise Me images on social media, can a customer still get a Surprise Me and be surprised?

SW: Yes. Once we release SM, we typically get a lot of orders for the remainder of the year. We’ll still use the same graphic breakdown (including the location and orientation of big swaths of paint on the frame) but we’ll change up the colors. This gives people a window into what their bike will look like, but they’ll still get the unknown, too.