It was about 4 years ago when David Schloss said to me, “You should start blogging about Sony cameras.”

“Sure,” I replied and this week Sony overtook Nikon in US sales of Interchangeable Lens Cameras after remarkable growth; including, 23% in the past year.

That was a good tip from David and it’s been a pleasure to cover Sony for the past four years—here’s Bike Hugger’s first post written by him. And, launch a blog about their cameras, followed by another covering the overall mirrorless market.

Will Sony reach number one?

Maybe, if Canon doesn’t switch their tech up soon. Most of the photos taken by me in the past 4 years have been with different Sony cameras. Here’s my first review of the a7R.

The thoughtfulness comes from composing the shot, getting it focused (the A7R uses contrast instead of phase detect focus, read more about that topic here), reducing or increasing the exposure, holding the camera steady, and snap with the loud scheelunk sound.

Sony’s announcement is based on numbers from the retail analysis firm NPD Group citing U.S dollars spent from January through February 2017.

The statement also says that the increase in demand for Sony’s products has grown the overall full-frame ILC market by 5% and would have, according to the statement, declined instead by 2% in the same period.

Sony attributes the sales numbers in part to the popular a7RII and a7SII cameras.

The report doesn’t specifically say who Sony bumped, but it’s Canon or Nikon and the latter has reported financial struggles.

It is important to note that this the report is based on U.S. Dollars, not Unit Sales and Sony have released no data about unit sales figures for the same period.

The full statement from Sony is below. 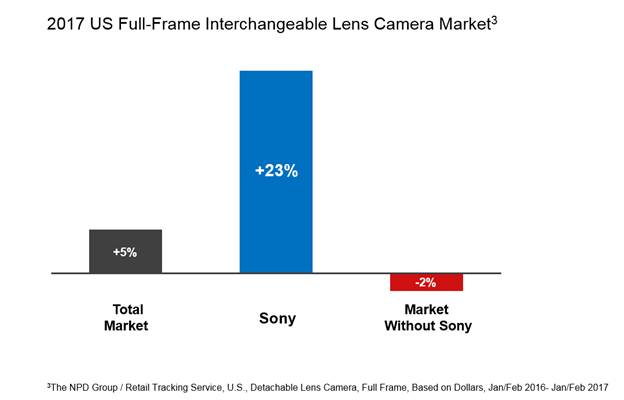 SAN DIEGO, April 14, 2017 – Sony Electronics – a worldwide leader in digital imaging and the world’s largest image sensor manufacturer, has announced today that their continued growth has vaulted them into the #2 overall position in the U.S. full-frame interchangeable lens camera market. 1

Sony’s interchangeable lens cameras and lenses have seen record sales in 2017, in particular within the U.S. full-frame camera market, where they have experienced double-digit growth (+23%) 2 compared to the same period last year.  The popularity of key models including α7RII and α7SII has been paramount to this success.

Additionally, Sony’s rapid growth has helped to drive growth of the overall full-frame interchangeable lens camera market compared to the same period last year.  Without Sony’s contributions, the full-frame market would be facing a slight decline. 3

“Our commitment to the industry is stronger than ever,” said Neal Manowitz, VP of Digital Imaging at Sony North America. “We are always listening to our customers, combining their feedback with our intense passion for innovation to deliver products, services and support like no other.”