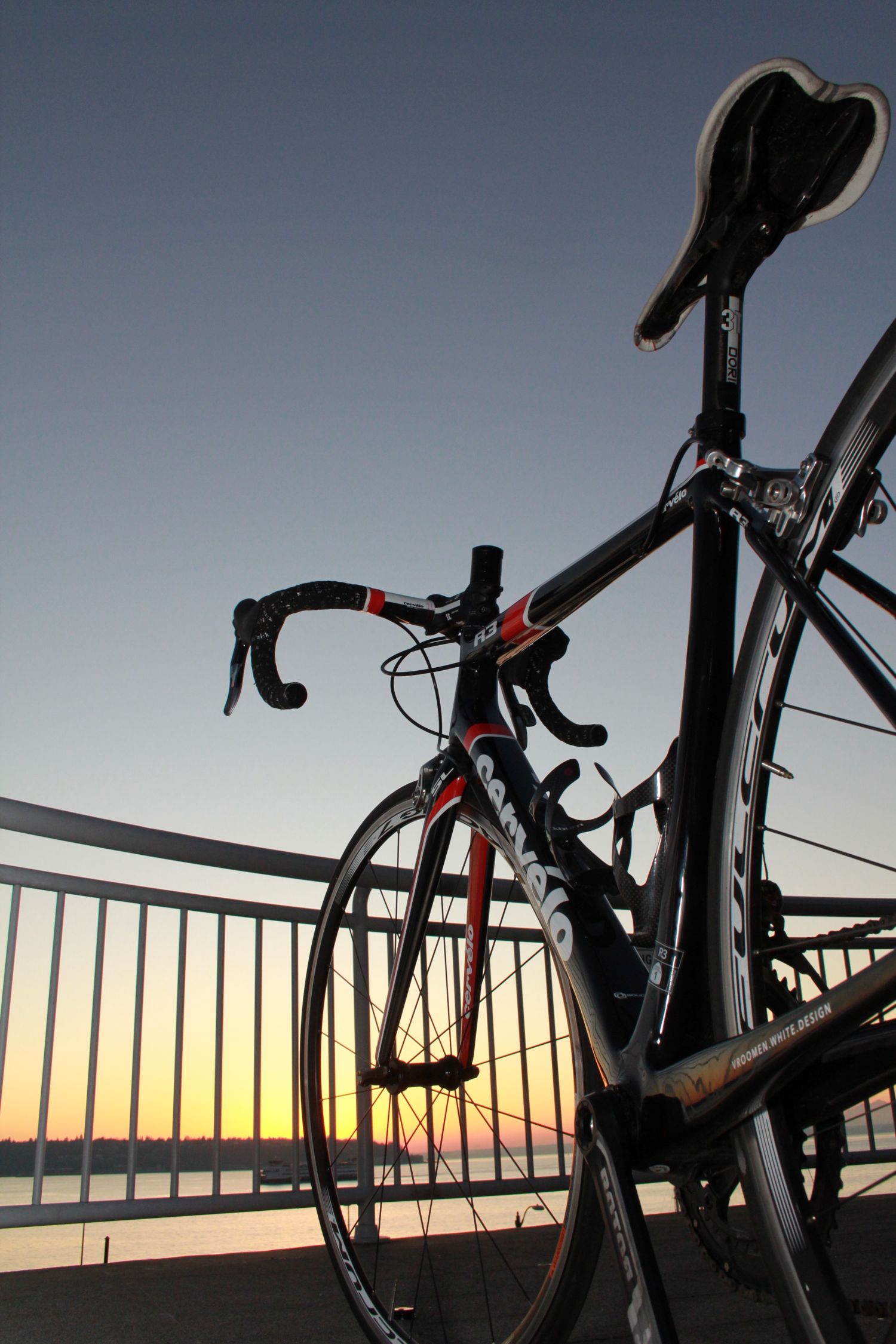 Among frame manufacturers, perhaps none delivery a product with more self-belief and restless pursuit of progress than Cervelo. When more established companies have carefully calculated how best to capitalize on their traditions while still appearing cutting edge, Cervelo has thrown itself into the melee of elite competition to demonstrate their innovative ideas. Where other companies talk of the romance of bicycles and maybe add a little skin appeal for the catalog photos, Cervelo serves up cold dishes of test rig data, wind tunnel results, and an astounding quantity of Pro Tour podium placings. As a company they first had a strong following with their triathlon frames before they succeeded into the road market (a rare feat in this industry), bringing the measured design philosophy to bikes like this R3.

The R3 falls into Cervelo’s “Squoval” category,a term that describes their all-around road frames using main triangle tube with somewhat rounded rectangle cross sections. Different from the “Aero Road” category models S2 and S5, these refined Squoval bikes have been optimized for weight, stiffness, and ride quality ahead of aerodynamics. More striking though are the whisper thin seat stays that make Yolandi Vi$$er look like Adele, though the chain stays seem so solid that the seat stays might be redundant anyways. By paring away excess material wherever possible, bumping up the volume of the structures for stiffness, Cervelo sculpted a frame that has conquered both Paris-Roubaix and Grand Tour stages. The geometry of the Squoval bikes has been slightly modified for the R3 in two ways. First, the head tube has been lengthened somewhat on most models (presumedly the larger sizes) so that the bikes would be more adaptable to consumers as well as professional riders. Cervelo suggests that riders seeking a very low handlebar position would use a -17deg stem while regular guys might choose a +/-6deg stem (and technical partner 3T offers stems in both +/-17 and +/-6 angles). The other change is to the smaller frame head angles which have been allowed to be slackened compared to earlier generation frames. Actually, the evolution of Cervelo’s small frame geometry is fascinating to me, not only because I ride a small frame but also because the changes reveal a lot about how Cervelo approaches design.

Cervelo doesn’t follow tradition. To their minds, a rider should be fitted based on reach and stack (respectively, the horizontal and vertical of the steering axis at the headset top), not top tube and seat tube lengths. Then they figured that a 73deg seat tube angle (for road bikes without aerobat extensions) and a suitable seatpost would be enough to get any rider far enough behind the BB. For front end geometry, they seem to strictly adhere to keeping a constant trail parameter throughout the size range. In earlier frames, that meant all sizes got a 73deg head angle and the same fork rake. This meant that those older bikes in the smallest sizes had wicked toe overlap. Some riders may say that toe overlap is fine because you’re never going slow enough on a race bike to turn the front wheel enough to hit a pedal, but I dislike bikes when this is a pronounced issue. The newer R3 has slacker head angles in the two smaller sizes which would normally increase trail, but Cervelo spec’s those sizes with a longer rake fork. How long? The 51cm model I reviewed had a 53mm rake fork (I measured the fork on a jig). With a 72.2deg head angle (from the geometry chart), the fork more than compensates for the slacker head angle. In the days of steel bikes with steel forks, many builders built their bikes with a constant trail dimension throughout the size range by simply raking the fork blades progressively less as the head angle increased in the larger sizes, but multiple rake options with modern carbon fibre forks require different moulds, which becomes expensive. Most mass-produced bikes on the market therefore use the same fork rake regardless of the head angle, so that the smaller sizes have quite large trail numbers. The R3 fork also uses a tapered carbon steerer to improve strength and steering precision. Rather than 1.25” for the lower race like Giant and a few others, or 1.5” like everyone else’s tapered steerer, Cervelo decided that 1.375” was ideal for non aero bikes.

This unyielding approach to the bike design as a whole includes details like the crank and bottom bracket. The R3 uses a Cervelo standard known as BBright. Essentially, it is an asymmetrical BB30 with the drive side bearing positioned at 34mm outboard like BB30 and PF30, but the left bearing sits 11mm further outboard (or almost the same position as a typical external bearing BB). With a 30mm spindle, the crankset can be built with a lightweight yet very rigid alloy spindle, the frames asymmetry allows extra wide to be added to the left chain stay and the left side of the seat tube to resist the lateral forces due to the drivetrain. I have many times seen data from other sources showing the left chain stay sees greater loads in a lateral plane than the drive side (which comparatively sees more vertical loads). The Cervelo design will still accept typical 24mm spindle external bearing BB cranksets such as SRAM GXP and Shimano Hollowtech II (adapters may be required) and dedicated BBright cranks from companies such as Rotor and FSA. Don’t get me wrong, I’m not exactly thrilled at the arrival of yet another BB standard, but BBright is the most logical attempt to deal with the true nature of the loads a rider puts into the drivetrain. The fact that my favoured Rotor Components make BBright-sepcific crankset makes the idea a lot more palatable to me. However, bike manufacturers really do need to cool it with inventing new BB standards. And as far as I can tell, BBright frames do not accept cranks with standard BB30 dimensions, nor will it accept the new BB386 standard develop by FSA and Willier Triestina.

Almost as a surprise, the R3 uses a standard 27.2mm seatpost rather than an ISP or the very trendy proprietary aero seatpost (such as the Specialized Venge and both CerveloS2 & S5), yet in my observations slender, round seatposts are both easy to design around (i.e., allow design for weight savings) and allow more flex to save the rider from road vibration. My test bike had a 3T post to match the bar and stem. Speaking of which, though I love 3T ARX stems because of their light weight, clean design, and 17deg option, I don’t care for the ergonomic 3T handlebar designs. 3T offers 3 bend styles. The Ergosum bend is a similar to the “compact” bend from FSA and the “RHM” bend from Deda Elementi, but with more reach. It’s a personal issue, but since I throw the bike side-to-side quite a bit in a sprint my forearms get fouled by the shoulders of the bar. The Ergonova bend on the review has a shorter reach and drop, but the sharp angle at the hook doesn’t make it easy to reach the brake lever from the drop when you have small hands, which is ironic since this bar is marketed to smaller riders (I had the exact same issues with the older Ritchey Biologic handlebar designs). Sure both the Ergonova and Ergosum bends have fans among both consumers and Pro Tour riders, but the 3T bend that I like the best is the Rotundo, a traditional Italian-style short drop similar to the old Cinelli “Giro d’Italia” bend. Luckily, 3T offers their three handlebar quality levels (two carbon, one aluminium) in each of the 3 bend styles.

Before this bike, the only Cervelo I had ridden was a brief taste of a P3 triathlon bike. Unfortunately, the smallest size R3 available for test was a 51cm rather than my normal 48cm. Though I could roughly duplicate my preferred horizontal bar-seat distance, the bar sat significantly higher than my preference, especially since Cervelo purposely avoided overly short head tube lengths. However, that issue did nothing to detract from the ride qualities of the R3. Compared to my personal Giant TCR, a bike which I rank as the stiffest I’ve ever owned, this bike is definitely a smoother, more tuned sensation over rough pavement. It was immediately obvious why this bike would be chosen for Paris-Roubaix. The R3 is especially adept at delivering your wattage to the rear wheel while being neither a noodle nor a device of corporal punishment. On the bricks of Belltown and the wrecked asphalt of West Seattle, I had precise control, a measure of comfort, and I could smoothly accelerate when other bikes might have me bouncing too much to really crank it out. Riding on the rivet, the R3 was superlative, but out of the saddle it was a different matter. If I had to criticize this R3, it would be that it was too sensitive to handlebar input in turns and throwing the bike side to side in a sprint. I expect that this is related to the 51cm size’s front end geometry.

My Giant TCR has a trail number in the high 60s, while my old standby Bianchi EL/OS (18.5-lb) has a trail of 57mm. The 51cm R3 I rode had 53mm of trail while only weighing 16.5-lb with stock clinchers. That’s a light bike with quick steering. For my tastes, the bike required just a little too much attention at handlebar input and I couldn’t get comfortable while sprinting out of the saddle. I actually think that the 48cm would have worked better for me since that size has a 70.5deg head, which with that 53mm rake fork would have put the trail at 63mm. That combined with a lower handlebar height would have likely stabilized the bike for my size and riding style. This is merely an issue of personal taste, and it’s unfortunate that I couldn’t test the smaller frame, because I suspect that the 48cm would have been really sweet for me. This R3 is by far the lightest bike I have ridden with a trail number in the low 50’s. If anything, this experience just reinforces that one should be properly fitted to a road bike. Further, for riders who would take the medium to larger sizes, the geometry of the R3 in those sizes is actually quite similar to the rest of the industry, and so my experiences with the R3’s steering geometry would have nothing to do with you. Without hypothesizing how a smaller size would handle, this R3 was still a very efficient pedaling platform from the saddle, and though it does not tolerate inattentiveness in a turn, the R3 tracked through the corners like a hawk when handled with purpose.

If one is searching Cervelo’s road line for an all-around race frame, one shouldn’t be surprised to find the answer in the R3. It has a more versatile character than the S5 and S3 aero road bikes, to be lighter and more comfortable, but the R3 has racked up frequent podium placings in sprint stages and classics. Among the Squoval bikes, the R3 sits above the heavier RS but is still less than half the price of the R5 ($4900 frameset) or the stratospherically expensive R5Ca (“Project California” frameset $9800). With a lighter set of wheels, this bike would have dipped below the 16-lb mark without really crushing the budget or using fragile boutique parts. With the broad road bike line, the Canadian bike company that was once only known to triathletes becomes a premier road brand, using rigorous design and development to excel where tradition was absent.