Robert Jolly wrote this post. He is the Client Relations Director at Happy Cog Studios and is an avid cyclist and triathlete.

With An Event Apart (AEA) Seattle over and my temporary captivity on a flight back to Philadelphia, I thought it would be good to recap the Mobile Social (MoSo) ride and event that happened this past Sundayr. This was my third Mobile Social event and my first time to ride a bike in Seattle. Byron was kind enough to allow me to borrow the Brompton folding bike to use before, during, and after the MoSo.

Philly has had it’s usual mix of schizophrenic Spring weather to really make a trip out to Seattle appealing–with or without all the rain. I awoke on Sunday morning early–body still operating on Eastern Time–and put in a solid, 9-10 mile run. This happened while the rest of Seattle attended early morning religious services to thank their respective higher powers for the AMAZINGLY BEAUTIFUL SUNNY MORNING. I say this only because it seemed like there was a distinct lack of people outside enjoying the day. 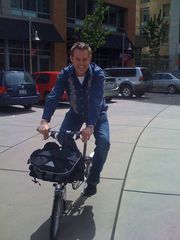 After burning up my legs on the hills around the Queen Ann neighborhood, I hooked up with the Huggas at Hugga HQ to pick up the Brompton. I got a quick demo of how to fold and unfold the bike before taking it out for a spin.

The Brompton is not just a fun bike–it works for you in the urban setting. There’s no need for a lock, because you can fold it like a Transformer into a compact, rolling unit you can take with you into the shop, restaurant, office, or anywhere else. It’s a conversation starter, too. Not like taking a puppy to a college campus to meet coeds, but having people from all walks of life look, ask questions, and then ponder how a bike like that might work with their lifestyle.

I rode to the Capitol Hill neighborhood, using the lowest of the two available gears (on this particular model) to make it up the hills. The gearing seemed right for me, even though there were only two. The bike, to my surprise, really felt snappy and fast.

I bypassed Elysian Brewing, because I knew there would be beer after the MoSo ride later in the day. I rewarded my self control with a Top Pot donut and coffee ate one of their locations on Hollywood (is that still considered Capitol Hill?), and then rolled over to visit the REI retail mothership to check that action out. There was a huge sale happening and everyone (who had previously been inside at church) were now at REI buying carabiners and stuff.

To REI’s outdoor-loving, bike-hugging credit, every bike rack outside was filled with customer bikes. As soon as one cyclist left, another arrived. With turnover like that, it’s hard to imagine we’ve all been crying about the recession and stockpiling necessities like Top Ramen and Tang. Before I knew it, I had to put the armload of stuff back on the shelves and ride like the wind to make it to the meet-up point for the Mobile Social.

About 25 cyclists gathered at the Bell Harbor Conference Center where the AEA conference would be meeting for the next two days. We talked a bit amongst ourselves about riding and our interests in technology (for those of us attending the conference). Jeffrey Zeldman and Eric Meyer, hosts of AEA, arrived and said hello to everyone, snapped some photos, and saw us off for the ride.

The pace was relaxed, and it offered everyone a chance to talk to their fellow Mobile Socialites about topics related to cycling, work, and culture. Riding South on Alaskan Way, a few motorists said “hello” with their horns, and one or two other folks joined in on the ride as we began our journey toward Schooner Exact Brewing’s new location to sample their wares.

We rode through the more gritty and industrial areas of South Park in Seattle to see the city from a rather unique vantage point–certainly one that visitors like myself rarely experiences. Arriving at Schooner Exact, we were greeted by not only the staff of the brewery, but also by a few other cyclists attending AEA who did not have bikes. 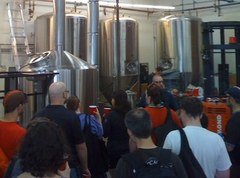 The gang from the brewery talked with us about their beers and the operation they’re setting up. We enjoyed some truly fresh and delicious Pale Ale and IPAs, Byron gave away swag from Crumpler, Princeton Tec, REI, IE8, and a Yuba Mondo bike. We posed for a group shot by the brew tanks, then said our goodbyes to the fine folks at Schooner Exact.

Some riders needed to split for other commitments, and others hung out for food and additional beverages at Stellar Pizza in Georgetown before parting ways. There was representation from REI HQ, AllRecipes.com, King County IT/IS, and Happy Cog. We talked about teh webs, our work, and other stuff while it rained outside just to spite the perfect day. 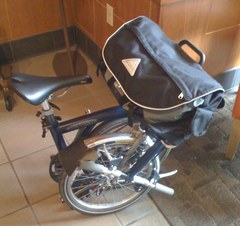 In the hotel and at AEA, the folding bike was a great icebreaker. People can’t dislike it, even if they find the notion of having a bike at a conference strange. Getting on an elevator with a couple from the United Kingdom at the hotel brought out immediate conversation instead of the awkward stare-at-the-floor silence. Conference speakers and hosts joked with me about riding the bike on stage which would have been a fun endorsement of cycling and the Mobile Social concept. Although it didn’t happen this time, I intend to encourage more conference speakers and attendees to ride at future events.

What do you think about the Mobile Social concept? And, if you rode with us in Seattle, what was your experience?