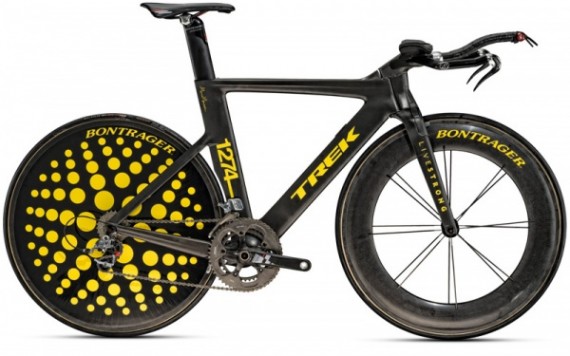 This morning I was out on a shakedown cruise on a new bike and forgot to bring my phone with me. That’s a shame as a friend was busy trying to alert me to the fact that Lance was stopped in the town below the trail I was on, eating a scone.

When I talked to my friends at the local shop hours after this had transpired, I asked if Lance had stopped by them. My grumpy-ass mechanic friend replied. “Who gives a shit?”

Who? Well any of the people that will benefit from the $1.3M raised last night for the Livestrong Foundation in the auction of Lance’s art bikes. Anyone who won’t be scared and alone because of their help.

Or the millions of people who enjoyed watching him race the Tour, who then went out to local bike shops like the ones my friend works at and bought bikes–thereby insuring his paycheck.

I get that people don’t like the guy, but you gotta’ admit, he’s accomplished things. Hell, I’ve met him and scads of bike racers and even if I don’t like them, I’m still interested enough to care if they walked into my workplace.

Heck, even if you’re on the “he must have doped” train he seems worth meeting to me. I’d be interested in meeting A-Rod even though I don’t follow baseball and I know he doped. You can pump me full of gamma radiation and I’m still not going to hit as many home runs. And I’m not going to be able to raise a cool million greenbacks in a single auction.