So I was working a typical Saturday at the shop, splitting my time between wrenching on bikes and handling walk-in retail traffic, when a couple walk in from the ephemeral Seattle sunshine. Upon speaking to them, I learned that they were in the process of moving here from Japan. At first I was slightly embarrassed since I had moments before been practicing Japanese profanity with the shop’s long-suffering Japanese bookkeeper, but either they hadn’t heard me or they politely ignored it. Of course, since I am going to Japan IN TWO WEEKS for a solo bike tour, I’m eager to talk to anyone from Japan. And then came the big surprise…. 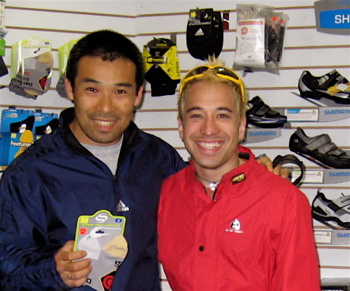 The guy just retired from a 17 year keirin career. His name is Koh Annoura, and he competed in several UCI world cup events back in the day. Of all the shops to walk into in Seattle, he comes into mine. He was pretty surprised too, since 1) among shop monkeys, I have a special appreciation for keirin racing 2) we have a full custom frame shop in back.

He had this really cool brake adapter for keirin bikes that allowed one to mount high-quality road calipers (in this case Dura Ace 7800) to a keirin frame. I’m talking super-duper lathe or maybe CNC-milled pieces; really cool stuff. We had a short discussion about the cult of keirin bicycles frames being imported from Japan, and about how the fashion is to ride these bikes without brakes. And here was a professional rider before me who was explaining to me how real keirin riders prefer to ride with brakes when not on the velodrome. Take note of this, all you hipsters out there who consider yourself “purists” because you ride a Kavalinka or Nagasawa frame without brakes around town. And lest you think that the keirin professionals are pansies for using brakes, you should see how these guys race. I’ve seen how gnarly a Japanese keirin race can be with my own eyes.

Unfortunately, I don’t have pictures to show of the brake adapters, since Annoura-san set the bag down outside while chasing after their younger son. Wooosh!…..someone walked off with them. That sucks!

Stunning misfortune aside, it was great to talk to Koh. He and his wife were going to give me some phone numbers to other keirin racers in the Roppongi neighborhood of Tokyo, where I’ll be staying the first week of my Japan trip.