A Look At Steve Hed’s Adventure Bike From Interbike and the first time at Mandalay Bay.

Interbike is the continent’s biggest cycling convention which hit Vegas’ Mandalay Convention Center for the first time this year. Going into the event it was known that things pertaining to “gravel riding” and adventure would be a hot topic. However; little did we all know just how much of an adventure it would be to get around in the veritable corn maze of booths and hung over bicycle dealers. I wasn’t prepared for that at all. 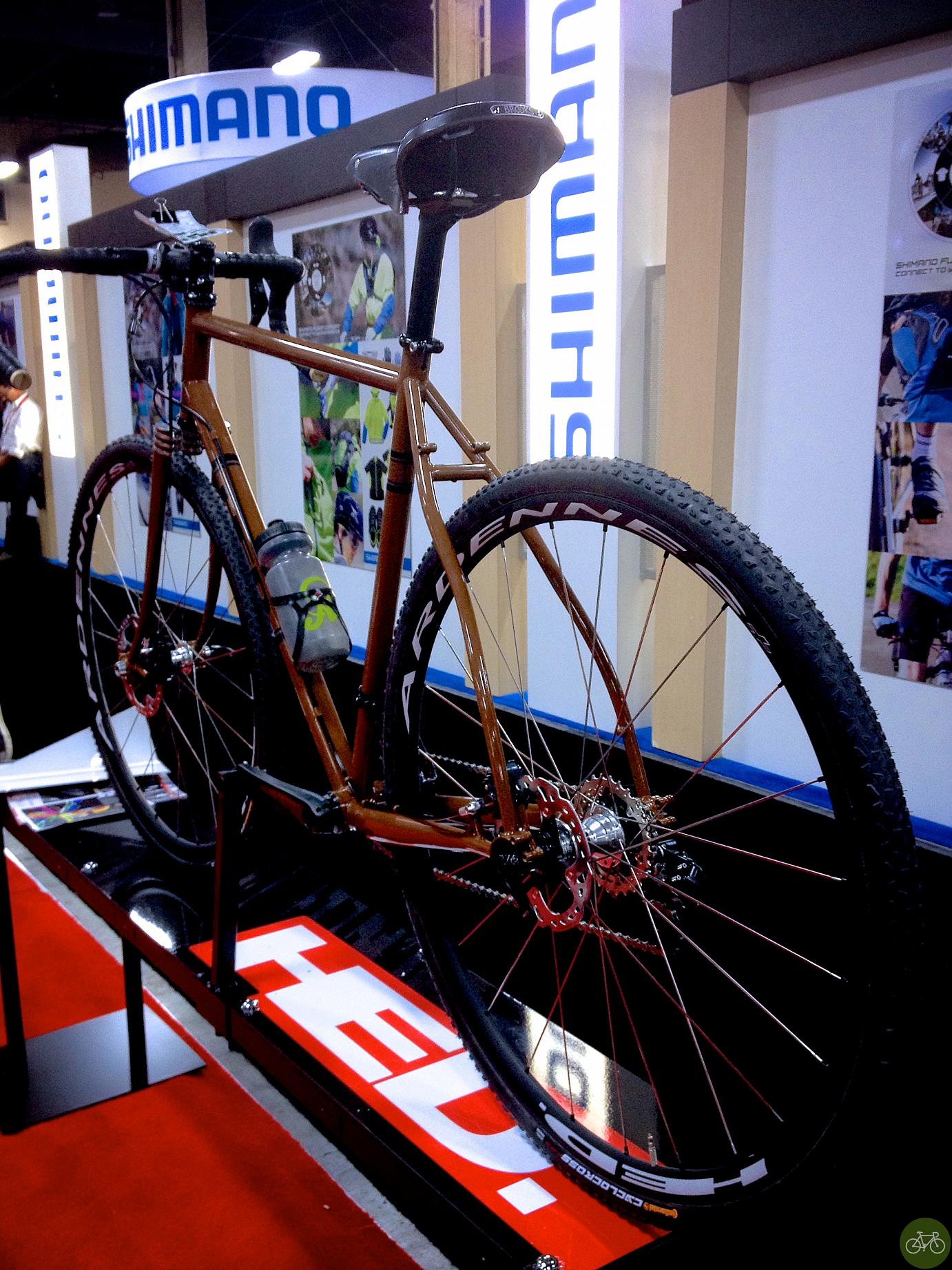 I also wasn’t prepared for what I saw in the HED Wheels booth. However; it was easily the high point of my Interbike trip this year, and it wasn’t just about wheels either. It was about wanderlust, the story about going for an adventure that led to the Iron Man, the Tour de France, the rebellion against racing, and back to a rural Minnesota road again. It was embodied in a coat of brown and black paint over some expertly crafted Columbus steel tubes. At its heart is the story of Steve Hed: the adventure cyclist cum aero guru to the racing gods. Who knew?

Steve Hed grew up in rural Minnesota, a land of agrarian beauty and outdoorsman who take to rod and reel more than they do the wheel. Not exactly the place you might think of for HED Wheels to come out of. Steve told me he loved the bicycle, rode gravel roads in his youth, and was drawn to cyclo-touring. An adventure was his motivation. He was looking for another scratch to satisfy that itch when he heard about the Iron Man. He thought it was an adventure race, but one thing led to another and then it was all serious, aero, and well, you know the rest of the story.

Gravel riding has taken center stage in the Mid-West and Steve Hed was not at unawares when it comes to its popularity here. The grassroots nature of the events on the rural roads struck a chord with Steve and reminded him of his youth, riding gravel roads near his home. He also noted the fixed gear culture that sprung up in the early 00’s. Steve believes the fixed gear thing was a rebellion of sorts against the road racing scene that was a big part of what his HED Wheels company was all about. Soon though, the fixed gear guys were looking to go further, farther, and needed more than one gear and a constant turning of the cranks. Steve noted that he was helping fixie riders put gears on their bikes and that they were now looking for an adventure as well. All these things; gravel events, fixed gear rebels- they conspired to motivate Steve to come full circle and eventually, by way of Eric Noren of Peacock Groove, have his own adventure bike made. This is the very bike that was by far the highlight of my Interbike.

The Bike: A steel bike, which Steve prefers, made from Columbus tubing and torched together per Steve’s inspiration by Eric Noren of Peacock Groove. The bike features Ultegra Di2 and the new Shimano road hydraulic brakes. Steve insisted on certain details like the chain stay mounted brake caliper and the clearances for 650B wheels and 700c wheel and tire set ups, dependent upon where the bike will be ridden. Rack and fender mounts, of course, and the surprise addition of front and rear through axles make this bike a forward thinking design and not just some rando-inspired knock-off of a French camping rig.

While other show goers were ogling fat bikes and enduro this-and-that, the HED Wheels booth had a gem of a bike worth the adventure of navigating the maze of Interbike. I am pleased to have (literally) stumbled upon it. Now……about getting out of there……that was a whole other adventure!

Ed. note: Not only was this the only brown bike we’ve ever liked, we considered it best in show. For more about what Steve was thinking when he built it, check our YouTube interview (Ted makes a cameo) and more photos on G+. Guitar Ted is a native of Iowa, and still, meanders in “fly-over” country. He has been big wheeling since 2003 and mountain biking since 1989 on a proper mountain bike. Before that he just rode any ol’ bike off road he could get his hands on. These days he also has a penchant for riding gravel roads, and has put on the Trans Iowa endurance gravel road race since 2005, along with other shorter fun rides. Guitar Ted also works at a local bike shop as a mechanic with over 13 years experience in retail bicycle shops. Oh, and by the way, he actually does play a mean guit-box!