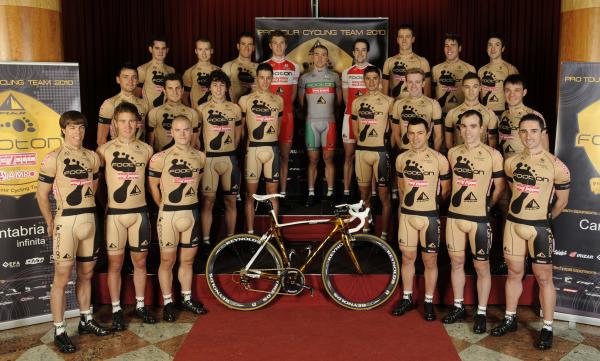 Clearly not wanting to be left out in the “ugly kit” department, the 2010 Footon-Servetto-Fuji team has really put the “ugh” in “ugly.” Unless this gear was designed with desert camouflage in mind, there’s really no reason why beige should be the dominant color here. (According to the press release on Cyclingnews this is “gold” not beige, but I’m not thinking that translates too well in photos.

If that weren’t bad enough, I think the large foot imprint’s going to be the start of a lot of “we stomped all over them” jokes. Finally, while one leg is black the crotch-region is beige. That’s…just…a…bad…idea.

The presentation ceremony of these jerseys was unique as well “Vuelta a EspaÃ±a’s emcee Juan Mari Guajardo’s began the ceremony with a short film depicting a fictional chase scene in which burglars try to steal a valuable package, but are out-paced by world Rally Champion runner-up Dani Sordo’s skilled driving. The film ended with the truck pulling up to the hotel, and then fiction became ‘reality’ as the riders in black capes go to the truck to rescue the goods – the team’s Fuji SST 1.0 racing bikes.

Removing their black capes, the riders revealed the team’s new kit, designed by Dario Urzay, in gold with black logos.”