Yes, yes, I know that I’ve been back from Japan for two months, but I had one more story to post. 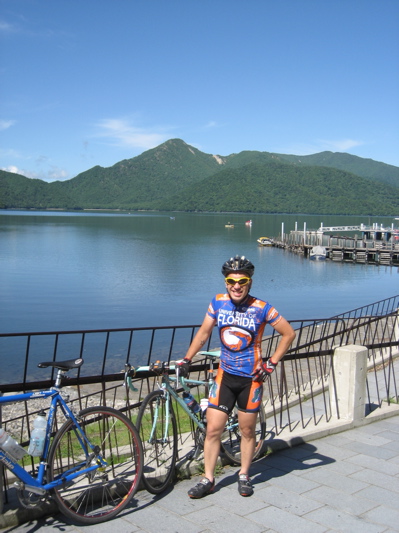 So after taking the train back to Tokyo from Matsumoto, homeboy and I dropped off most of our stuff at the embassy and jumped another train to Nikko. Done with bike touring, we could do some sightseeing and then fit some rides in between.

Nikko is a small town due north of Tokyo best known as the final resting place of Tokugawa Ieyasu, founder of the Tokugawa shogunate that united feudal Japan for 250 years of peace and isolation from the outside world. The temples and shrines under ancient trees are the mystical heart of Japan, nestled in the mountains of Tochigi Prefecture. Yet despite Nikko’s emerald tranquility and ancient refinement, I would soon be engaged in a highspeed dogfight above the shogun’s tomb.

We woke up early on the second and last morning of our Nikko stay so that we could squeeze a bike ride in. Since the day before had been a constant downpour, we had done a walking tour of the most famous sites, but we were hungry for some hard riding now. To the east was a road that led up to a mountain lake. The innkeepers promised that it was quite steep, and even more intriguing was the fact that the road up the mountain was entirely separate from the one back down. 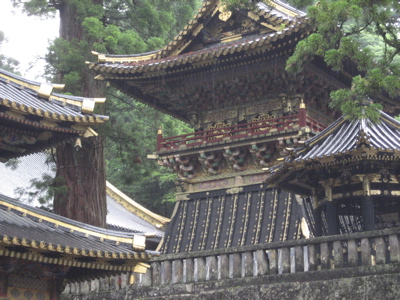 Neither of us is a morning person, but we need to accomplish this ride within a defined time frame for two reasons: first, we need to pack and check out of the inn. And second, we need to meet Maiko, the bookkeeper from my bike shop in Seattle, at the train station at 0930. By odd coincidence, Maiko is in Japan at the same time as me. She is going to guide us into Kanuma, her hometown, where her family would entertain us, or even better feed us. After considerable time around Japanese, I have learned that punctuality is a big thing for them. In Seattle, I often show up late just to make Maiko mad, but for the sake of her family I decide to make a good effort. Maiko said 0930 we must be there at 0930.

So we leave the inn and head for the mountain. We don’t have time to waste: we’re on a mission. I’m making homeboy crazy because I keep trying to push the pace, then I slow down for him to catch back on. My yo-yo’ing is pissing him off, so homeboy takes the lead. We finally get to the foot of the real climb. The road becomes two-lanes; both going up. We’re really kicking out watts now. The sun is warm on my limbs, and I’m feeling good. The road is something else though. There’s no less than two dozen switchbacks. Every other minute a motorcycle or two passes us with an angry petrol-burning snarl, but it’s the buses and cars that are crowding us. We finally reach the top a little more than an hour after setting off. 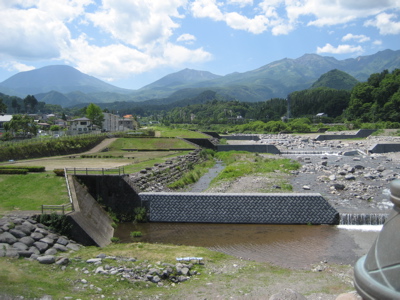 We’ve achieved the peak, or rather the little tourist village at the mountain lake. Homeboy wants the obligatory picture at the lake.

Time to turn and burn! Downhill is going to rock, especially the separate downhill road devoid of oncoming traffic. I take the lead because I already know that I descend the twisty stuff faster than homeboy. We’re a little behind schedule, so I yell for homeboy to head for the shower and I’ll meet Maiko at the train station. Then I let go of the brakes and plummet. I won’t hear or see homeboy for a while.

The single lane has a lot more tree cover than the previous trek, and the brilliant sunlight flashing through the leaves is dazzling my eyes as I rocket into the first hairpin. I hit the brakes well before the turn to calibrate myself for the speed, turn radius, and roughness of the road. Then each turn after I hit brakes later, work the bike closer to the edge, going guardrail to guardrail. The switchbacks are tight, giving me little room to gather a lot of speed. I round the 3rd or 4th corner and sight a minivan. I’m on top of him in no time. The driver lets me pass him to the inside as we exit a corner and I know I won’t be seeing him again. Once I’m in front, he’s history.

A few turns later I come across another minivan, and I’m all up in his rear window in no time. But this guy just can’t seem to get out of my way. I make it clear that I want to move up on the inside, but he brakes late into the turn and ends up giving me no room. I’m thinking that if I could just get by this guy he could go back to a leisurely joy ride. You’d think he’d just want to let me go and be done with me. This goes on for a couple more switchbacks, and then I figure it out: the f##ker is cutting me off on purpose!

In my head, I turn the switch from safety to psycho to claim this whole f##king mountain as my own, you tosser! Prepare for combat!

The next five hairpins have me swinging back and forth, sprinting hard trying to get ahead of him before he cuts me off. I’m on the inside, the outside, trying to squeeze past. I’m making this c### work those brakes. He’s going deep into the turn on the outside before nearly locking them up so he can totally cut the apex off at slow speed and deny me the inside line. I try going for the outside, but I have to scrub too much speed can’t quite cover the outside distance fast enough before he’s on the gas.

I never see this guy’s face, but as an ex-messenger, I don’t need to see his face to know him. I’m watching the minivan the way it moves under braking, the twitch of the wheels in the middle of the turn his every mannerism expressed through the machine. And I can read him like a book. I know how he’s gonna react before I make my move.

Coming out a righthand hairpin I sprint for blood, pulling up on his right flank, trying to grab some space between the enemy and the guardrail before the left turn. He’s on the gas all the way till he hits the brake, trying to squeeze me dry of speed by forcing me to take a constant radius turn along the guardrail. Then I hit the brakes HARD, almost to the point of bringing the rear wheel off the ground. As Minivan-baka drifts past me in the middle of the turn, the inside line opens up, and I lunge for it.

The road is so steep that all these switchbacks have paved transitions at the apex where the road almost overlaps itself. A car or truck could never put a wheel on these transitions without fouling its chassis. But I drop down the transition like it’s a bmx start ramp 2 meters ahead of minivan motherf##ker.

Now I own you.

I sprint head down for the next hairpin, seizing the middle of the road for myself. There’s no room for a car to get around me on this steep lane without a shoulder. I swing to the outside and hit the brakes deep, working the tires to their limit, almost kissing the rail on the exit. Minivan-baka can’t touch my speed in the turns and utterly lacks the acceleration to make up for lost ground. Two more turns and he won’t even see me.

Down and down I go and catch 3 more minivans why only minivans? and all painted white too. but they just ease up and let me by the minute I catch them. The road then straightens out pointed to Nikko and then falls out from beneath my wheels. Wow, whereas the twisty turns at the top had kept me from going all that fast, now I am just plummeting freefall. 80kph. The bike goes a little nervous under me but I never touch the brakes. The single lane merges into the main road, dropping me right behind a red hatchback headed toward Nikko. I jump into the draft and hold 60-70kph for three kilos before my pacers pulls off and the road levels out.

I’m still motoring into Nikko, looking for the turn into the train station when homeboy catches me. He can’t catch me on a descent, but he’s a far better time trialist then me. Turns out that minivan motherf**ker let him off easy after his defeat. After homeboy points me to the train station besides being bad at time trials, I’m hopeless navigating. I reiterate that he should go to the hotel to shower and pack ahead of me. I knew from the start that I would be the one to finish this.

I swing into the station just as Maiko is stepping out.

It’s 9:29 in the land of the rising sun. Mission accomplished.