In his second post, Mark V reports on Easton, Truvativ, and more.

Vegas is best taken at night when the neon lights are wondrous and sidewalks are chock-a-block full of revelers. During the day, the sun is too hot and a billion f*ing times too bright; the natural light vindictively pointing out the strained artificiality…kinda like seeing Celine Dion in person. 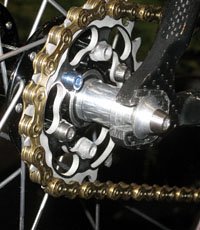 One of the big industry moves this year was Bell Sports’ acquisition of Easton. In the short run, there’s been a shake up on company reps and the product availability headaches during the transition, but we’ll have to wait a few months until the new designs hit the shops. For my part, I welcome the death of the “twin-thread” spoke design leftover from Easton wheel division’s previous identity of Velomax, in which the spoke threaded into the hub flange as well as having a standard nipple at the rim.

I talked at length with someone in marketing about the new anatomic version of the EC90 track bar, a 31.8mm wicked carbon hanger. Initially, he said they didn’t have an example, but he told me that an engineer was coming later with a special treat. It was like the candyman coming to a rave, because the guy brought a prototype rear track hub with the new hub flange design, where the straight-pull spokes insert from the inside of the large radius, fat disc flange. But the sexy part was the splined cog that mounted like a Shimano “centerlock” disc rotor. Expect it to be available in early spring strung to a high profile Easton carbon rim with 28 spokes.

Oh, and just as I was grinding my teeth in pleasure, they whipped out the Ergo Bend EC90 that I’d been craving. Is it “stronger” than a steel Nitto B127 keirin bar? Maybe, maybe not … but in the 20 seconds when I was left alone in back of the booth I couldn’t break it.

The tragic consequence of every major company sourcing product out of Taiwan and China is the decline of the Japanese bicycle industry. Every year the Japanese section of booths gets smaller with less product. With Suzue giving up making their pretty NJS-level Pro Max hubs, quality, high-flange track hubs from Japan have all but disappeared. Sugino did have some of their superlative “Giga” series cogs and chainrings for keirin; though at $110 retail for a cog, you ain’t gonna see these on beatdown fixies locked to street signs.

Shimano had plumped for a great big spread of the convention floor, but the only track-specific item in all their displays was a wicked light rear disc wheel that the “Big S” plans to bring into the states next year under the rather generic-sounding “Pro” label. Depending on whom I talked to, the “Pro” products (including stems, bars, saddles, and accessories) are made in Japan or the Netherlands. The 730gr hollow disc has an aluminum hub and rim with opaque, white mylar skins connecting them. The wheel gets it rigidity from the skins being under tension, in a manner not unlike Melanie Griffith’s face, only with less botox.

One of my favorite wet dreams involves, among other things, a Dura Ace track crank with an integrated bottom bracket ala the 10 speed 7800 crank. Much like that dream involving Lucy Liu and a tuning fork, sadly this will not likely come to be. The biggest market for Shimano track products is Japan’s keirin scene, whose stringent rules prohibit anything other than a 3-piece crank. Since the newer integrated crank/BB systems are really 2-piece cranks, Shimano has no incentive to develop a replacement for their 7710 track crank, a 3-piece design albeit with a splined 22mm spindle. Booo!

Still stinging with rejection, I trudged over to the Bianchi booth to look at their fixed gear offerings. I took note of the Pista Concept’s new pearl white paint just before I realized that I was staring at the crankset of my dreams. Honkin’ stout arms and spider radiating from a big mother hollow spindle, nestled inside of huge outboard bearing cups. The whole, slab-sided aluminum crank was polished silver and tastefully laser-etched. Running my naughty fingers over and around the spider, I could tell this was a forged piece; though lacking the delicate webbing of the Dura Ace 7800 road crank, this Truvativ crank nonetheless was cleanly shaped and well finished. Interrogating the people at the SRAM booth (parent company of Truvativ) revealed that this “Omnium” crankset was designed from the beginning as a crank with track-standard 144mm bcd (bolt-circle diameter), rather than being a relabeled 130mm bcd road crank. SRAM must be serious, because no one goes thru the trouble and expense of forged construction unless they plan to make a lot of an item.

You won’t find any reference to the Omnium crank in any SRAM or Truvativ catalogs, and most SRAM people haven’t even heard of it. But obviously there must at least one track fan on staff who knows what makes a real track crank. Look for a early 2007 availability.