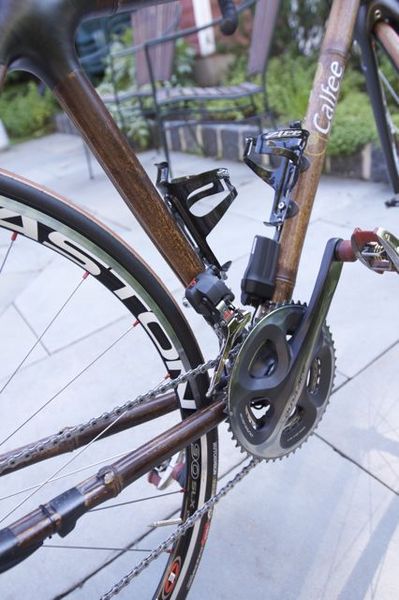 I’m a huge fan of SRAM. That’s likely seeming like an odd way to start a review of Shimano’s electronic D2 shift system, but I think it’s a rather important contextual point. In the last fifteen years of riding bikes I’d always had Shimano guts doing the heavy work, be it mountain bike groups (like the first XTR, which I still have) or on the road (where I’ve ridden everything from Tiagra to Dura-Ace) I started as a hard-core Shimano rider.

When SRAM’s Force group came along I was smitten. While Shimano parts had always been top-notch, there was something about SRAM’s Force that really spoke to me. The Double-Tap shifting system fits my riding style and there was a crispness to the shifting that I felt was agiler than the then-standard 7800 series Dura Ace.

By the time that 7900 came along I was already riding with SRAM Red on my bike, and participating in an unprecedented campaign to lighten my ride thanks to the lower gram count of the grouppo. I was (except when testing bikes) perfectly content to ride SRAM into the sunset.

As a lifelong gearhead, however, I was instantly drawn toward Shimano’s Di2 announcements like a moth to a flame. After seeing the disappointing performance of Mavic’s wireless blunderings in the electronic shifting space, I was hoping Shimano could pull this off.

Before the complete Di2 overhaul, the Bamboo (I call it “Woody T. Bamboo”, although that’s a misnomer as bamboo is a reed, not a tree) was decked out with the SRAM Force group that came off of my more racing-centric Calfee Dragonfly when the carbon bike went full-Red. As a result, the Bamboo had been spec’d with Force shifters and front and rear derailleurs, a Red crank and bottom bracket and Zero Gravity brakes.

Yesterday my local shop, Piermont Bicycle Connection expertly converted Woody from the iron age into the electronic age with a complete overhaul. With the mix of Force and Red cranks/bb the bike weighed in (with pedals) at 16.6 pounds. Not the most svelte, but hey, it’s made from grass. After the install, the bike dropped weight and now hovers at around 16.33.

In the last few decades, I’ve put tens-of-thousands of miles onto Shimano, SRAM and (to a much lesser extent as I never got used to the paddles) Campy, and the last thirty miles of riding on Di2 have instantly become some of my favorite.

When I made the switch from Shimano to Force, I did so because I was impressed with the thoughtless simplicity of the system–a lever for shifting and a lever for braking. While Shimano’s dual-control lever was a stroke (ahem) of genius when it came out, I felt that the single-directional nature of Force served me better in high-speed situations. This is a feeling that many Campy users have expressed over the years.

That’s not to knock Shimano, it’s just a personal preference.

When Red came out I found that SRAM had, in just over a season, addressed the shifting speed and accuracy needs of Force riders and that the system marked a pinnacle in shifting. Shimano’s Dura Ace 7900 clearly caught up to the shifting prowess of Red, but at that point, I was too heavily invested. 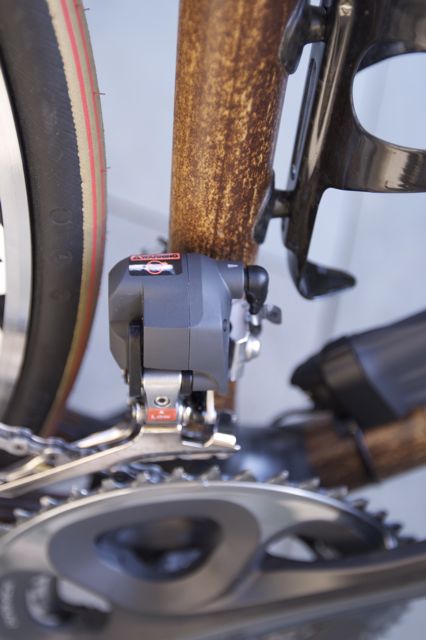 Di2 is such a radical departure because it amplifies the technical precision of today’s shifting system by coupling it to a much more accurate tool, the stepper motor. By being able to exactly and precisely move the derailleur cage without the need of any external shift cable is going to make a vast difference in the experiences of the long-term user. I’m looking forward to countless miles without changing shift cables or watching my performance drop as gunk builds up in the housing.

This, I think has been overlooked in many of the reviews, with most people talking about the immediate performance of the group and not the long-term prognosis for perfect shifting.

The group is also revolutionary when it comes to front shifting–no matter how smooth a system is, being able to shift the front cage under load is something that can’t be overlooked, and the front performance is enough to warrant the Di2 upgrade. So too is the interaction between the front and the rear derailleur, which allows the two to move in tandem and eliminate chain rub when cross chaining.

Many have also commented that the shifting feels “telepathic,” but I think that’s a bit overblown. To be sure, it’s necessary to think about the shift, even more so since you can’t do a batch of shifts with a single throw as you can with mechanical systems. What I’ve felt instead is the effortlessness of the shifts. A simple flick of the finger (akin to moving through images on an iPhone) is enough to drop or raise a gear even under heavy load.

We’ll be evaluating the long-term durability of the components, riding them in a variety of East Coast fall and winter conditions.

Even in the first few miles, I have a few areas where I’d like to see additional tweaks. The most obvious would be to have a press-and-hold action on a shifter move the rear derailleur through the cassette as long as the button is being depressed. This seems like a simple electronic tweak that would eliminate the criticism that multiple presses are required for multiple shifts.

I’d also like to see some sort of user-based control of the shift buttons. There’s no real reason why one has to stick with the assigned “front is easier rear is harder” setup, and in fact, I find that I have to retrain my mind when switching from SRAM to Di2 as to which button does what. It’s led to a few awkward fumble-at-stoplight moments so far.

Additionally, I’d be thrilled to have a user-interface to look at shifting and performance information, letting me see how many shifts I get on a charge, what kind of shifts I perform and when, etc.

From an ergonomic point of view, I’d love to see a way to tweak the reach of the buttons and levers in the same way that the SRAM levers can be pulled back to the drops.

I’d be very surprised if we didn’t see an electronic system from SRAM at some point (replace the cable in the cam with a sensor and you could still use the DoubleTap shifting motion to shift the bike) and I’d be more surprised if we didn’t see 11-speed options in future electronic setups but not in the mechanical models. (What better way to ensure precise 11-speed chain drops than with a motor?)

In any case, over the next few months, we’ll be coming back to Di2 to see if the system continues to feel as revolutionary in long-term use as it does at first blush and to see if it holds up to the season-long performance of SRAM Red.