Where some cyclists get OCD on their tire pressure, best commute times, and measure every watt they pedal, my thing is outwear. That’s driven by the rainy season here in Seattle and riding long miles in all kinds of wet weather. Each year I change up what I’m wearing to improve the “system.” In past years, it was bringing back wool liners. The most significant change last year was eVent. Tested and rode a Hincapie Signature. On mid-winter rides, @sgluckman rode with a prototype Novara jacket. The production version, called the Verita, is now available at a reasonable $189.00. I’ve had it for a few weeks and wanted to try the jacket out on a typical Seattle mid-week ride in various conditions.

Yesterday it was cloudy, drizzly, with squalls o’ rain, then sheets, and a chilly drop in temperature of about 10 degrees. While eVent certainly performs better than GoreTex for the weather I ride in, it has similar challenges. You’ll have to find the best liner that works for you to avoid getting too steamy. I don’t wear eVent over 50 degrees. Because once you get steamy, then vent, and get wet inside, that wetness doesn’t pass through the membrane (cause it’s insane in the membrane!). Once vented and wetted, you’ve got a tropical micro climate going on. That’s easy to maintain at tempo on the bike, but not when you stop or slow down. In other words, you can get cold real fast if you’re just wearing a thin liner and a jacket.

As well as the Hincapie performed and looked “Pro,” it was really just a shell. I suppose mid-race, Big George would go back to the team car and put it on. Anywhere else, black is unacceptable for riding in the rain. Unless you ride Ninja style, you want to visually pop on the road. The one kangaroo pouch in the back is impossible to access while riding and there was no bright piping for more visibility. eVent worked good on that jacket, just not technical enough for the non-Pro cyclists.

The Verita is a more technical jacket with taped zipper pockets on the chest and the back. It also comes in Orange Sherbet instead of the Northwest standard banana yellow pudding. Novara spec’d the jacket with a two-way zipper to “cape out” the steam instead of pit zips. Get too hot on a climb, open the bottom of the jacket to breathe. That’s a functionally good idea, but crunchy taped zippers are very hard to pull, especially with fingered gloves on. Caping the jacket also avoids water coming in from pit zips and you can (with a struggle) zip it back down. You’re most likely going to stop for pit zips. 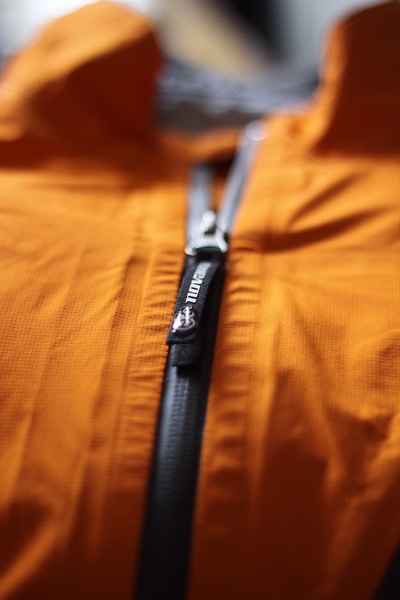 Put a stale corn tortilla in the back pocket of an eVent jacket to test if one ride would steam it. Yup.

To test how well eVent breathes, go for a ride and then put your hand in the pockets. You could capture that water, mix it with lanolin, spice scent, and bottle it as a manly moisturizer. Seriously, those beads demonstrated how well this jacket works.

For a commute, unless you’re throwing down a challenge at every stoplight and hill, you can moderate your temperature. It’s when you’re hanging onto a paceline or driving up a climb, that the limits of any breathable membrane get tested.

As I wrote last year, eVent is significantly better for cyclists than Gore. I highly recommend this jacket; especially at the price point.

Finished my ride yesterday with Leif from Starbucks. He works in the IT department and commutes on a Cutter Fixie. Rode up next to him, around Alki and we got to chatting then noticed, “hey you’ve got the same jacket on!” 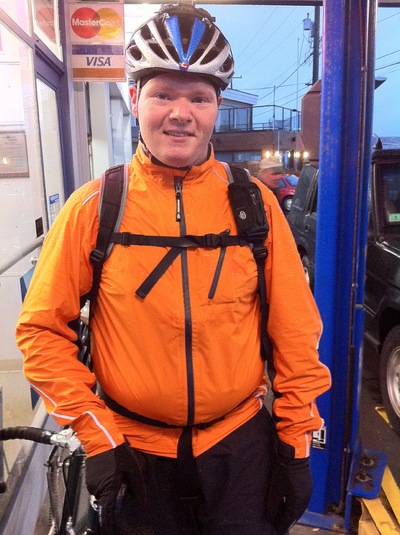 He loves his. Others have commented that

Check how bright the piping is on Leif’s arms. When cars would pass us on Alki, we lit up bright. That’s what you want in a Winter rain jacket and you can open and close the rear pouch while riding.

Tip: when the jacket stops beading water, soak it in Nixwax.