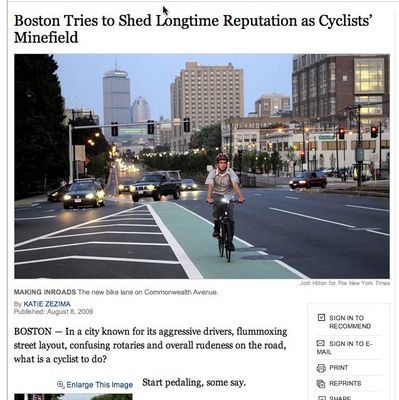 What do you get when you combine a metropolis that’s known to be cycling-negative with a mayor who’s a bicycling convert? You get Boston, a city that, according to this New York Times article, is working overtime to try and make Beantown more bike friendly by including feedback from cyclists, more bike lanes and the overhaul of a paved trail system.

Of course, Boston’s only added four miles of bike lanes since 2007 with plans to add five to ten more by the end of the year. To put that in perspective, New York City put in around 200 more miles of bike lanes, putting Boston’s recent growth at 1/14th the rate of NYC’s, even if you stipulate that they’ll put in ten more miles by the end of this year.

Still, change is change, and you’ve got to hand it to Boston for trying to improve the lives of cyclists. Now if only they could help out their baseball fans.