When visting a place that changes your worldview and resets how you think of life in general, it takes a while to process that and then even more time to best explain it with words that are more insightful than, “amazing, fascinating, interesting.” Bike Hugger has been to China 3 times and with the Olympics approaching, I wanted to share our previous coverage and some thoughts. 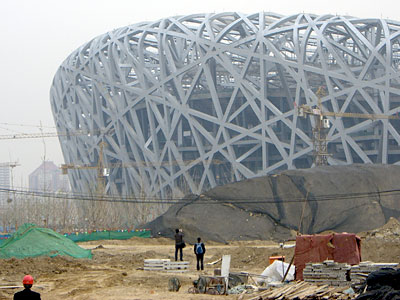 While in Shanghai, I wrote

Experiencing one of those jet-lag time shifts, where the earth seems to pause on its axis for a moment, I thought “economic growth ain’t pretty.” Pro photographers must have a special Shanghai filter that lets light pass through and blocks the smog. No matter who the architect is, however much shiny metal, glass orbs, or “Blade Runner” futuristic aesthetic the city offers, it’s still dirty, dingy, and gray. There’s a contrast between the words of hope, progress, hard-work, social-capitalism and “segregated, soulless, and exploitive.”

And of cycling in Beijing

In a city with 13 million people, 3 million cars and millions of bikes, riding is a chaotic experience. We just rode, found a way through it, and joined the flow in Beijing

The flow is what I remember most. How the city functions and moves. It’s best to just step or bike right into it, instead of trying to ponder it. Once you feel it around you, China makes a lot more sense. 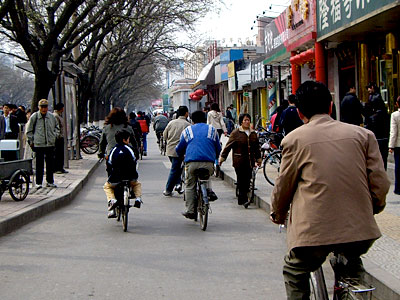 Face is very important in China. Jokingly, I said in Shanghai, it’s better to “look good than to feel good.” We’re watching that now with Beijing’s final prep for the Olympics. They’re shutting down factories, closing roads, frantically cleaning up the city, teaching their citizens how to be western nice and talk crazy English. There’s a veneer in China – you notice it as a Land Rover passes a peasant or the wood-panel finish in your 5 star hotel is peeling behind the bathroom vanity. China is very good at copying and making Chinese versions of Western goods. What I hope to learn post Olympics, is who China is next. What’s the face going to show after all those visitors leave. 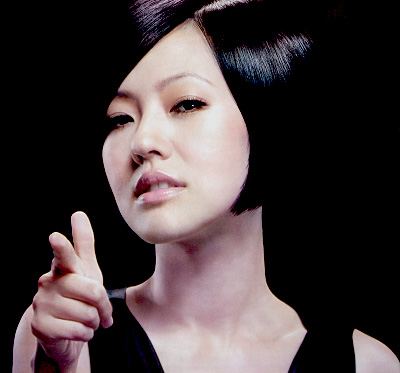 When I commented to our host that I couldn’t believe Beijing would be ready for the Olympics, he said, “never underestimate the will of the Chinese people.”