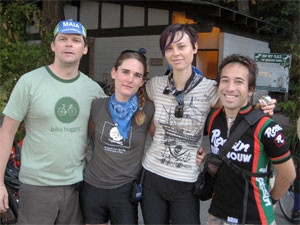 That’s me, Abby, Amanda, and Mark posing together at Seward Park after riding together with a group of cyclists from the Space Needle. We joined the Ditty Bops for part of their ride to Portland on Sunday and saw their packed Saturday night show at Chop Suey.

The Ditty Bops have been touring the country by bike, playing shows, and promoting cycling. Their record company arranged an interview with us the night of the show, but they were tired after driving back from NYC, and invited us to the ride the next day, which was even better. I showed up for the ride on Bettie, gave Greg their piano player and his wife Boo hugga tees, and it was a sunny, beautiful day.

We rode, chatted, and just hung out like any group of cyclists would do. I did ask both of them one, sort-of interview-like question, which was, “would you ride across the country again?” Amanda and Abby both said “yes, but not like that.” They enjoyed touring, but I think the rigors of the tour itself was wearing them out. John, teammate of mine, is riding with the ladies all the way to Portland where they’ll play the Aladdin Theatre in Portland, Oregon tomorrow night.

Later, when asked what the Ditty Bops were like I said, “creative, artistic, cyclists, and just nice girls.”