Running the kids around, errands, dates, and mostly delivering the goods is what we’ve been doing with Bettie. I’ve got suggestions for Stokemonkey, observations, and a movie after the jump. 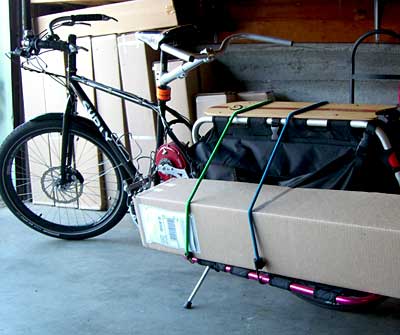 Reporting on a long-term relationship with our sport utility bike, it’s mostly good, with a few improvements we can eventually roll into a Bettie 2.0:

Over time with Bettie, I learned to just slow down. There’s an exhilaration with the power from the Stokemonkey and cyclists are genetically programmed for speed. So, I was always pushing it faster, running right of out battery, and blowing up my legs. It’s best to just let the Stokemonkey torque get you up the hill, at a leisure speed, instead of attempting to go 35 mph with traffic (blinging the bell at motorists …).

Slowing down on Bettie also lets you talk more to the people that want to know what the deal is with that red (Stokemonkey’s motor is bright red) thing on your big bike. Take Bettie out for coffee, park it, and watch they crowds gather, debate, talk and try to figure it out. A viral marketing plan for a longtail bike is to just ride it around and talk to people about it.

Check the Bettie Delivers movie. The clip shows me delivering 100 pound of Clip-n-Seals on the Bettie to Alki Mail and Dispatch for shipment to the Netherlands.