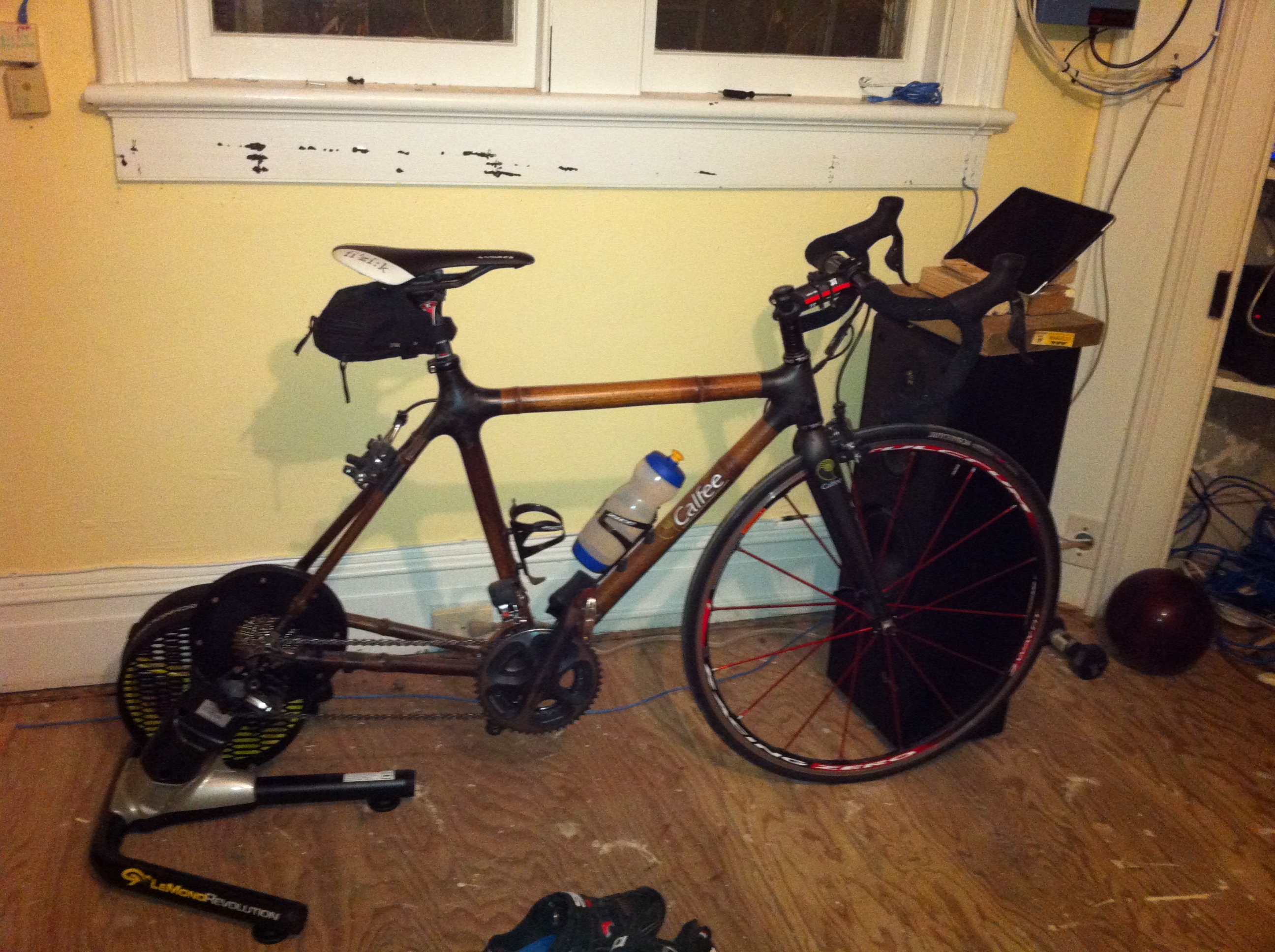 One of the few hits of the Interbike trade show this year was LeMond’s new Revolution stationary trainer. Eschewing the typical roller-bar setup that requires a wheel to be clamped into a friction-based trainer, the Revolution has a cassette for bike mounting. The trainer comes in two versions, one with a ten-speed Shimano/SRAM compatible cassette ($549) and one without a cassette (for your own gearing selection) ($499).

The proud father of a newborn son (Henry, or as I like to call him BikeHenry) I’m not planning to get a lot of time out on the bike this winter. Sure, I’ve already got the bike setup for pulling his trailer come spring (when his neck is strong enough to support his bouncing head) but for the remainder of the year, I’m staying close to home.

LeMond sent us a test unit equipped with a Shimano equipped drivetrain and I slipped my Calfee Bamboo (with Di2–possibly forming the most expensive stationary trainer in the world0 onto the mount. There are only three bolts to tighten to assemble the trainer and anyone who can change a rear wheel will be able to get going in a few minutes.

As you can see, I’ve set up a high-end mounting station for my iPad as my training entertainment center. (I’m mostly streaming Netflix content–my god Alice in Wonderland was terrible. What happened?) Since those are scrap pieces of wood the total cost of assembly came out to something like $.05.

So how does it feel?

In my workouts so far the bike clearly feels more like a road bike than any other trainer I’ve ever used. Since the friction is connected to the cassette there’s no spin-up time when accelerating like other trainers. Of course, there’s also no easy way to slow down by tapping the brakes as might be the case with wheel-mounted models.

Still, that’s a non-issue as the Revolution solves many of the common trainer issues, the biggest being the annoyance of running through tires on the harsh rollers of a trainer. It really is astounding no one has thought of this before.

Aside from bike-based flex (the Bamboo has a lot of bottom-bracket movement) there’s no movement on the Revolution. Standing and sprinting feels as secure as sitting and spinning and just like with a real road ride it’s best to shift gears right before standing.

The setup is also quieter than most trainers–without the wheel-on-metal whirr of a fluid or magnetic trainer workouts are an order of magnitude quieter.

There are only a few drawbacks to the Revolution. Without a wheel there’s no way to measure one’s speed–there goes the idea of maintaining a certain velocity for a certain period of time. There’s also no way to use a hub-mounted power meter to see wattage output.

There is an accessory unit available for the Revolution called the Power Pilot that calculates watts, calories, cadence, speed, distance and heart rate; in essence it transforms the Revolution into the ultimate trainer. AT $349 the unit is expensive (it’s just a tad cheaper than the trainer itself) but for a cyclist looking to get the most from their training and to do so on their own bike, the combo is the best option out there. (We’re going to see if we can get one in to demo.)

Since the Revolution is the official monitor of Team Garmin I’d be stoked to see an upgraded model that broadcasts speed and power to a Garmin Edge head unit as well, so that I could import the data in my training software, but the head unit is close enough.

Naturally the Revolution won’t help you smooth out your cadence the way rollers would, but the lack of friction from a wheel-based system does make it a much more natural ride and you can feel when you’re pedaling squares. Since I hate riding rollers (I have to concentrate too much and I end up not being able to distract myself with a movie or TV show) the Revolution is the perfect solution for me, as I expect it will be for many people. The trainer has already shown up at several Cross races Bike Hugger has attended this season.