I’m back home in Seattle, getting caught up on postings, and photos. Mark V is on special assignment for Bike Hugger@Interbike and sobered up from all the crazy partying to email his day one report.

Fixed and Loathing in Las Vegas, Day One

I strode out the plane, past the airport terminal’s slot machines, into the baggage claim. Next to me, the tanned blonde’s floral print top looked like a tarp pulled tight over a pair of F-16 jet fighter nose cones; nothing’s for real here in Vegas. But I’m not in this city of blackjack and 24-hr liquor stores to talk about reality … or aerodynamics. Byron said to find the fixed gear junk at Interbike, and that’s what I’m going to do … no matter how many $9 rum-and-cokes it takes. 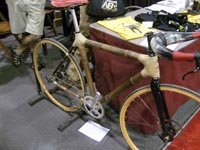 I brought a hangover with me as my companion on the first day, and it told me to steer away from the brighter, louder vendor booths. Then I thought I was seeing things when I found my first fixed gear bike: a bamboo frame with Avid mech discs and cowhorns. Clearly, I had wandered into the Calfee Design booth. Calfee was manipulating carbon fiber into perfectly useable (even sexy) road and track frames back when hot girls were still publicly dressing Greg Lemond in yellow attire, well before the current flood of carbon frames from Taiwan. Now carbon bikes are to masters’ racers what cocaine was to 80s businessmen … self-indulgent, expensive, and additively glamorous. Whether it was boredom or perversion that led them to building bamboo frames, I salute Calfee for a stylin’ answer to the question the consumer market wasn’t asking. Calfee says the bike rides exceptionally smooth because of the natural qualities of that species of black bamboo … WHO CARES! It’s a freaking bamboo fixie! I’d like a double scoop of that craziness myself. Hell, the cowhorn handlebars are really cow horns! You can’t f* with that!

Walking the floor at Interbike is like wading into a Northshore riptide … once you lose sight of where you came dove in, you’re lost. Product is swirling all about you, you don’t know where you’re going, and you could drown any second … only it’s not seawater but product literature that’s swallowing you up.

Co-motion was displaying a steel road fixie with those clever S&S couplings. For the uninformed out there, S&S Machine makes a high precision fitting that once brazed into the top and down tubes of a bike allow you to separate the frame into 2 pieces. The whole point of this exercise is to make it so that you can pack the bike into a case that airlines will take without raping your wallet. From personal experience, I can tell you that nothing makes packing a bike in small S&S case easier than throwing out half the components.

At the Alpha-Q booth, they hung a Crumpton carbon fixie with one of their lightest forks. After several years of seeing loony Germans duking it out to build ever-lighter sub-11lb bikes, I had wondered what would happen when someone figured out that the lightest derailleur was no derailleur at all. Seven pounds 6 ounces is it. That carbon fiber brake caliper puts the flagrant disregard for pragmatism and expense right up front. The most interesting single part was the cog held on by six bolts much like a disc brake rotor, reducing the weight of the hub and eliminating a lockring.

The end of the first day found me desperately searching for the exit, apparently marooned in the bmx section. One vendor booth deployed a small army of bouncing miniskirts to demo a helmet with speakers for your iPod pre-installed above the ears. This one buxom bird with black streaks in her blonde hair stood in my way and inquired if I would like to try it out. I looked at those big, beautiful … uh, eyes. I said “okay.” She was pulling it down on my head when I got to thinking about how many other people’s heads she’d put this helmet on today. But maybe this is an out-dated way of thinking … I mean, who gets insecure about that kinda thing nowadays? It’s only head.